Wild One in Kamloops: Blazers Prevail 7-4 Over the Giants 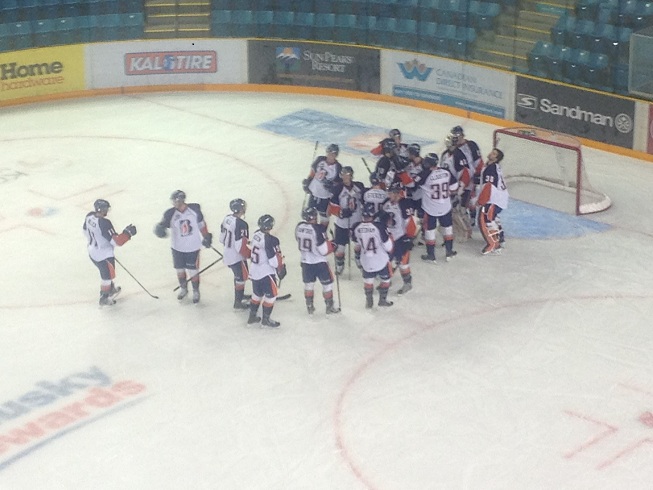 VANCOUVER, BC – It was supposed to be just another pre-season game, the 3rd for both Vancouver and Kamloops. But whenever Don Hay is coaching against his former team, it shouldn’t be surprising to see some fireworks. And this night was filled with them, especially in the final 40 minutes.

The 1st period was very evenly played with both teams picking up the intensity as the 20 minutes wore on. The goaltenders, Tyler Fuhr for Vancouver and Taran Kozun for Kamloops, were quite busy and quite strong, especially Fuhr on a lengthy Kamloops 5 on 3. The defensive game for both teams was also at a high level, with guys diving to block shots and break up plays. The end result was a scoreless 20 minutes with shots 10 apiece.

The 2nd frame was frantic to say the least. The two teams suddenly started to loathe each other and would beat up on each other and take cheap shots at every opportunity. Despite all sorts of big hits, slashing, checks to the head, and roughing penalties, there were no fights, even though a few players certainly thought about it.

Amidst all the rough stuff, there were also plenty of goals to talk about. The Blazers scored 3 unanswered; the first 2 were both 4 on 4 breakaways (Cole Ully then Dylan Willick). That marked the end of the night for goaltender Tyler Fuhr who made 15 saves on 17 shots, many of them of the highlight variety. Jackson Whistle took over the rest of the way.

Just 2 minutes into Whistle’s presence, a 4th line goal by Rob Trzonkowski put the Blazers up 3-0 before Ales Kilnar answered back for the Giants 36 seconds later to cut the lead to 3-1. Then with just over a minute left in the 2nd, Cain Franson (biggest stand-out for Vancouver through 3 pre-season games) snapped a perfect shot from the right circle, high-glove on Taran Kozun (who played the entire game for Kamloops) to get the Giants to within 1. But only 28 seconds later, Kamloops answered back on a scramble; Brendan Ranford finished it off with 35 seconds left to put Kamloops up 4-2 through 2 periods.

In the 3rd, a bit of a strange sequence occurred early, when Taylor Makin appeared to score on the power play, but the referee waved it off and play continued. Tyler Morrison scored shortly thereafter, but upon further review, the Makin goal was legitimate and went to him. It was the Giants first power play goal of the pre-season, and cut the lead to 4-3. However again, only 27 seconds later, the Blazers responded, and it was another breakaway goal by Dylan Willick, his 2nd of the game to make it 5-3. The Giants would climb back to within one after Brett Kulak finished off a pretty 3-way passing play with Blake Orban and Cain Franson, and with 8 minutes left, it was a 5-4 game.

But with just less than 2 minutes remaining, some hard work by Willick and Ranford paid off in Ranford’s 2nd goal of the game and the Blazers re-established their 2-goal lead at 6-4. They would add one more in the last minute on an empty net (Jordan DePape) to ice the game and make it a 7-4 final.

Vancouver finished the night 1 for 7 on the power play while Kamloops went 0 for 4.

Vancouver’s record in pre-season is now 1-2, while the Blazers improve to a perfect 3-0.

Even though it was just a pre-season game, both teams clearly wanted it badly with the way things transpired, and you can expect a carry-over effect in what is now a highly-anticipated rematch in Ladner on Friday night.