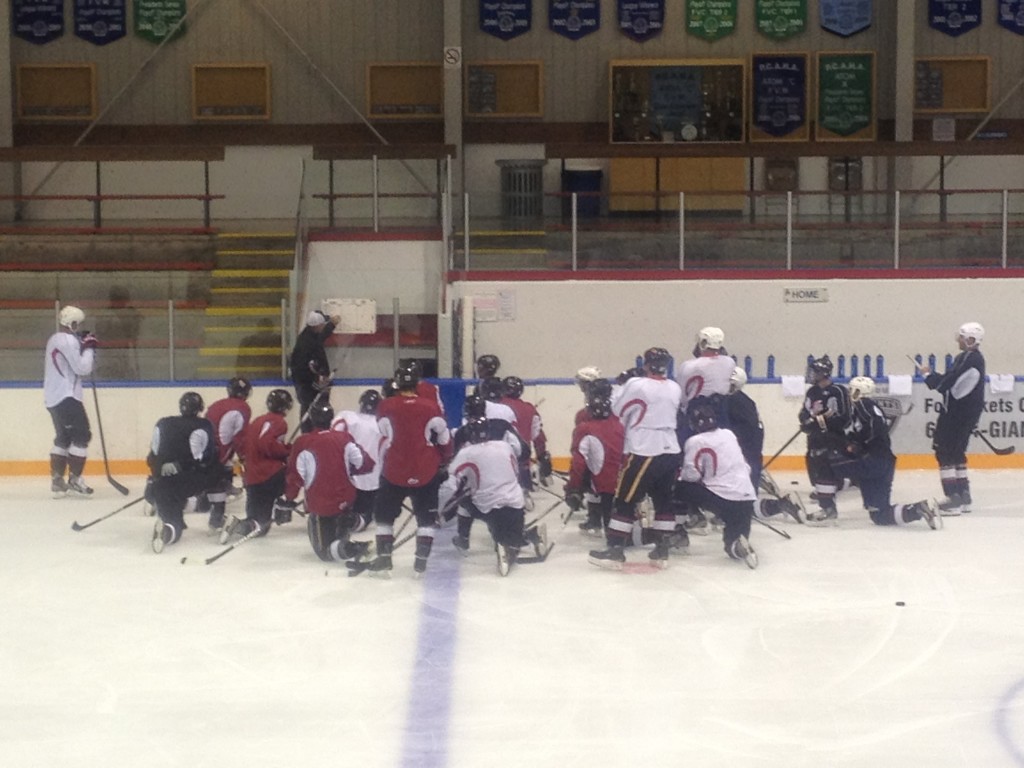 As of Thursday morning, hardcore Giants fans, parents, scouts and staff have been living at the Ladner Leisure Centre, checking out this year’s crop of youngsters and Giant hopefuls, along with a sneak peak at the returnees all looking to make strides this coming season.

There were a couple of notable absences in the first couple of days, including Marek Tvrdon, who is still unable to leave his hometown of Nitra, Slovakia, and the team’s 2011 1st-round pick Thomas Foster, who might be forced to miss a couple more days due to injury.

Despite this, the action has definitely intensified over the course of the 2 days, and overall, the camp hasn’t skipped a beat.

The focus has been mostly on the rookie camp with 1996 and 1997 born players (most of the draft picks from the last 2 years). There was also a bit of a tune-up for the main camp players, who will see a lot more action come Saturday night moving forward, when the first set of re-assignments are made after rookie camp and only 2 teams total are left. Meanwhile for day 2 on Friday, the main camp roster was merged from 3 teams down to 2 to make scrimmages and practices more managable.

The format for the games is a unique one, with the teams playing three 25-minute mini-games, alternating lines on the whistle (to give everyone equal opportunity), and the score re-setting to 0-0 after each mini-game/period. They players get a regular intermission break after the 1st period/mini-game, and then play the next 2 periods straight through. After that, the game would finish with a 5-man shootout, which is always entertaining for the fans.

So the rookie camp is comprised of 4 teams (which have recently been shuffled up, details below): Team Black, Grey, Yellow and Red. Each team had one practice/skate and one game on Thursday, while on Friday they each just played two games.

The camp is definitely a serious wake-up call for all those involved, as the day is around 12 hours long starting early in the morning and ending after dinner time. It’s go-go-go all day long, and as intense as the games get, the practices are probably even more grueling and demanding. If you’re not in shape coming to camp, it definitely shows. But despite Don Hay, Glen Hanlon and Yogi Svejkovsky putting the players through their paces, they all seemed to keep up and give it their all.

With that said, come game time, the pressure was on, and some players really stepped up to the plate. For Team Yellow, they were led by by 3 players in particular on both days. Listed rookie Alec Baer (15-year-old from Minnesota) was the stand-out player today especially, picking up 3 goals in his first game (three 25-minute mini-games) and adding another one in the later game, to go along with 3 more goals he potted in yesterday’s game (7 total). He received significant help from 16-year-old Liam Blackburn (from Prince George), who potted 2 goals on Thursday and 2 on Friday (4 total), as well as another 16-year-old, listed forward Nicholas Jones from Edmonton, who chipped in with 3 of his own goals over the 2 days.

The Black team had more spread out scoring over the first 2 days, with two goals apiece from Taylor Vickerman (6th-round pick in 2011 from Kennewick, Washinton, who just came off a gold medal win for US at the U-17 Five Nations Tournament in Czech Republic), 16-year-old forward Braiden Epp (from Prince George), 15-year-old Brendan Reichardt (from Winnipeg) and 15-year-old Arjun Badh (from Richmond). However they were still led by the guy who was expected to lead them – this year’s 1st-round bantam draft pick for the Giants, 14-year-old Ty Ronning (from Burnaby), who scored 3 goals total, one in each of the 3 scrimmages.

Team Red had a very successful Thursday scoring 11 goals in their only scrimmage, but struggled more on Friday with a combined 8 goals through 2 scrimmages. Their offense was aided by 16-year-old Devon Jerome (from Lethbridge, who’s 18-year old brother Jared Jerome is in the main camp), who scored twice in Thursday’s scrimmage, and picked up one more in the evening game Friday. Local forward Jonathon Evans (from Delta) impressed on Thursday with 3 goals in his only scrimmage, but couldn’t find the net in 2 scrimmages on Friday. 16-year-old James Severs (from Campbell River) also chipped in with 2 goals over the 2 days. But the star on the red team was, like on black, no surprise. It was the Giants 2nd-round pick this year (after Ty Ronning), 15-year-old Jakob Stukel (from Surrey), who scored twice on Thursday, and one in each game on Friday for a total of 4 goals. He made noise almost every time he was on the ice.

Finally, taking a look at the Grey team, they had a different player step up for them in each of their 3 scrimmages. On Thursday, it was 15-year-old Cameron Ankelwich (from Calgary) who scored 2 of his team’s 6 goals. In game one on Friday, it was 15-year-old Eric Malli (from Burnaby) with 2 of his team’s 7 goals, and then during the late game on Friday, it was 16-year-old Brodie Buhler capping off a 3-goal scrimmage with an empty-netter in the final mini-game. 16-year-old Landon Gross (from Lethbridge) spread out his scoring with 1 goal in each of his 3 scrimmages, and the Giants last pick of this past year’s bantam draft, 15-year-old Owen Sillinger (from Regina, son of former Canuck Mike Sillinger) had 3 goals over today’s 2 scrimmages himself. Another player of note, picking up a goal in each of his 2 scrimmages today, is 15-year-old Dexter Robinson (from Kamloops).

The Giants have 3 front-runner goalies at camp pushing for 2 positions (Liam Liston, Jackson Whistle and Payton Lee), but it was nice to see a couple of the youngsters really step up at times too and make a bid for the future, most notably Red’s Kurt Klimak (16-year-old from Langley) in today’s early game, and Yellow’s TJ Goldie (15-year-old from Medicine Hat) in the late game. Grey’s goalies also had a good late game, with 15-year-old Kyle Starinieri (from Langley) and 16-year-old Griffin Baillie (from Merritt) combing to give up just 3 goals over 75 minutes. 16-year-old Payton Lee, from Cranbrook (pushing 17-year-old Jackson Whistle for the backup role), also looked good in net for Black, giving up just 1 goal in almost 40 minutes of work in the late game.

It was also really nice to see some prominent Giants alumni on the ice training today and helping out the youngsters. This group, which will coach 3 on 3 against each other during the intra-squad game on Wednesday, includes Evander Kane, Cody Franson, Craig Cunningham, Lance Bouma, Neil Manning and now, Brendan Gallagher, even though he’s still eligible to return for his 20-year-old year, as unlikely as that is. These guys are having fun but also taking this camp seriously, as they prepare for their upcoming pro camps.

As the Giants move into day 3 of training camp on Saturday, both the day’s schedule and the rosters for each team have been tweaked. After rookie camp ends in the early afternoon, the coaching staff and scouts will discuss who they want to release, and which select group of players from the rookie camp will move on to main camp (likely somewhere between 8-12). The main camp teams will be tweaked at that point with rookie camp players added, and 2 larger teams will likely be formed that will proceed to the “main camp” in the evening. In the meantime, here is the new schedule for Friday along with the rosters for the 4 Rookie Camp scrimmages: