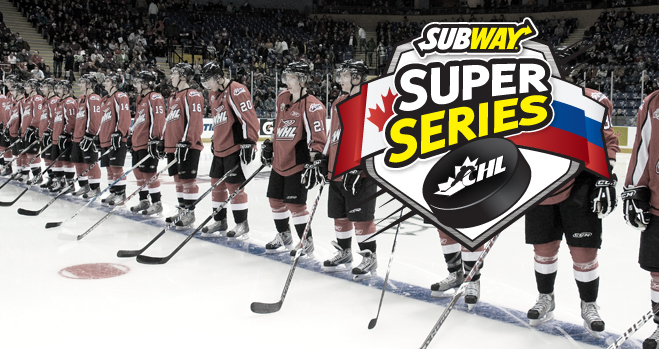 Vancouver, B.C. – The 2012 SUBWAY Super Series heads west as Team WHL readies to face Russia for the final two games of the six-game, cross-Canada tour on Wednesday night in Vancouver and Thursday night in Victoria, B.C.

Team WHL is made up of Canadian-born WHL players who are eligible to play for Canada’s national junior team in the IIHF World Junior Championship.  While WHL pride is on line in the two-game set, many players see the opportunity to play for Team WHL as an opportunity to make a positive impression on those who determine who wears the Canadian jersey come Boxing Day.

“It’s definitely a real good opportunity, and it’s a big honor to get chosen to play in the series,” said Mark McNeill, the captain of the Prince Albert Raiders, who is back for his second go-around with Team WHL.

McNeill is one of several WHL stars looking to use the SUBWAY Super Series as a springboard to a potential spot on Canada’s national junior team.  A first-round draft pick of the Chicago Blackhawks in 2011, McNeill earned an invite to the Canadian team’s selection camp last year, but missed out on a final roster spot.

Having been through the experience last season, McNeill at least has a notion of how to approach this year’s Super Series.

“I think it lingers in a lot of guys’ minds, but you have to make sure you’re not getting too distracted by it,” said McNeill, who has enjoyed a strong start to the 2012-13 season while helping the Raiders to first place in the East Division.  “You have to try and stay relaxed, and just go out there and play your game.”

Like McNeill, Red Deer Rebels’ defenceman will be suiting up for Team WHL for a second straight year.  Though he is well aware of the importance of making a good impression, Dumba says the experience is also about having fun.

“It’s going to be loads of fun,” said Dumba, who played for Team WHL last year as well.  “It’s always fun to get together and play with guys who you’re used to playing against, and see some of your buddies from around the League.

“I’ve always likes playing with my buddies like Morgan Rielly and Ty Rattie, who is having a great season, and it’ll be fun seeing the Edmonton guys and some of the other guys from around the League that you don’t normally get to hang out with,” said Dumba, the Minnesota Wild’s first-round pick, seventh overall, in the 2012 NHL Draft.

Dumba, like McNiell, attended Hockey Canada’s national junior team selection camp, but failed to make the squad.  As a 17-year-old last year, Dumba knew his chances of making the team weren’t that high.  This year, the Calgary, AB, product doesn’t plan on changing anything about his approach to the SUBWAY Super Series or a potential invite to the selection camp.

“Last year, I was a younger guy, and I think I did everything I could to make that team…I left it all out there, I think,” he said.  “This year is the same in that I have to go in there and battle hard, give it everything I got.

“If they have a position for me, then that’ll be great,” said Dumba.

McNeill, too, plans on keeping it simple for the SUBWAY Super Series.  After all, McNeill knows he earned a spot on Team WHL for what he already brings to the table.

“Same approach for me,” said McNeill.  “I don’t want to go in there trying to be something I’m not.

“I want to show my stuff, show the different aspects of my game, and show that I can play an all-around game,” he said.

Of course, getting a pair of wins over the Russians is also high on the priority list for the Team WHL players.

“The Russians are going to be a very good test for us, and they are highly skilled,” said McNeill of a Russian side that currently boasts a 2-2 record through the first four games of the 2012 SUBWAY Super Series.  “Everyone is going to have to bring their ‘A’ game, and we’ll have to put in some hard work, for sure.”

For more on the 2012 SUBWAY Super Series, visit www.subwaysuperseries.ca