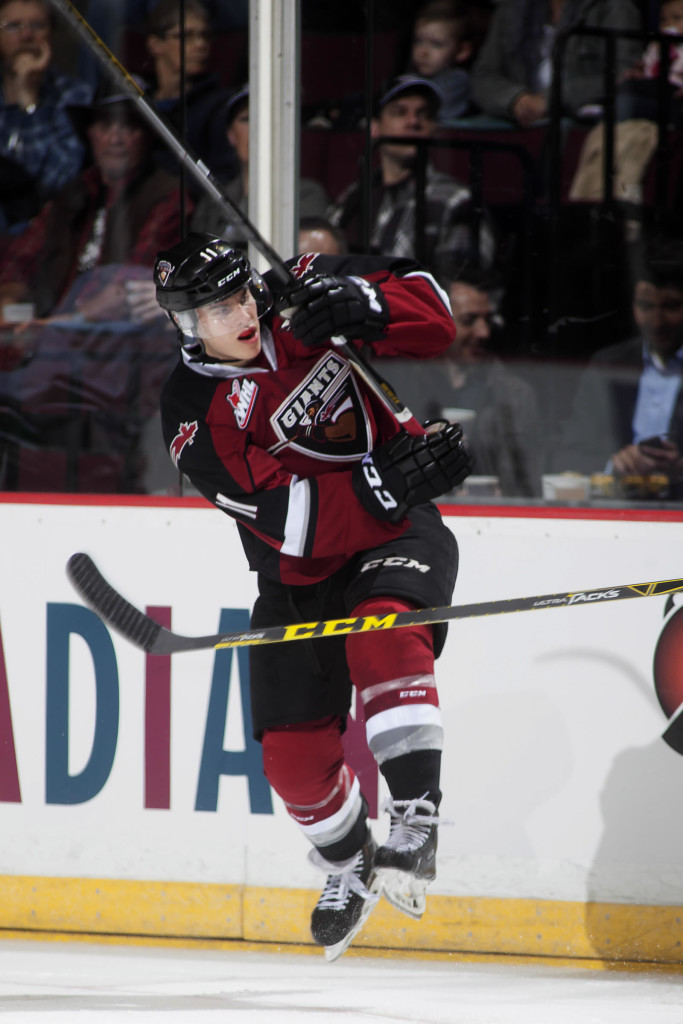 Jakob Stukel scored the game winning goal 1:50 into overtime as the Vancouver Giants picked up their first road win of the season, edging the Saskatoon Blades 5-4 on Sunday afternoon at the SaskTel Centre. Vancouver also got goals from Carter Popoff, Matt Barberis, Dakota Odgers and Ty Ronning.

Jakob Stukel scored the Insurance Goal of the Game.

The Giants continued their run of scoring the first goal in every game when Popoff found the net on a power play at 2:48 of the opening frame, knocking the rebound of a Clayton Kirichenko point shot past Blades net minder Brock Hamm. Vancouver got into some penalty trouble later in the stanza, but the G-Men went a perfect 3-for-3 on the penalty kill in the first period to maintain the lead.

Barberis extended the Vancouver lead early in the second stanza when he took a beautiful cross-ice pass from Dawson Holt and hammered the puck past Hamm for his first WHL goal. The Blades got on the board a couple of minutes later when Lukus MacKenzie tallied his first of the season, but Odgers answered back for Vancouver just 43 seconds later with his third of the campaign to restore the two-goal lead. Jake Kustra pulled Saskatoon back to within one goal when he found the net in the late stages of the frame.

Ronning re-established the two goal lead for Vancouver less than three minutes into the third period when he broke up a pass at his own blue line and skated in on a partial break before beating Hamm high on the stick side. The Blades stormed back in the third period to tie the game and force overtime, though, outshooting Vancouver 20-6 and getting power play goals from Cameron Hebig and Ryan Graham to force overtime for a second straight game. Graham’s goal came with just 21 seconds left in the third period.

Stukel gave the Giants the win with a power move to the net as he cut in front from off the right boards and tucked the puck past Hamm on the forehand to end the game.

The Giants will continue their road trip on Tuesday when they visit the defending Eastern Conference Champion Brandon Wheat Kings. Puck drop is slated for 5:00pm. Catch the call on TSN 1410.

Vancouver’s next home game is on Friday, October 16th when the Tri-City Americans visit the Pacific Coliseum. For tickets, click here or call 604-4-GIANTS.