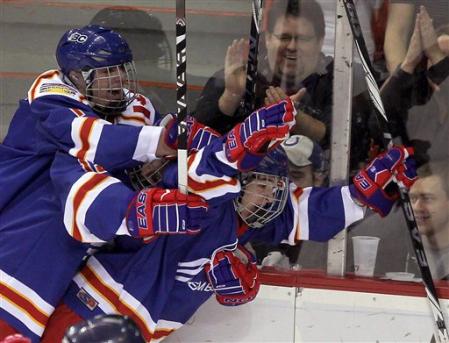 Congratulations to Vancouver Giants prospects G Jackson Whistle and RW Jackson Houck for helping lead Team BC to Gold at the 2011 Canada Games in Halifax, Nova Scotia. B.C. defeated Quebec 7-4 in the final in front of 9,234 fans at the Halifax Metro Centre. It is the first gold medal in men’s hockey for B.C. since 1979.

Whistle, who was selected 79th overall in the fourth round of the 2010 WHL bantam draft by Vancouver, made 28 saves in the final and finished the tournament a perfect 4-0. He currently plays for the Pursuit of Excellence Midget Prep team based in Kelowna, BC.

Houck had 2 assists in 6 games at the tournament. The Giants 3rd round pick, 57th overall in the 2010 WHL bantam draft is a member of the Northwest Giants of the BC Major Midget League and now a fixture at the Hockey Hall of Fame. His pant shell from the gold medal game will be on display at the Hall in Toronto to celebrate B.C.’s win.