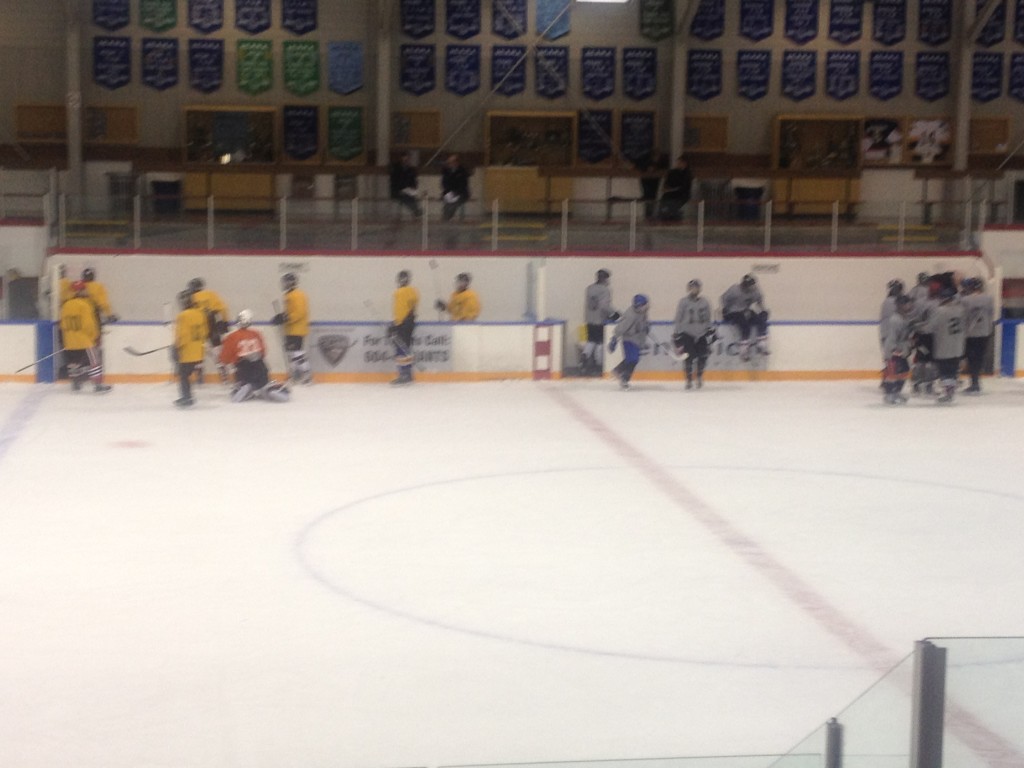 The first portion of Giants camp is now over and the Main Camp has officially begun with the roster down to 2 larger teams. These team’s rosters will then be condensed along the way (after today’s first set of releases, the next set of releases will come down tonight or in the morning tomorrow, and then possibly day by day moving forward to the intrasquad game Wednesday night).

In the meantime, there were only 2 Rookie Camp scrimmages this morning, as opposed to the 4 that were on the original schedule. Again these teams were coached by the various scouts in attendance, most of who have been at camp over the first 3 days, but several from out of town that are leaving tonight or tomorrow. The format was changed to a regular game instead of mini-games, and it was three 20-minute stoppage time periods instead of three 25-minute running periods.

In the 8 o’clock scrimmage, Team Grey had an impressive outing as they spread out the scoring among 7 players in a 7-2 victory over Team Yellow. The small but skilled 16-year old Kurt Klimek (from Langley) stood out yet again between the pipes, playing a perfect 2nd half of the game, not allowing any goals.

Then in the 10 o’clock scrimmage, it was a close game until late in the 3rd when Team Red pulled away with 2 goals to cap off a 6-3 victory over Team Black. Yet again, 15-year-old Minnesota product Alec Baer stood out with a pair of goals (multiple goals in all the games he played at camp) to lead the way, while the other 4 goals were spread out. Black had 3 different goal scorers in the loss as well. While Kurt Klimek (Grey) might be the smallest goalie at camp, the Giants 4th-round pick this year, goaltender Stefan Wornig, at just 15 years of age, might be the biggest guy in the whole camp combined. He stands nearly 6’5 and 190lbs, and just like Klimek, he pitched a shutout in the 2nd half of the game for his Red team.

Now while it likely won’t affect the Giants for this upcoming year, they had some injuries to significant prospects over the first 3 days, including 1st-round pick Thomas Foster and 2nd-round pick Jakob Stukel. Foster should likely be back later in the camp, while Stukel’s status is uncertain.

Here is the list of all the rookie camp players moving on to main camp tonight:

It is expected that only 4 of these players (Tyler Leicht, Reid Zalitach, Jake Kohlhauser and Shaun Dosanjh) will play in the scrimmage tonight at 5:15, while the rest of the players will participate in the 2 practice sessions surrounding the game.

*More releases will be made later tonight, and the rosters will be trimmed down again. The new roster for the 2 teams (Grey & Black) moving forward into tomorrow will be made and posted later this evening.