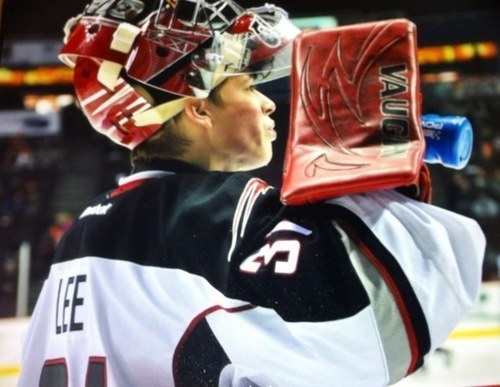 VANCOUVER, BC – He’s been labeled the goalie of the future for the Vancouver Giants, but we won’t know for at least another year. Earlier today, 16 year-old Payton Lee was re-assigned to the PIJHL’s (Junior B) Richmond Sockeyes, where he will get another year of development with the goal of joining the Giants full-time next season.

“He is our future,” Head Coach Don Hay confirmed. “But for now, we want him to go and develop and play as much as he can at the Junior B level where we can keep a close eye on him.”

What this ultimately means is that the Giants have settled on their 2 goaltenders who they will start the regular season with. One of them, no surprise, is 19 year-old off-season acquisition Liam Liston, while the other is a surprise training camp stand-out, 17 year-old Tyler Fuhr.

Don Hay indicated that “we feel these 2 guys have showed us throughout training camp and pre-season that they are ready to perform at a high level right now, and we are very optimistic about our chances to win every night with Liston and Fuhr between the pipes.”

The Vancouver Giants will wrap up their pre-season schedule with a home and home series versus Victoria this weekend, starting Friday in Ladner at 5pm, and then playing a 2pm matinee in Victoria on Saturday. Both goaltenders are expected to see playing time over the course of the 2 games.