Musil and Czechs Fall To Canada 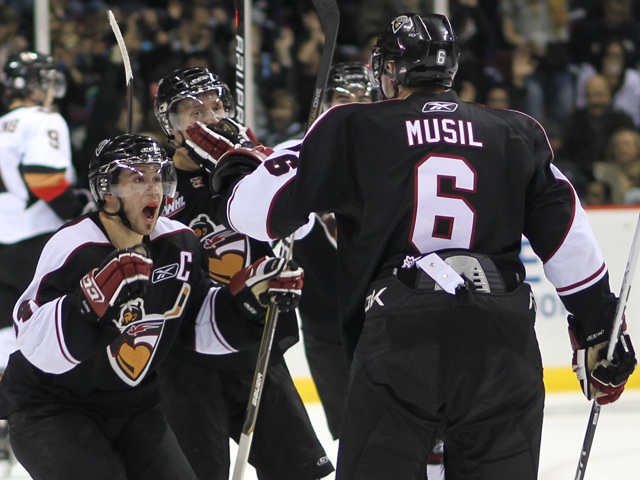 Canada defeated the Czech Republic 5-0 on Day 2 of the U18 World Championships in Germany. Vancouver Giants defenceman David Musil registered 4 shots, picked up 2 penalty minutes and was a -2 for the Czechs. Canada is 1-and-0 in the tournament, while the Czech Republic falls to 1-and-1.

Dresden – Thursday evening was the Canadians’ turn to step on the ice for their first tournament match. Their opponents were the Czechs, who turned in a surprising 2-1 victory over Sweden the night before.

Early on it became apparent that Canada wasn’t going to take their opponent lightly, as the first period saw three quick goals by the Canadians. Forward Eric Locke broke the deadlock just over a minute into the game, getting the puck alone in front of the net off a slap pass from defenceman Ryan Murphy and slipping it past the Czech goalkeeper.

Canada tallied another goal soon after when Alan Quine made a great cross ice pass to Morgan Rielly, who fired a wrist shot to the top corner to make it 2-0. A next goal from Mark Scheifele put the lead to three goals heading into the second period.

While his teammates were busy putting points up on the board, Canadian goaltender Malcolm Subban did not have much to do in the first two periods, needing to make only a handful of saves. As for the Czechs, penalties throughout the second period prevented any comeback attempts. By the end of the period the Czech attackers seemed slow on their skates and tired after spending so much time on the defensive. However, Canada mustered only four shots on net, none of them goals, and the 3-0 lead remained unchanged.

Despite staying out of penalty trouble for most of the third period, the Czechs weren’t able to get many scoring chances on Subban. That left the door open for the Canadians to increase the lead, and they did just that with another score from Mark Scheifele and a power play goal by Ryan Murray, who deflected a shot from defender Ryan Murphy to put his team up 5-0.

“We got a lot of players coming in who each play differently and have their own style,” said Subban after the game. “But if we can build on this and get some real chemistry going then we’ll be a tough team to beat.”