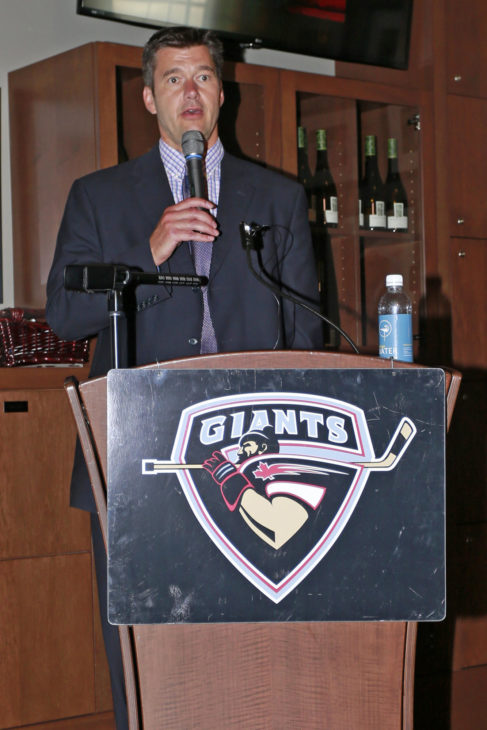 During his first season with the G-Men he led them to overtime in Game 7 of the WHL Championship Series against Prince Albert. Over the past three seasons, he’s led the team to a record of 92-49-7-4.

Dyck  is no stranger to the Vancouver Giants or the WHL. He spent three seasons with the G-Men as an assistant coach (2002-2005) and then spent three seasons with the Giants as a scout (2009), and their Director of Player Development (2010-2012). Dyck has 14 seasons worth of coaching experience in the WHL including a four-year stint (2006-2009) as Head Coach of the Lethbridge Hurricanes. During his tenure with the Hurricanes, Dyck led his team to a berth in the 2008 league finals and accumulated a record of 132-120-16. Dyck’s WHL coaching resume also includes a season with Medicine Hat as an assistant coach, five seasons with the Hurricanes as an assistant coach and most recently in 2013-14 he joined the Kootenay Ice for one month when Head Coach Ryan McGill was coaching with Canada at the World Juniors.

In June of 2021, Michael Dyck served as an assistant coach with Canada during their Gold Medal run at the IIHF World Hockey Championships. Earlier in 2021, Dyck was an assistant coach with Canada at the World Juniors and he earned a Silver Medal. He also earned a silver medal as the head coach of Canada’s team at the 2018 Hlinka Gretzky Championship. Additionally, he served as Team Canada Pacific’s Head Coach twice (2009-10 and 2011-12) at the World Under-17 Hockey Challenge. He also served as Alberta’s Head Coach at the 2015 Canada Winter Games and an Assistant Coach for Canada at the Youth Olympic Games in 2016. Dyck’s playing career in the WHL spanned five seasons (1985-1989). He played with the Calgary Wranglers, Brandon Wheat Kings and Regina Pats

Dyck is joined in Vancouver by his wife Char. Together they have three children: A daughter Bailey, and two sons Carson and Brennan.