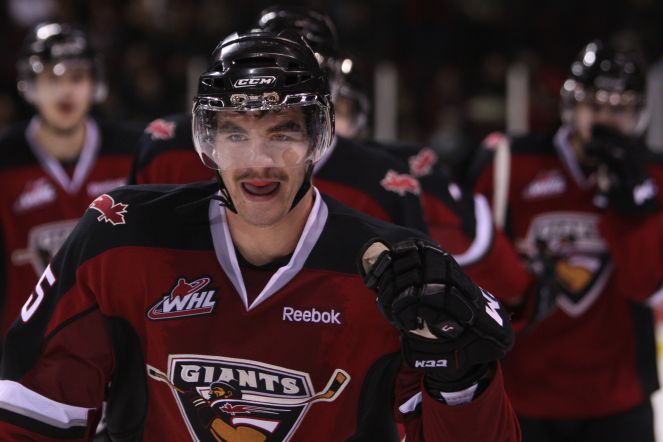 VANCOUVER, BC – It was a hot topic in the Giants rumour mill for quite some time, and today it has become official. Last year’s breakout sniper Jordan Martinook has signed a 3-year entry level contract with the Phoenix Coyotes organization, and will likely start the season with their AHL affiliate in Portland.

Martinook appeared in every single game for the Giants over the last 2 seasons, and after 28 points in the 2010-11 season, he erupted for 40 goals and 64 points last year, finishing 2nd on the team in goals behind former Captain Brendan Gallagher and 3rd in points behind Gallagher and Marek Tvrdon.

“This is exciting news for Jordan and we are all very proud of how far he’s come” said Giants Executive VP and General Manager Scott Bonner. “He has a tremendous attitude and work ethic, and we believe this will continue into his professional hockey career, where he will be a great representative of our team”

Now if the Giants are in fact without Martinook for the coming season, they will also more than likely be without Gallagher, who is expected to start the season in Montreal or their AHL affiliate in Hamilton. This is not lost on the team, and while Scott Bonner realizes that it’s 81 goals missing from the lineup, he insists that “we saw several returnees in training camp who are ready to step up and take their game to the next level. While it would be difficult for anyone to fill Gallagher or Martinook’s shoes, we have confidence that there is more than enough skill here to keep up offensively.”

If Martinook winds up with the AHL’s Portland Pirates, he is still eligible to play in the Giants pre-season games and even a couple of regular season games, before the Pirates training camp begins on September 28th.