Giants Squeeze Out A Victory Over Prince George 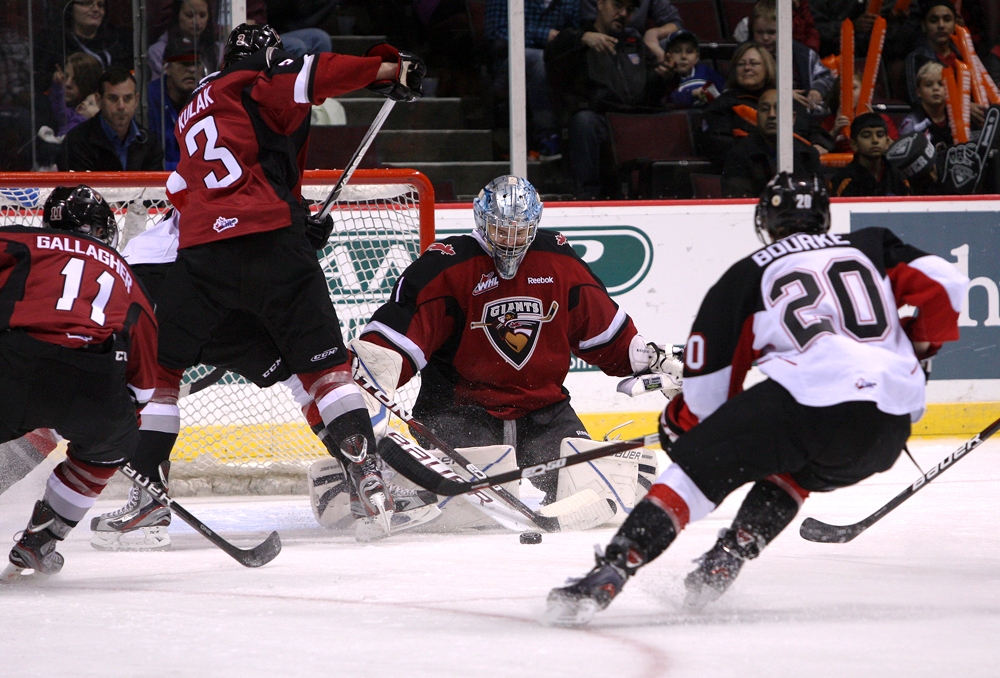 The Vancouver Giants rallied from a 3-1 deficit in the third period to defeat the Prince George Cougars 4-3 in a shootout Sunday night at the Pacific Coliseum, picking up their 13th win of the season. With the victory the Giants move into 1st place in the BC division, one point up on the Kamloops Blazers. Vancouver has now won 4 straight games overall and 6 straight on home ice.

The Giants opened the scoring in the first period as Marek Tvrdon potted his 11th goal of the season to give the home side a 1-0 lead through 20 minutes of play. Shots were 10-8 in favour of Vancouver.

With David Musil in the penalty box to start the third period, the Cougars would capitalize as Spencer Asuchak completed a nice passing play 57 seconds into the frame to put the Cougars up 2-1. 1:10 later Chase Witala’s wrister fooled Adam Morrison and Prince George took a 3-1 lead. The Giants would cut into the lead just past the midway point of the period as James Henry converted a nice feed from David Musil for his 5th goal of the season on the power play to make it a 3-2 game. Then, with Morrison on the bench for an extra attacker, Brendan Gallagher banged home a rebound for his 18th goal of the season and more importantly tie the game at 3-3.

Overtime was needed, but it would solve nothing, so on to a shootout they went. James Henry scored for the Giants, while Adam Morrison stopped all 3 Prince George shooters to give the Giants a 4-3 victory. Morrison finished with 26 saves on the night. With the win the Giants move into 1st place in the BC division.

The Giants now have four days off before playing three games in three nights, beginning Friday November 18 vs. the Victoria Cougars at 7:30 pm at the Pacific Coliseum. The pregame show begins at 7:00 pm on AM 650.