Giants Rally to Knock Off Lethbrdige 4-3 in a Shootout 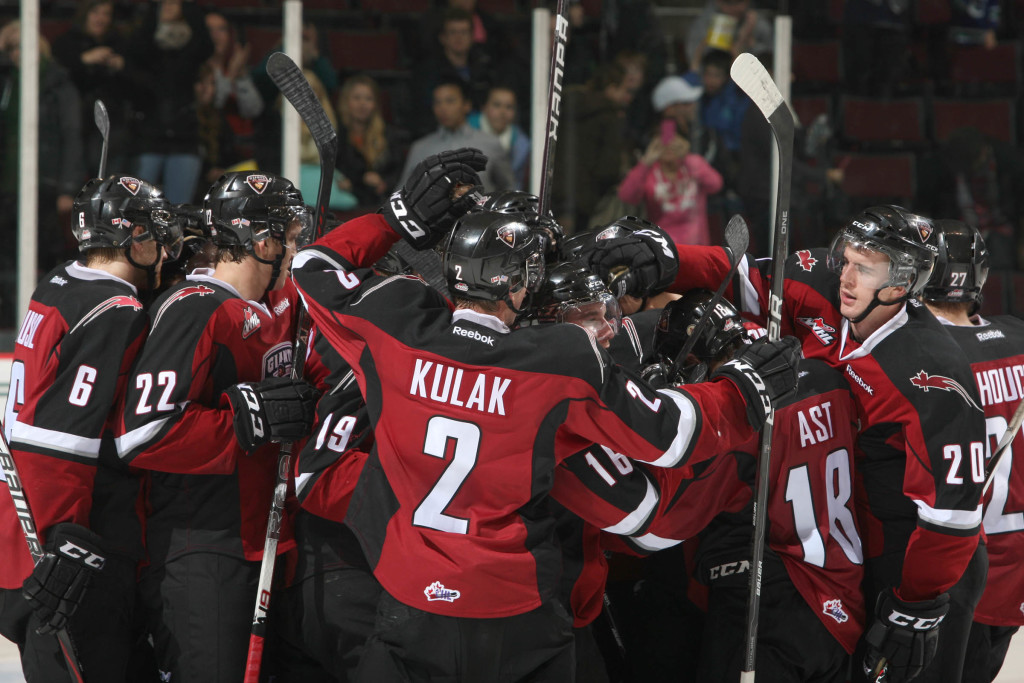 LETHBRIDGE, AB – In a game with several storylines, the Vancouver Giants tied it late and Nathan Burns scored the shootout winner in a 4-3 victory over the Hurricanes Tuesday night in Lethbridge.

This was Vancouver’s first road win of the season (in 5 tries) and that was only one of several storylines that developed throughout the game: Liam Liston picked up his first win of the season/in a Giants uniform, in this his 7th try, and it came against his former team, against the goalie (Ty Rimmer) who displaced him in Lethbridge.

Additionally, Carter Popoff scored his first goal in the WHL, Marek Tvrdon extended his points streak to 9 games, Nathan Burns snapped a 6 game pointless drought, and the Giants went to overtime for the very first time this season. Also noteworthy, Kale Kessy was in Lethbridge for the first time since his hit to the head of Ryan Pilon that led to his 12 game suspension. Despite the build-up in anticipation of what might happen, Kessy stayed cool and composed and nobody challenged him to drop the gloves.

The Giants opened the scoring when Nathan Burns pounced on a Tvrdon rebound at 4:36. But the Hurricanes equalized at 13:55 when Graham Hood set up Russell Maxwell on a 2 on 1.  It was 1-1 after 20.

The second period saw roles reversed. The Hurricanes took their first lead of the game when Daniel Johnston pounced on a loose puck in the slot to beat Liston. But 10 minutes later, the Giants got their own lucky break on a broken play, and Carter Popoff was the beneficiary, ‘popping’ his first ever WHL goal. It was 2-2 headed to the 3rd.

In the final frame, Axel Blomqvist was stopped by Liston on a breakaway only to get his revenge shortly thereafter (for his first WHL goal as well) and give Lethbridge the lead back at 4:46.

That lead looked like it would hold up till the end, but in the last minute, with the goalie pulled for the extra attacker, Dalton Sward tipped in a Vannieuwenhuizen one-timer from the right point to tie the game with just 50 seconds left.

The Giants took a late penalty that carried over into overtime, but they were able to kill it off, and the extra 5 minutes passed without a shot on goal either way.

In the shootout, the goaltenders were perfect on the first 3 shots both ways, but Liston was able to stop the Hurricane’s 4th shooter, setting up the heroics for Nathan Burns. Burns made a nice head fake and went top shelf on the backhand for maybe the biggest goal in the Giants season so far.

Neither team was able to convert with the man advantage. The Giants finished 0 for 4, snapping their 4-game streak of having a power play goal in each. But with Lethbridge going 0 for 5 on the power play, the Giants now extend their penalty kill streak to a perfect 13 for 13 over the last 3 games.

The Giants also outshot the Canes 36-29 (37-29 with the shootout winner), marking the 11th time in 14 games that they have outshot the opposition.

The win moves Vancouver to 4-10-0-0 on the season while Lethbridge suffers their first shootout loss and now drops to 8-7-1-1.

The Giants continue the road trip Thursday in Medicine Hat vs the Tigers, game 3 of 5 on this trip, as Kale Kessy returns to his home of 4 years. Face-off is 7pm in Medicine Hat, 6pm Pacific Time, and the game can be heard in Vancouver on TEAM 1410 starting with the pre-game show at 5:30pm.