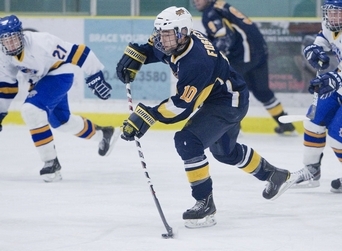 Giants 1st round pick in 2011, Thomas Foster (pictured above) and his St. Albert Source For Sports Raiders lost in the semi-final 3-2 to the eventual champions Russia Severstal/Locomotiv. The Raiders finished the tournament 5-1 and Foster had 5 goals, 1 assists, and 6 points in the 6 games. He was named game MVP in the Raiders 2-1 win over the Saskatoon Contacts, scoring both Raiders goals. 2011 2nd round pick Jake Kohlhauser played 2 games with St. Albert as a call up. The blueliner finished the event with 2 assists. Normally he plays with the St. Albert Minor Midget team.

Greater Vancouver Canadians teammates and defensemen, 2011 3rd round pick Shaun Dosanjh and Arvin Atwal, who was acquired from Prince Albert in October, finished the tournament 0-3-1. Dosanjh was scoreless in 4 games, while Atwal had 1 goal and 2 assists in the 4 games.

Listed defenseman Tyler Morrison and his Sherwood Park J. Ennis Kings finished the event 0-3-1. Morrison had 1 assist in the 4 games and was named game MVP in the Kings 3-1 loss to the UFA Bisons, who went on to lose in the Championship final. Morrison played 2 games in mid-December with the Giants.

Prince George native Jake LeBrun, who was listed by the Giants in the fall of 2011 had 3 goals and 2 assists in 4 games with the Cariboo Cougars. The Cougars finished the tournament 2-2 and out of the playoffs.