Giants Drop a Tight One to Kelowna in Preseason Opener 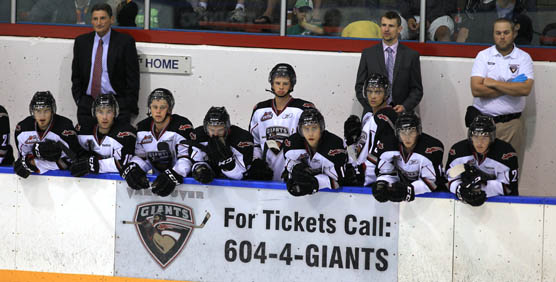 VANCOUVER, BC – The Vancouver Giants opened up their 2012/13 pre-season schedule on home ice at their practice facility (Ladner Leisure Centre) vs the Kelowna Rockets on Friday night.

It was a wild game with several twists and turns. Just when it looked like the Giants would cruise to victory, Kelowna got a key goal late in the 2nd and rallied in the 3rd to beat Vancouver by a 4-3 final.

The 1st period was a little bit scrambly, as both teams took some time to get comfortable. There was a lot of neutral zone play and perimeter shots on the goaltenders (Liam Liston for Vancouver, Jordan Cooke for Kelowna).

Things opened up a little bit in the second half of the period and Cain Franson opened the scoring for Vancouver on a snap shot high blocker from the top of the right circle. The Giants went into the locker room up 1-0, although they were outshot 15-14. Liam Liston looked really solid as he found a groove early and stuck with it throughout.

The 2nd period started with a bang; 3 quick goals would set the pace and open things up. Carter Popoff was able to sneak a shot through traffic on Cooke, low stick side at 1:37 to extend the Giants lead to 2-0. Just over a minute later though, Cole Linaker tipped in a long point shot from Stewart Coyle to get the Rockets on the board and make it 2-1. But the Giants responded quickly themselves exactly 3 minutes after that. Dalton Sward and Cain Franson (who had great chemistry all night) hooked up for one of the prettiest goals of the night, as Sward, while skating down the right wing, was able to feather a perfect pass in front to Franson; Franson showed great patience to outwait Jordan Cooke on his forehand and deke to the backhand to slide it underneath him. Suddenly the Giants were back up by two, it was 3-1.

The goal seemed to spark the Giants as they generated most of the pressure and scoring chances for the remainder of the period. However the Rockets goaltender was able to find his game after that and wouldn’t relinquish another goal the rest of the game.

After Liam Liston finished his half a game with 22 saves over 23 shots, youngster Payton Lee replaced him the rest of the way, and things didn’t go as well for him. With the Giants seemingly in control in the late stages of the 2nd, Dalton Sward took a high-sticking penalty that resulted in a Rockets power play goal with just 29 seconds left. Defensive prospect Stewart Coyle, one of the standouts for Kelowna tonight (1 goal, 2 assists), was able to wrist one past Lee from the left circle, high glove, and suddenly it was just a one goal Giants lead going into the break.

Despite giving up that late goal, the Giants came out in the 3rd with purpose. They were able to create several chances, but couldn’t restore the 2 goal lead. Despite that, they seemed to lock it down defensively, until… approaching the halfway mark of the 3rd, after a seemingly innocent shot went wide, the puck bounced out into the slot for Tyson Bailie who leaned into a slap shot that caught Lee off-guard. And just like that, it was a tie hockey game, and Kelowna had a lot more life.

It took just over a minute later for the Rockets to make their move. And what a move it was by Delta-born Ryan Olsen (Winnipeg Jets draft pick). He went coast to coast from center, made a move around Blake Orban coming down the left wall, then cut into the slot; despite originally getting poke-checked by the defense, he stuck with the play, corralled the puck back onto his stick and quickly slipped the puck behind Lee before the netminder could react to the broken play. Now the Rockets had their first lead of the game at 4-3, and they wouldn’t look back.

The Giants pulled the goalie with a minute and a half left and applied some heavy pressure, but despite knocking on the door, they couldn’t break through, and the Rockets clung on for the 4-3 victory, despite being outshot by the Giants 14-6 in the 3rd and 40-35 overall in the game.

Payton Lee took the loss with 9 saves on 12 shots through half a game, while Jordan Cooke went the distance for Kelowna making 37 saves on 40 shots.

Vancouver finished 0 for 4 on the power play while Kelowna went 1 for 5 on theirs.

Next up, these two teams play a rematch at Prospera Place in Kelowna Saturday night at 7pm.