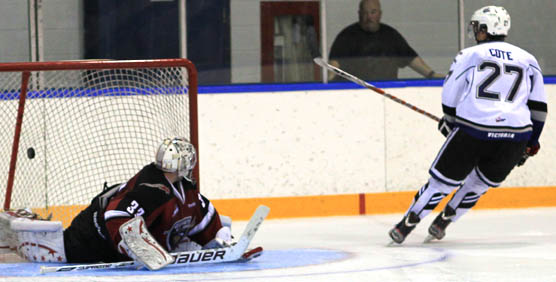 VANCOUVER, BC – The Vancouver Giants threw everything they had at the two Royals netminders, but it just wasn’t enough. Despite heavily outshooting the opposition in all 3 periods and 45-15 overall, and despite a 3-1 lead halfway through the game, the Royals were opportunistic when it mattered most and were able to claw back to come out with a 5-4 shootout victory.

Vancouver opened the scoring for the 4th time in 5 pre-season games when Jackson Houck poked in a rebound off a point shot at the 5:04 mark to give the Giants a 1-0 lead. Austin Carroll tied it up on a sharp-angled shot for Victoria at 12:53 after a great individual effort deep in the offensive zone. The Giants, however, would restore their lead just 26 seconds later when the puck squirted free to Marek Tvrdon in the high slot, and he wired a perfect wrist shot over the glove of Jared Rathjen to put Vancouver up 2-1 through 20 minutes of play.

6 minutes into the 2nd period, Brett Kulak opened up a two goal lead for Vancouver on a blast from the blue-line, even though it appeared like Taylor Makin tipped it in. Nevertheless, it was 3-1 up to the halfway mark of the second period. That’s when Victoria got some life on a pretty power play goal that was finished off by Ben Walker at the side of the net to cut the deficit to 3-2. This was followed by a goaltending change, as Coleman Vollrath replaced Jared Rathjen for the rest of the game. And he was outstanding for the Royals.

At 14:22 of that same period, Brandon Magee made a nifty deke in the neutral zone, and walked in across the blueline, snapping a shot through Liston from the top of the left circle and tying the game up at 3. And it was only three minutes after that when Victoria took their first lead of the game, and again it was on a power play, this time a scramble, finished off by Luke Harrison. The Giants appeared to tie it on a scramble of their own with just 3 seconds left in the period, but it was waved off with goaltender interference being cited as the reason. The Royals took a 4-3 lead into the locker room.

The third period saw the Giants continue to pour it on in waves, outshooting Victoria 16-3. But they were only able to beat Vollrath once, and it was on the power play, with Cain Franson finishing off a pretty passing play with Kieser and Kulak.

That goal at 8:36 tied the game at 4, and despite three straight power plays, the Giants were unable to get another one past Vollrath. The 17 year-old netminder was the story of the second half and was able to force the game to overtime.

The extra frame didn’t see a whole lot of chances either way, with the shots finishing just 2-1 in favour of Victoria.

The shootout, on the other hand, that was another story. After 5 straight missed attempts on both sides, Nathan Burns was able to give the Giants a lead, but Joe Hickets answered right back.

Then another miss both ways, then Thomas Foster and Mitch Deacon traded goals. Twice the Giants had a chance to win but couldn’t close it out. Then after a pair of misses on both sides, defenseman Brett Kulak was stopped on an incredible deke, and that paved the way for the Royals own defenseman, Brett Cote, to end it on a backhand deke past Liston to give the Royals the victory.

After 11 shooters on each side, it was over.

It was an overall tough night for the Giants starting netminder. Liam Liston gave up 4 goals on 15 shots.

18 year-old Jared Rathen was up and down for Victoria in making 17 saves on 20 shots. But as mentioned, Coleman Vollrath was the shining star in net for the Royals, turning aside 24 of 25 shots faced.

Vancouver finished the night 1 for 6 on the power play, while Victoria finished 2 for 3 with the man advantage.

This was the Giants first of four straight head-to-head meetings with the Royals. The two teams meet again tomorrow afternoon (2pm) in Victoria to wrap up the pre-season, and then they will play the same home and home series next Friday/Saturday to open up the regular season.