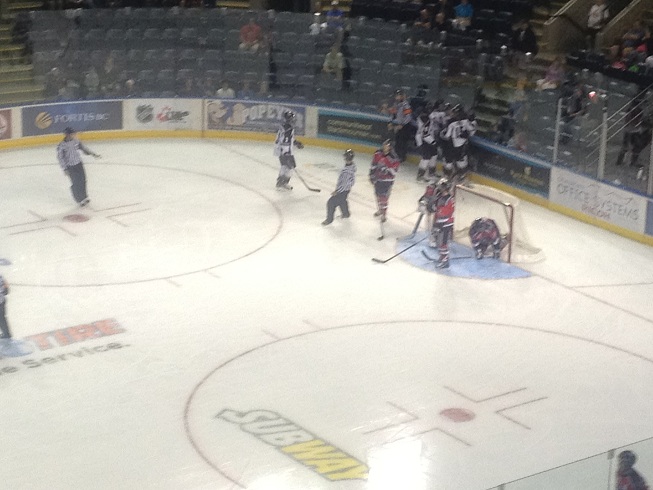 VANCOUVER, BC – After not a whole lot of emotion in the pre-season opener for both teams last night in Ladner, the rematch in Kelowna was intense right from the outset. Plenty of hits, post-whistle scrums, cheap shots, penalties, verbal jawing and of course a fight. But most importantly for the Giants, this time they came out on the right end of the scoreboard.

The 1st period started off a little bit shaky for Vancouver in their own zone, for both the defense and for goaltender Jackson Whistle, who was having a homecoming back in Kelowna. But after about the halfway mark, the Giants settled down and found their game, as passes started to connect again and scoring chances were created.

Despite outshooting the Rockets 13-5 in the opening frame, the Giants were unable to find the back of the net as Jordon Cooke, starting for the 2nd straight night in goal, made his period look easy in turning everything aside.

In fact, the Giants were a bit lucky not to come out trailing, as Kelowna scored the only goal; Tanner Moar banged in a loose puck from the slot, but Michael Urbaniak interfered with Whistle and took a penalty, and so the goal was disallowed. The first period finished scoreless.

In the 2nd, both teams ramped it up again physically, a carry-over from a tight game last night. This included some fista-cuffs between Carter Popoff of the Giants and Riley Stadel of the Rockets. Both guys landed some blows, but neither were hurt. However the referee decided to give them both a game misconduct.

The players were clearly developing a hate-on for each other quickly, even though it’s just the 2nd game of the preseason.

Just before the midway mark of the 2nd, Dalton Sward broke the ice. He made a beautiful deke around the defense while coming down the right wing, and then a nifty deke around the goaltender Cooke to deposit the puck on the backhand blocker side.

Shortly thereafter, the Giants changed their goaltender, as Tyler Fuhr came in relief of Jackson Whistle, who finished a perfect 11 for 11 with the disallowed goal. Fuhr looked steady in the last 10 minutes of the 2nd, and the Giants would carry their lead into the 3rd.

The Rockets started the 3rd frame on the power play with Brett Kulak still in the box, and just as the Giants were about to kill it off, Kelowna finished off some nice passing with a perfect shot from the slot by rookie Rourke Chartier (1st round pick last year) to tie the game at 1 with just a second left on the power play.

The Rockets gained some life with the equalizer and played some of their best hockey the rest of the way, outshooting the Giants 9-6 in the 3rd. Just past the halfway mark of the final frame, Colton Heffley finished off a pretty 3-way passing play with Madison Bowey and Tyson Baillie to put the Rockets up 2-1.

Kelowna carried momentum from here and just about got the insurance marker, but after 2 terrific stops by Fuhr on a 2 on 1, the Giants came back the other way, and just seconds later, Reid Zalitach snuck in a slap shot from a sharp angle in the right corner, and the Giants had tied it at 2 with 3:35 left. The 3rd period clock ran down rather uneventfully and the 2 teams went to overtime.

The 4 on 4 session saw a couple of close calls on both ends, but Tyler Fuhr and Jordan Cooke were both solid between the pipes, as Vancouver outshot Kelowna 6-3, but to no avail. A shootout was needed.

In the shootout, Kelowna elected to go first. Tyson Baillie was stopped, then Cain Franson went blocker side in. Justin Kirkland tied it up for Kelowna, then Brett Kulak was turned aside. Jesse Lees was stopped as well for Kelowna, paving the way for Jackson Houck to end it with a nifty backhand deke to give the Giants the 3-2 shootout victory.

Tyler Fuhr, despite giving up the only 2 goals (on 18 shots), was more busy and very solid in net for Vancouver, while Jackson Whistle, although fighting the puck a few times, was able to hold the fort down and should get some confidence with a perfect half game.

For the second straight night, Vancouver failed to capitalize on the power play finishing the game 0 for 3. With their late Power Play goal, Kelowna finished the game 1 for 4.

The final shots favoured Vancouver 38-29. Jordon Cooke made 36 saves in the loss for Kelowna.

Next up for the Giants, a trip to Kamloops on Wednesday to take on the Blazers at 7pm.