Giants Clinch Home Ice In Opening Round With Overtime Win 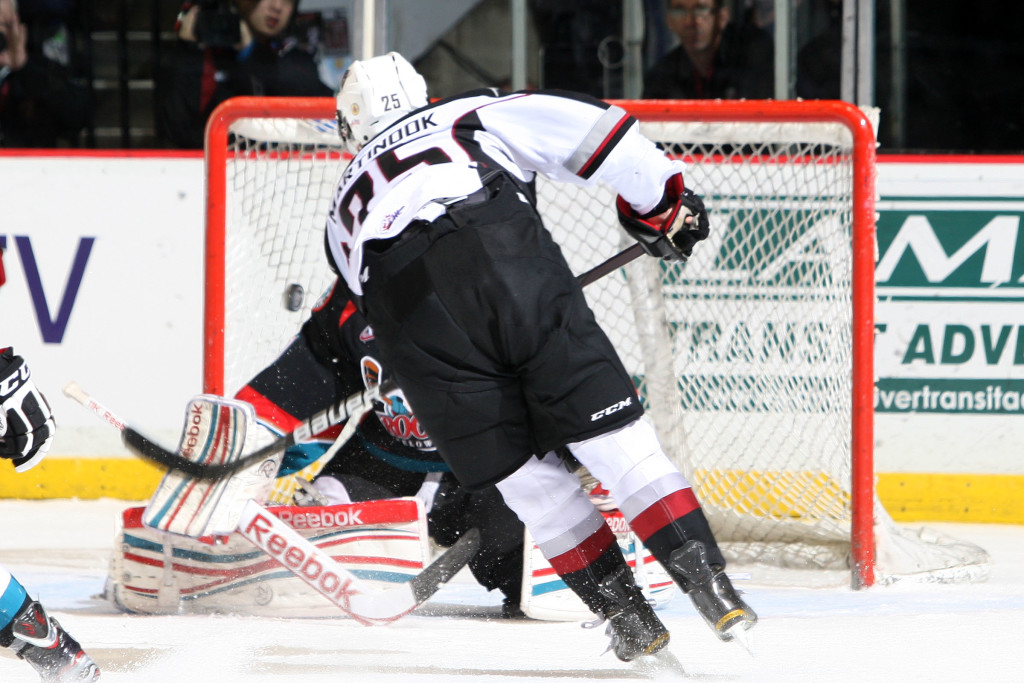 The Vancouver Giants clinch home ice advantage in the opening round of the 2012 WHL playoffs with a 5-4 overtime victory over the Kelowna Rockets Friday night at the Pacific Coliseum. Jordan Martinook recorded a hat trick, including the overtime winner for a second straight game as the Giants earned their 40th win of the season.

Kelowna’s Brett Bulmer opened the scoring 1:19 into the first period of play, but the Giants would respond 1:24 later on the 27th goal of the season from Cain Franson. 1-1 is how things would stand through 20 minutes.

The Giants came out flying with a flurry of chances in the second period, but were unable to find the back of the net. That would not be the case for the Rockets, who put two more up on the board courtesy of Tyson Ballie and Zach Franko on the power play to lead 3-1 after 40 minutes of play.

Vancouver didn’t waste anytime cutting into the lead in the third period as Jordan Martinook scored his 38th goal of the year 3:08 into the frame to make it a 3-2 Kelowna lead. The Giants continued to press, Neil Manning’s point shot went off the back boards, off the stick of Riley Kieser, and eventually off the thigh of Brendan Gallagher and in to the net to tie the game at 3-3. It was Gallagher’s 41st goal of the season. The Rockets would get it back though, as Damon Severson ripped home his 7th goal of the year on a nice individual effort to put the visitors up 4-3. However, Kelowna took back to back penalties to give the Giants a 5-on-3 late and just as the first penalty expired, Martinook knocked home his 2nd of the night to even the score at 4-4, sending the game to overtime.

It was the Rockets league leading 20th time playing overtime this season, but it wouldn’t go there way as Martinook was sent in all alone on a great feed from Marek Tvrdon and made no mistake, scoring his second overtime winner in as many games, picking up the hat trick and his 40th goal of the year and more importantly giving the Giants a 5-4 overtime victory. It is the 6th time in franchise history the Giants have won at least 40 games in a season.

With the victory and a 4-3 Spokane loss to Seattle, the Giants officially clinch home ice advantage in the first round of the 2012 WHL playoffs against the Chiefs.

The Giants will wrap up the regular season Saturday night in Kelowna. Puck drop is 7:05 pm. The pregame show begins at 6:35 pm on AM 650.