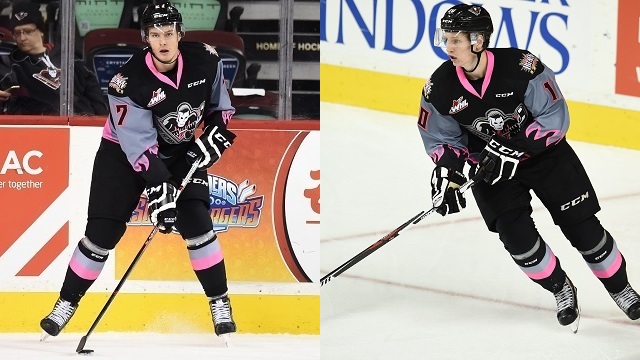 “In acquiring Ben and Chase, we’ve added a couple of NHL drafted players to our roster,” said Giants Executive Vice President and General Manager Scott Bonner. “Both of them have had some good playoff experience in our league, and we expect that they’ll be a great fit with our club. We would also like to wish Jackson, Jakob and Cody all the best with Calgary and thank them for their time with our organization.”

Thomas, a 19-year-old blue liner, was selected in the fourth round of the 2014 NHL Draft by the Tampa Bay Lightning at 119th overall. Hailing from Calgary, Thomas has three assists in 14 games this season to go along with 10 penalty minutes. Last year, Thomas picked up 31 points in 60 regular season games with the Hitmen. He has also posted 10 points in 24 career playoff games.

Houck has suited up in 268 games for the Giants over his WHL career. The North Vancouver native was a third round pick of the G-Men in the 2010 Bantam Draft, going 57th overall. Houck was also drafted by the Edmonton Oilers in the fourth round of the 2013 NHL Draft at 94th overall, although he is now a free agent after the club elected not to sign him. This year, Houck has scored four goals and five assists in 12 games.

Stukel was drafted by the Giants in the second round of the 2012 WHL Bantam Draft at 37th overall. The 18-year-old Surrey native had 16 points in 49 games in his rookie WHL season last year and has posted two goals and two assists in 12 games with Vancouver this year.

The Giants’ next game is tomorrow night at the Pacific Coliseum when the club hosts the Lethbridge Hurricanes. Face-off is scheduled for 7:00pm. Children under the age of 12 who come to the game dressed in their Halloween costume will get in free! For tickets, click here or call 604-4-GIANTS.