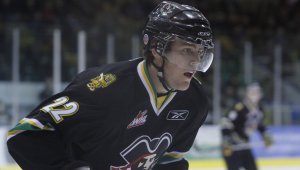 Austin Connor, a native of Beechy, Saskatchewan, is in his 2nd season in the WHL. This year the 6’4, 228 right-winger has zero points and 7 penalty minutes in 5 games. Last year he played in 59 games recording 8 goals, 5 assists, 13 points, and 104 penalty minutes. He will turn 19 on November 16.

Arvin Atwal is a native of North Delta, BC and currently plays for the Greater Vancouver Canadians of the BC Major Midget League. A 6’0, 192 defenseman has 1 assist and 22 penalty minutes in 8 games with the Canadians this season.

“We needed to upgrade our size and grit and standing 6’4, 228 lbs Austin instantly does that for us,” said Executive Vice-President and General Manager Scott Bonner. “This deal helps us change our identity to a tougher, more physical team to play against. When it comes to Arwin, he is a player our scouts have had their eye on for a long time. He currently attends the South Delta Hockey Academy and will be an important piece for our organization as we build towards a successful future.”

The club has also reassigned centre Greg Lamoureux to Okotoks of the Alberta Junior Hockey League. In 109 career games with the Giants, the 19 year old had 6 goals, 22 assists, and 28 points.