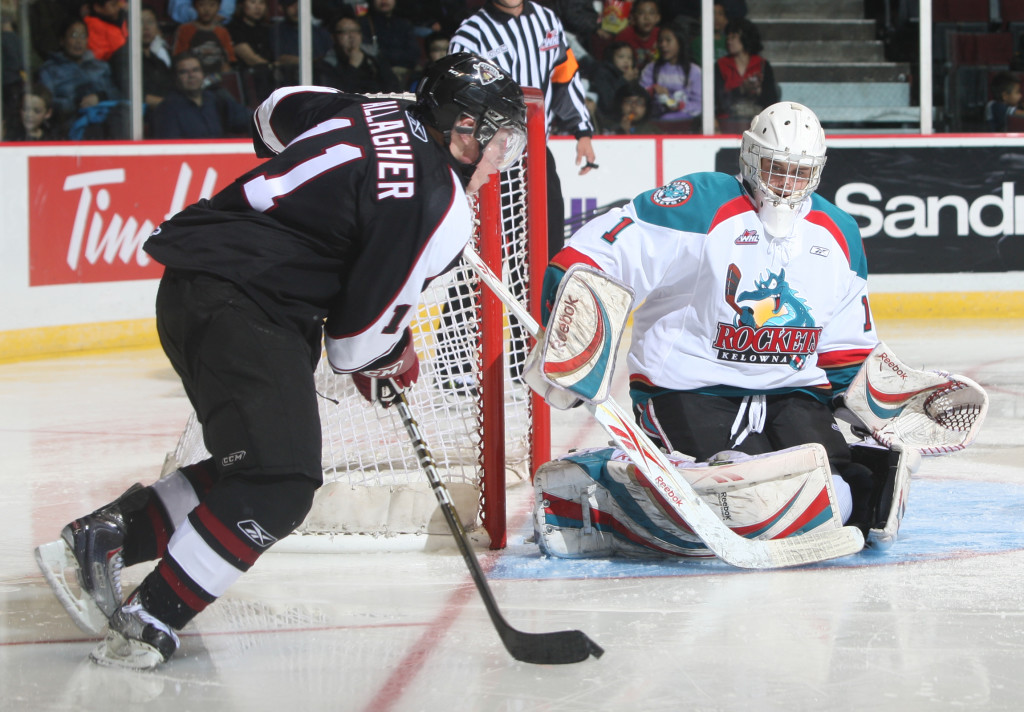 Over the first 5 weeks of the WHL season, the Vancouver Giants were the busiest team in the league, playing 18 games over 37 days. It resulted in 10 wins, 6 losses, 1 overtime loss, and 1 shootout loss. The month of November is much slower in comparison as the club has just 9 games, 6 of which are on home ice.

It all kicks off with a Giant week of games in which Vancouver plays 4 games in 7 days, beginning tomorrow with ‘Gordie Howe Night’ at the Pacific Coliseum. Gordie and his sons Mark and Marty will be on hand to see the Giants play host to the Kelowna Rockets. Vancouver is 2-0 vs. the Rockets this season, beating them 4-1 on home ice back on October 8th and rallying to win 7-5 October 20th in Kelowna. The Rockets come in playing some of their best hockey of the season, riding a two game winning streak. They feature the league’s reigning WHL Defenceman of the Year Tyson Barrie, potential first round pick in next year’s NHL draft Shane McColgan, and Mitch Callahan who has racked up 8 points in his last 2 games.

On Sunday the Everett Silvertips come to town. Currently 4th in the U.S. division, Sunday’s game with be the third in as many days for the tips who are struggling right now having lost 5 straight games. Vancouver is 1-1 vs. Everett this year. The Giants lost back on September 25th 5-2 at Comcast Arena and then beat them October 23rd at the Pacific Coliseum 3-1. Everett boasts recently signed Detroit Red Wings product, Landon Ferraro, and one of the best young blueliners in the league in Ryan Murray.

The third game of the week will see the Red Deer Rebels come to town. It will be the Rebels fifth of six games on a western road swing. The Giants will be looking for some revenge vs. one of the top teams in the Eastern Conference, having lost to them 5-2 back on October 29th. Red Deer features local Burnaby, B.C. product, Ryan Nugent-Hopkins, who could very well be the top pick in next year’s NHL draft and former Giant Andrej Kudrna.

Vancouver wraps up their busy week Thursday afternoon in Chilliwack when they take on the Bruins in an afternoon affair on Rememberance Day. These two division rivals have split their first two meetings of the season. The Giants won on opening night 9-4, while Chilliwack was a 6-3 winner back on October 16th. Vancouver will have to keep sniper Ryan Howse he check as he already has scored 6 goals vs. the Giants this year.