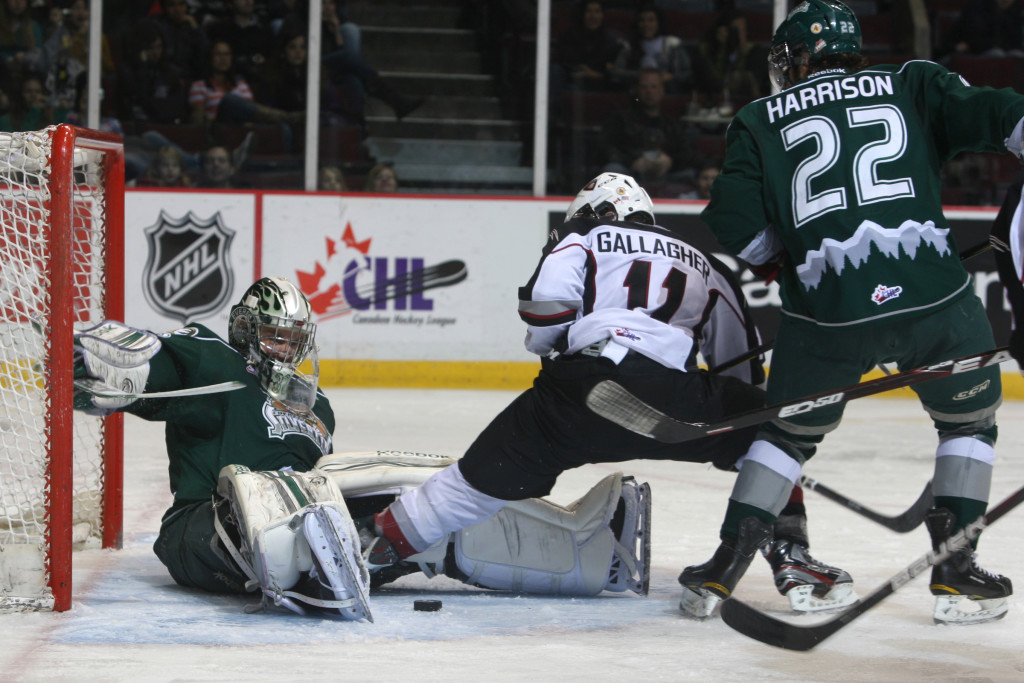 The Vancouver Giants picked up their 32nd victory of the season, defeating the Everett Silvertips 3-2 Friday night at the Pacific Coliseum. With the win the Giants improve to 4-0-0-0 this season vs. Everett, extending their winning streak to 9 games over the ‘Tips.

Everett came into town playing their best hockey of the season having won 4 of their previous 5 games, and they would open the scoring just past the midway point of the first period to lead 1-0. That lead lasted for a grant total of 64 seconds as Brendan Gallagher snapped home his 31st goal of the season to tie the game at 1-1. It was his 126th career regular season goal in a Giants uniform tieing him with Adam Courchaine for the franchise record for all-time goals scored. The Giants were not done there, Neil Manning potted his 6th of the year on the power play to give the home side a 2-1 victory after 20 minutes.

In the second period the Giants added to their lead; Cain Franson scored his 22nd goal of the season to put Vancouver up 3-1. They would outshoot the Silvertips 10-7 in the period and hold on to that 3-1 advantage through two periods of play.

The Giants a couple of chances in the third period, the best coming off the stick of Gallagher who rang it off the post, but when it was all said and done the only goal of the period was scored by the Silvertips with an extra attacker on and just 30.2 second remaining. That is as close as they would come, as the Giants held on to a 3-2 victory. The Giants finished 1-for-2 on the power play, while Everett went 0-for-5. Adam Morrison made 21 saves for the victory in net. There were 4 fights in this fiesty affair.

These two teams will do it again tomorrow night at Comcast Arena in Everett. Puck drop is at 7:05 pm. The pregame show begins at 6:30 pm on AM 650.