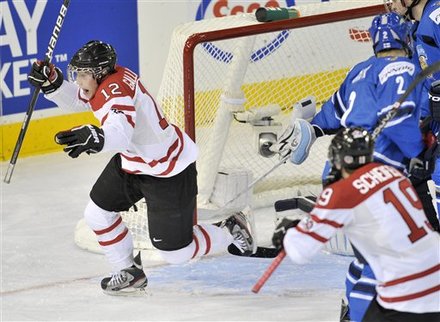 Brendan Gallagher had the game winning goal and an assist to help Canada to a convincing 8-1 victory over Finland on the opening day of the 2012 World Junior Championships in Edmonton. Brandon Wheat Kings sniper Mark Stone scored 3 goals, while Florida Panthers 1st round pick Jonathan Huberdeau chipped in with a goal and 4 helpers in the win.

Buoyed by the roars of the 16,647 at Rexall Place, the host country put in a complete performance with solid goaltending, smart defensive plays and a hard-charging attack. Niagara IceDogs defenceman Dougie Hamilton and forward Ryan Strome and Brett Connolly of the NHL’s Tampa Bay Lightning also scored for Canada.

Hay went with experience in net by giving Mark Visentin of the IceDogs the first start of the tournament. The Phoenix Coyotes prospect made 24 saves on 25 shots for the win. Visentin was Canada’s starting goaltender for the medal round of the 2011 tournament in Buffalo, N.Y. His big save on Teemu Pulkkinen with three minutes to go in the first period Monday preserved Canada’s 2-0 lead heading into the second.

“I’m happy with my performance tonight,” said Visentin. “Obviously there’s little things I’d like to fix up. I let (another) Phoenix draftee Ruuttu score. Good for him. He’s a good guy, but I only let him get one and one only.”

After giving up four goals on 17 shots in Canada’s final pre-tournament game against Sweden, there were questions whether Hay would go with Visentin or Scott Wedgewood of the Plymouth Whalers.

“It was always going to be Mark in my mind,” Hay said. “The experience of coming out in front of a crowd like this, he’s been exposed to that last year in Buffalo. When you have a veteran goalie coming back you really have to give him the opportunity to lead off the tournament.”

Canada has Tuesday off before facing David Musil and the Czech Republic on Wednesday and Denmark the following day. The hosts conclude Pool B play on Saturday versus the United States. The U.S. was to face Denmark in Monday’s later game in Edmonton.