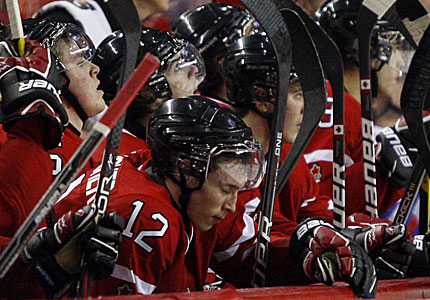 Brendan Gallagher and Team Canada’s comeback fell short as they lost to Russia 6-5 in the semi-finals of the 2012 World Junior Championships in Calgary Tuesday night. Trailing 6-1 with 12 minutes remaining in the 3rd period, Canada rallied for 4 straight goals to cut the lead to 1. Unfortunately, that would be it for the scoring as Russia held on to win 6-5. Gallagher finished with 1 goal and 2 assists in the game. It was the first loss ever for Don Hay at the World Junior Championships. He is 11-1 in his career as head coach of Canada. The red and white will now face Finland in the bronze medal game Thursday in Calgary at 12:30 pm PST. Sweden defeated Finland 3-2 in a shootout in the other semi-final. The gold medal game between Russia and Finland is set for Thursday night in Calgary at 5:00 pm PST.

On Wednesday in Calgary, David Musil and the Czech Republic will take on Marek Tvrdon and Slovakia in the 5/6 game. The puck drops at 6:00 pm PST at the Saddledome.

After losing out on a spot in the semi-finals due to a tough tiebreaker rule, Team Pacific defeated Team Quebec 5-4 in overtime to finish 5th at the 2012 World U-17 Hockey Challenge in Windsor, Ontario. Prince Albert’s Josh Morrissey scored the winner in overtime. Anthony Ast finished the tournament with 1 assist in 5 games, while Jackson Houck had 2 assists in 4 games. He missed 1 game with a lower body injury. The final will see Russia take on the USA tomorrow. Russia defeated Ontario 4-3 in overtime in one semi-final, while the USA needed a shootout to beat Sweden 2-1 in the other semi-final.