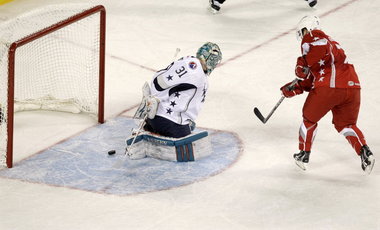 Kevin Connauton and Team West defeated Tyson Sexsmith (pictured above) and Team East 8-7 in a shootout Monday night at the AHL All-Star game in Atlantic City, New Jersey. Connatuon, who plays with the Chicago Wolves (Vancouver Canucks farm club), is in his second season in the AHL and leads all defencemen with 10 goals on the season. He beat Sexsmith for the tieing goal in the third period to send the game to a shootout. He also won the hardest shot at the skills competition the previous night with a shot of 99.4 miles per hour.

Sexsmith, now in his 3rd season of professional hockey, played the entire third period and shootout, allowing two goals on 11 shots. He stopped 2 of 4 shooters he faced in the shootout, but he wouldn’t be enough as he ended up taking the loss in net. Playing for the Worcester Sharks (San Jose Sharks farm club), Sexsmith is having his best seaon in pro, sporting a record of 9-8-5 with a 2.15 goals against average and a save percentage of .915%.