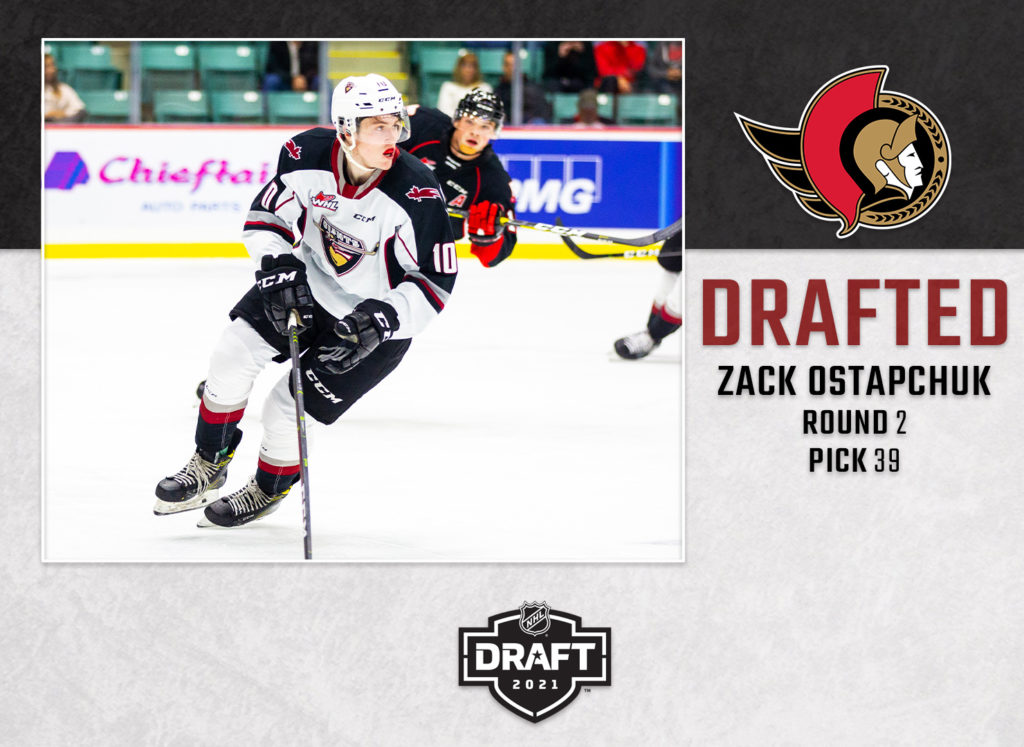 The Vancouver Giants are pleased to announce that 2003-born forward Zack Ostapchuk (St. Albert, AB) has been selected by the Ottawa Senators in the second round (39th overall) of the 2021 NHL Draft.

Ostapchuk, 18, checks in at 6’3” and 198-pounds and was originally selected by the G-Men with the 12th overall pick in the 2017 WHL Prospects Draft. Since then, the left-handed shooting forward has appeared in 72 career regular season games with the Vancouver Giants where he’s recorded 12 goals and 12 assists for 24 points. In 22 games last season, Ostapchuk posted seven goals and nine assists for 16 points. Three of his 12 goals were game-winners, and five of his goals were “first goals.” After the 2020-21 season, he was named the team’s Most Improved Player and the High School Scholastic Player of the Year.

With the 39th overall pick in the 2021 #NHLDraft, the #Sens select Zack Ostapchuk from the @WHLGiants! #GoSensGo pic.twitter.com/oR8u28vhJc

“Zack has worked hard and has overcome his share of adversity to get this point, and we couldn’t be happier for him and his family as they celebrate this great milestone today,” said Giants General Manager Barclay Parneta. “Zack’s size, speed, character and work-ethic are all going to play a big part in his eventual transition to pro hockey with the Ottawa Senators organization.”

Vancouver Giants head coach Michael Dyck adds, “Zack has established himself as a reliable two-way player, and a leader in our dressing room and our community. He plays an honest, hard, fast-style of game and we’re confident that the best is still yet to come from him. He’ll be a great fit with the Ottawa Senators.”

You can follow along with the entire 2021 NHL Draft here.

“Zack is a natural born leader. A very humble teammate who will put others before himself. He’s very gifted and has a massive amount of potential.” – Giants forward/2020 NHL Draftee Justin Sourdif.

“Zack’s potential as a pro hockey player was on full display this season. He proved that he can be a dominant player in the WHL in all aspects of the game, as well as growing into a leader off the ice. Whichever team picks Zack this weekend is getting a great player and an even better person.” – Giants over-age defenceman Connor Horning

“Zack is a 200-foot player with size and skill. He’s not just a great player also a great teammate and friend. Any organization is lucky to have him.” – Giants defenceman Tanner Brown.

“Zack is a player who really took a big step this season. He’s a big body player that showed some finish. He’s going to be a lot to handle next season.” – Kamloops Blazers broadcaster Jon Keen.

“Zack’s growth as a player really stood out the last season. His blend of size and skill makes him such a threat with the puck. He always seems to make something happen when he has the puck. I expect him to have a big year ahead.” – Prince George Cougars broadcaster Fraser Rodgers.