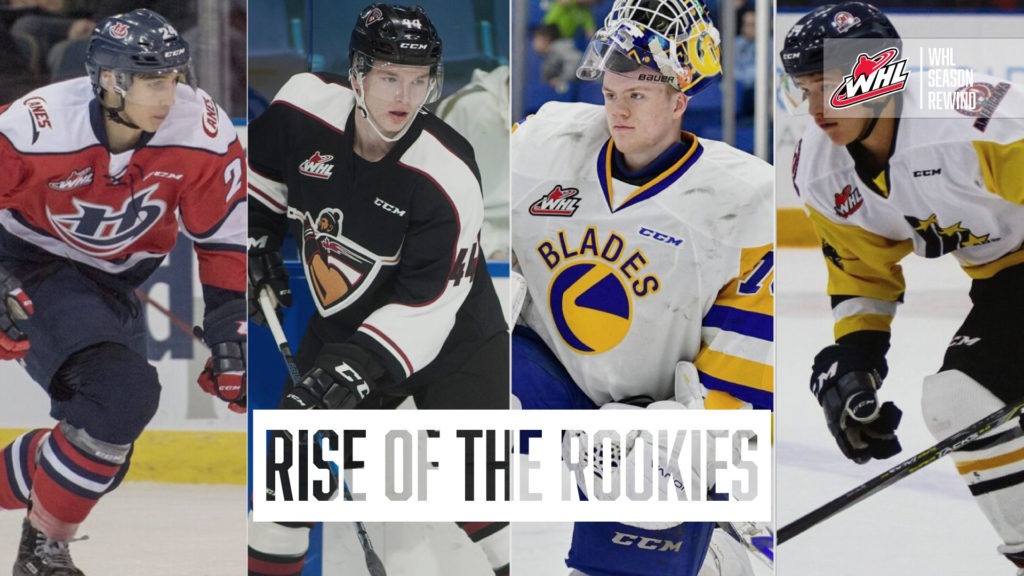 As the Western Hockey League’s 22-member clubs prepare for the 2018-19 WHL Regular Season, there’s renewed hopes of hoisting the Ed Chynoweth Cup at the conclusion of the 2019 WHL Playoffs. Before the season gets underway, it’s time to look back at the individual and team performances that made the 2017-18 season one to remember. Today, the WHL is taking a look back at the outstanding rookies, who have already put themselves on the radar of NHL teams ahead of the 2019 NHL Draft. This is the WHL Season Rewind.

Rookies are an important part of a team, regardless of what role they are in. Rebuilding teams will look to rookies to become their cornerstones, while contending teams look to fill depth with good players who are not at their prime yet. This season saw some exceptional young talent at all positions, including a handful of exceptional net minders.

There are many rookies that were difference makers for their respective clubs this year. To start, we will look at Dylan Cozens, who helped his team reach the Eastern Conference Championship.

Lethbridge Hurricanes forward Dylan Cozens put up 0.93 points per game this season, leading all rookies in points per game. He managed 53 points (22G-31A) in 57 games, adding 13 points (7G-6A) in 16 playoff appearances. Selected 19th overall by the Hurricanes, Cozens is a native of Whitehorse, Yukon. Yukon isn’t particularly known for its production of hockey players but Cozens is an exceptional talent. Cozens season was highlighted with back to back four-point efforts in January that saw him score four goals and four assists. He also attended the Hlinka Gretzky Cup where he posted five points (2G-3A) in five games, winning Gold with Team Canada. For his outstanding season, Cozens was awarded the Jim Piggott Memorial Trophy as WHL Rookie of the Year at the 2018 WHL Awards in Red Deer, Alta.

🌟 Flo gets a special star because he played really good again.#LETvsRD #YQL #CaneTrain

Peyton Krebs was selected first overall in the 2016 WHL Bantam Draft by the Kootenay ICE and played his first full season in the 2017-18 campaign. He posted six points (1G-5A) in as many games as a 15-year-old and only improved as a 16-year-old, recording 54 points (17G-37A) in 67 games. Leading all WHL rookies in scoring, Krebs also attended the Hlinka Gretzky Cup where he posted five points (2G-3A) in as many games. Krebs season started hot as he posted a four-point (1G-3A) show in his third game of the season. He added two three point games before Christmas, solidifying himself as one of the season’s best rookies.

Joining Krebs and Cozens at the Hlinka Gretzky Cup was Saskatoon Blades forward Kirby Dach. Dach was selected second overall by the Blades in the 2016 WHL Bantam Draft and led all rookies in assists this season. Due to injuries, Dach got to play 19 games as a fifteen-year-old where he posted 10 points (6G-4A). Being under 20 games Dach remained in rookie status for the 2017-18 season where he posted 46 points (7G-39A) in 52 games. At the Hlinka Gretzky Cup Dach posted seven points (2G-5A) in five games. Dach highlighted his season with a pair of four-point games, recording a goal and three assists in each of them. He also recorded two three-point nights, showcasing his potential for the 2018-19 WHL regular season.

Another rookie who had an excellent season was Tri-City Americans forward Sasha Mutala. The former sixth overall selection in the 2016 WHL Bantam Draft had 23 points (11G-15A) in 68 games. The end of the season was excellent for Mutala, who recorded nine points (3G-6A) over a five-game scoring streak. As the Americans advanced to the Western Conference Champion, Mutala added four points (1G-3A) in fourteen games. In the gold medal game of the Hlinka Gretzky Cup, Mutala scored twice, one off his stick, the other off his face. He added two assists for four points in five games.

Breaking into the WHL as a 16-year-old defencemen can be a daunting task, regardless of what club you’re on. For two of this year’s crop of rookie blue liners though, they made the jump look relatively simple and contributed to their team’s success immediately.

Bowen Byram was selected third overall in the 2016 WHL Bantam Draft by the Vancouver Giants. In his first full season he recorded 27 points (6G-21A) in 60 games and added seven points (3G-4A) in as many playoff appearances. The gifted defenceman also suited up for Canada at them Hlinka Gretzky Cup, putting up four points (1G-3A) in five games. Byram’s season was highlighted with a two goal and three point performance on February 2, 2018 against the Calgary Hitmen.

Rookie D-Man @BowenByram with a bullet from the blue line makes it 4-2 pic.twitter.com/ZiCHbnguIa

Matthew Robertson, selected seventh overall in the 2016 WHL Bantam Draft also attended the Hlinka Gretzky Cup, putting up four points (2G-2A) in five games from the blue line. The Edmonton Oil King had an impressive season, posting 24 points (7G-17A) in 67 games. Both Byram and Robertson are listed as top prospects heading into their first year of eligibility for the NHL Draft. Similar to Byram, Robertson highlighted his season with a two goal, three point performance against the Hitmen in his season finale.

An older rookie defenceman who made an impact was Spokane Chiefs Import defenceman Filip Kral. Kral, from Blansko, Czech. recorded 35 points (9G-26A) in 54 games this season. Unlike most rookies, Kral was eligible to be drafted into the NHL after his first season in the WHL and was selected by the Toronto Maple Leafs in the fifth round.

While a handful of new rookie defenceman will join the league this coming season, eyes will still be on the exceptional talent listed above as they become cornerstone’s for their respective franchises.

The WHL saw a handful of 2000-born netminders work themselves into starting positions, such as Ethan Anders (Red Deer Rebels), Duncan McGovern (Kootenay ICE), and Max Paddock (Regina Pats). The WHL also saw some rookies perform well in backup roles. Joel Hofer of the Swift Current Broncos recorded a 2.61 GAA and .914 SVS%, leading his team to a 8-3-1-1 record over his starts. Hofer was selected by the St. Louis Blues in the fourth round of the 2018 NHL Draft. 2001-born Dustin Wolf posted a 2.25 GAA with a .928 SVS%, leading his team to a 13-6-0-0 record.

In addition to back-up roles, two goaltenders found themselves in starting roles as 16-year-olds. 2002-born goaltender Taylor Gauthier suited up for 32 games with the Prince George Cougars, posting a 3.96 GAA and a .885 SVS%. However, it was Nolan Maier of the Saskatoon Blades who owned the spotlight.

Both Gauthier and Maier suited up for Team Canada in the Hlinka Gretzky Cup, backstopping Canada to a Gold Medal.

"This is huge, for our team confidence and my own confidence" – 16-year-old rookie netminder Nolan Maier chimes in after the Blades' 7th win in a row and going 10-0-0-0 in his last 10 starts. #RiseWithUs pic.twitter.com/iM7bTFGzX9

With the 2018-19 season around the corner and the 2019 NHL Draft shaping up to feature loads of WHL Talent, this year’s rookies know the importance of continuing their development and showcasing their skills. Many of the names on this list have already drawn interest ahead of the draft, making the spotlight on them brighter for the coming season.