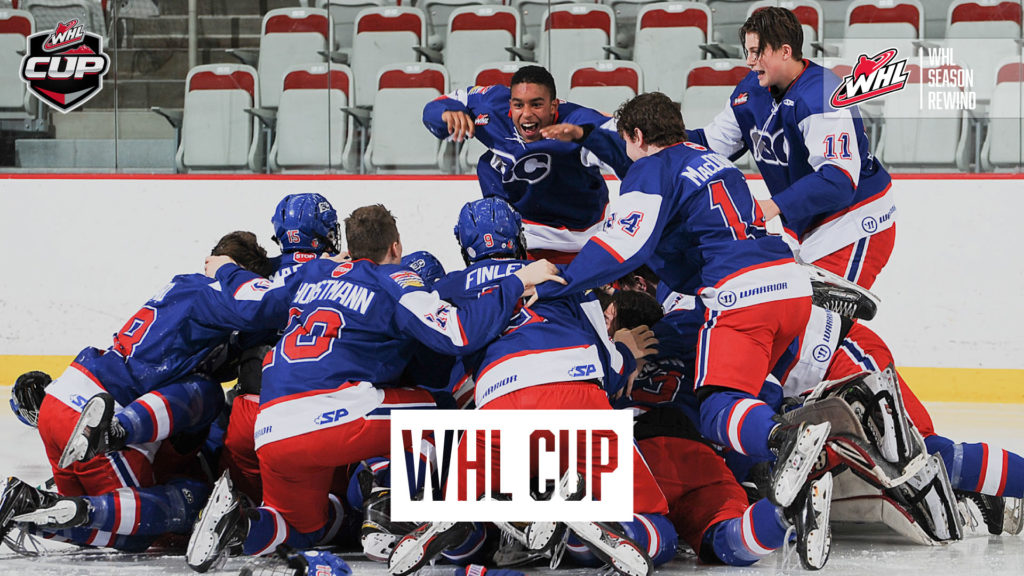 As the Western Hockey League’s 22-member clubs prepare for the 2018-19 WHL Regular Season, there’s renewed hopes of hoisting the Ed Chynoweth Cup at the conclusion of the 2019 WHL Playoffs. Before the season gets underway, it’s time to look back at the individual and team performances that made the 2017-18 season one to remember. Today, the WHL is taking a look back at the 2017 WHL Cup. This is the WHL Season Rewind.

For the seventh time since 2009, the four provinces from Western Canada convened for a week in October 2017 to showcase the best upcoming talent in the Western Hockey League.

A tournament that has featured last names like Patrick, Reilly, Point, and Barzal in the past, the WHL Cup has steadily become a means of providing that year’s WHL Bantam Draft class with an opportunity to participate in a high-level tournament among their peers and pave the way for future success in the game of hockey.

Hosted at the Markin MacPhail Center inside WinSport in Calgary, Alta., the provinces of Manitoba, Saskatchewan, Alberta, and British Columbia all met once again in hopes of lifting the championship trophy and claiming bragging rights over their age group for years to come.

Held on their home turf, Alberta had long symbolized this tournament with annual success. Besides a loss in 2012, Alberta had owned the top spot at the tournament, winning five times, including 2016’s triumph in overtime thanks to Spokane Chiefs forward Carter Chorney.

Standing in their way were British Columbia, led by Justin Sourdif (Vancouver Giants), the third overall selection from the 2017 WHL Bantam Draft, Jack Finley (Spokane Chiefs), and defenceman Aidan De La Gorgendiere (Saskatoon Blades). On the other side of Alberta, Saskatchewan had their eyes fixated on the gold as well with a trio of 2017 WHL Bantam Draft first round selections aiming to lead the charge in Kaden Kohle (Tri-City Americans), Josh Pillar (Kamloops Blazers), and Cohner Saleski (Prince Albert Raiders).

Team @sask_hockey had some puck fun ahead of warmups. +1 for the design skills. 👌 pic.twitter.com/cBiP2kUZs2

Day One of the tournament saw Alberta dominate Saskatchewan by an 8-3 score while Manitoba scored a surprise 3-2 shootout victory against B.C. Saskatchewan found their way into the win column on Day Two, winning 4-3 over Manitoba while Alberta moved to 2-0, dispatching of B.C. by a 6-2 score. The final day of round-robin play at the tournament saw Alberta maintain their perfect record with a tight 4-3 decision against Manitoba while B.C. silenced Saskatchewan by a 6-0 score.

In addition to dominating the round-robin as a team, Alberta dominated the scoring charts with Crnkovic’s seven points (1G-6A) leading the way, followed closely behind by Guhle’s six points (3G-3A) and a similar six points (3G-3A) from McClennon.

Semi-final Saturday at the WHL Cup produced similar matchups to the final day of round-robin play, with similar results. B.C. once against silenced Saskatchewan, this time by a 7-0 score. The top-seeded Alberta squad took care of business against Manitoba, earning a 7-1 victory to send the two provinces back to the gold medal game for another year.

For Alberta, Crnkovic had a pair of goals as part of a three-point game while Neighbours had a pair of assists. Garin Bjorklund (Medicine Hat Tigers) stopped 17 of 18 shots in the victory over Manitoba.

With both Saskatchewan and Manitoba battling for bronze Sunday, Manitoba came out with the 4-2 win, doubling up their neighbours to the west. While four different Manitoba players scored in the victory, Ty Thorpe (Brandon Wheat Kings) added an assist for the multi-point game. Dante Giannuzzi (Portland Winterhawks) kept things under control in net, stopping 21 of 23 shots.

The top billing of the day came in the second matchup of the week between Alberta and B.C., this time with gold on the line and the home province didn’t disappoint early on.

Goals from Guhle and McClennon had Alberta up 2-0 just past the midway point of the second period, but B.C. found a spark and began to rally. Late second period goals from Sourdif, Tyson Phare (Prince George Cougars) tied up the game and a goal from Ryan Watson (Medicine Hat Tigers) gave B.C. their first lead of the game 20 seconds into the third.

Put on the defensive, Alberta rallied in the final two minutes with a power-play goal from McClennon, his sixth goal of the tournament to force overtime.

It wouldn’t take long to find a champion though, with Ben King (Swift Current Broncos) striking 2:37 into the extra period to deliver the victory. Garand was sharp once again, stopping 24 of 27 shots to hold Alberta at bay.

PHOTOS: @BCHockey_Source win their second #WHLCup title with a 4-3 defeat of Alberta in overtime.

The tournament all-star roster was also named, with all four provinces represented. Alberta earned three tournament all-star honours with Crnkovic, McClennon, and Guhle picking up honours after finishing as the top three scorers in the tournament. Joining Crnkovic and McClennon on the forward all-star list was Sourdif from Team B.C. From Manitoba, Hunt was recognized for his play in helping Manitoba to the podium. In net, Bryan Thompson (Lethbridge Hurricanes) from Saskatchewan was named to the tournament all-star team in the goaltending position.

The celebrations weren’t over for all players either as King, the overtime hero, would go on to raise the Ed Chynoweth Cup with the Swift Current Broncos just a few months later while a long cast list of other players made their WHL debuts in advance of earning regular playing time during the 2018-19 season.

Though the teams have since departed, the first big step in the junior hockey journey has begun for 80 players, many of whom will come to be seen on a regular basis across the WHL for years to come.