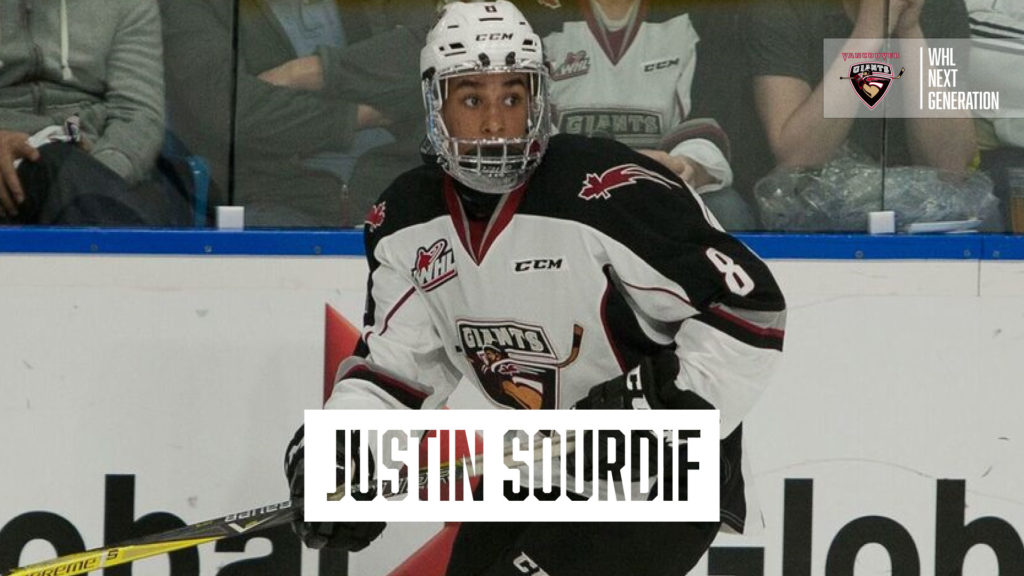 WHL Next Generation is a 23-part series highlighting a handful of the future stars of the Western Hockey League. From first-round bantam draft picks to later-blooming selections, get to know the names of players set to establish themselves as the newest crop of exciting talent to grace the WHL. From August 1 through August 31, get the inside scoop on the incoming rookie class of 2018-19.

The Vancouver Giants will enter this season with the majority of last season’s roster intact. One player they will hope is ready to step into the lineup and be an impact player is rookie forward Justin Sourdif. Sourdif, a product of Surrey, B.C., was selected third-overall in the 2017 WHL Bantam Draft by the Giants after an impressive 2016-17 Bantam season with Delta Hockey Academy of the Canadian Sport School Hockey League that saw him record 66 points (32G-34A) in 29 games.

“I don’t think I was expecting to go that high,” said Sourdif. “When I heard my name called I was really excited and it was special because it was my home town team. It will make it a lot easier to transition into the WHL, being close to home and having everyone who has been supporting me so close.”

This impressive season came after a 2015-16 campaign that saw him post 49 points (27G-22A) in 24 games with the Delta Hockey Academy Bantam Varsity team, leading the league in goals, assists and points. He also won the Canadian Sport School Bantam Varsity Hockey League Championship and was named the CSSBVHL Most Valuable Player. Even with the success Sourdif has found, being selected third overall was still an honour.

The Giants prospect had another impressive season in 2017-18, recording 73 points (23G-50A) in 35 games with the Valley West Hawks of the BC Hockey Major Midget League. Leading his team in points he also set the Hawks record for most points in a single season.

“I thought it went really well, I was very happy with how the season went,” stated Sourdif. “The coaches and my teammates were all really great to play with and I learned a lot. Our season got cut short in the first round [of playoffs], but overall I thought it was a good year.”

Congrats to @SourdifJustin who finishes 1st in league scoring as a rookie in the @BCHockey_MML league. 73 pts in 35 games. @WHLGiants pic.twitter.com/oSKzXipNIA

Adding five points (2G-3A) in three playoff games, Sourdif had an exceptional season as he led the BCMML in points and was named BCMML Player of the Year and was on the BCMML All-Star Team. Sourdif says he couldn’t have had the same individual success over the past three years without his teammates.

“I couldn’t have done it without my teammates,” said the BCMML Player of the Year. “Obviously I put a lot of work in on and off the ice, but my line mates always find me open with back door passes and they were always in the right spot for me to find them. I was happy to find the success I did but it was more important to me to help my team succeed and in doing so I found success.”

To add to his already impressive resume, the Surrey, BC product won gold with Team BC at the 2017 WHL Cup. He was a force in the tournament as well, tallying five points (4G-1A) in five games.

“The WHL Cup was a really fun experience and being able to represent BC and win gold for the province was exciting,” stated Sourdif. “I think the last time Team BC won gold at the tournament was in 2012 so to be able to bring it back to BC five year later was awesome.”

Congrats to Cam MacDonald and Justin Sourdif on bringing back gold to BC! pic.twitter.com/w47awmH2ku

With all the success Sourdif had found, it was time for him to try his hand in the WHL. The Giants called Sourdif up to play four games during the season. While he didn’t record his first WHL point, the 16-year-old is patient and was grateful for the experience.

“It was a really big change and very difficult jumping into the WHL,” explained Sourdif. “The guys are bigger, faster and a lot stronger. It showed me what I need to work on and what level I have to play at to be successful. I tried to make the most of my shifts and learn from the guys on the bench and in the locker room. Going into training camp this season I felt like a completely different player from last year.”

Heading into training camp, Sourdif knew he had to be bigger and stronger, and spent most of his summer and the previous year preparing for it.

“I have been training with Delta High Performance with Ian Gallagher and that has been going really well,” stated Sourdif. “They run really good sessions and I think I have gotten a lot stronger and faster working with them.”

After a remarkable year, Giants prospect Justin Sourdif looks to make a big impact for the Vancouver Giants moving forward. He reflects on his '17 Draft Day experience + more below.

With the summer behind him and training camp underway, Sourdif is excited to get the season rolling, and believes the Giants will have a really good year.

“I’m looking forward to this season, we are going to have a good team and I think we can make a deep playoff run,” said Sourdif. “I’m also excited to play in the [Pacific] Coliseum, being able to play in there is going to be really fun.”

The Vancouver Giants will play two games at the Pacific Coliseum during the 2018-19 season. Both games will take place in December, 2018; one of which will be the Teddy Bear Toss game! 🐻

“I remember going to watch games [at the Coliseum] as a kid. I think we have two games this season in the Coliseum, so I am really looking forward to those games.”

Sourdif and the Giants will begin their quest for the playoffs when they kickoff their pre-season against the Seattle Thunderbirds later this week. The game will be played at the Angel of the Winds Arena in Everett Wash. at 11:30 a.m. PDT on Friday August 31, 2018.

What is your favorite food?

If you could choose any super power what would it be?

What fad/trend do you wish would come back?

Who was your favorite hockey player to watch growing up?

Who is your favorite athlete outside of hockey?