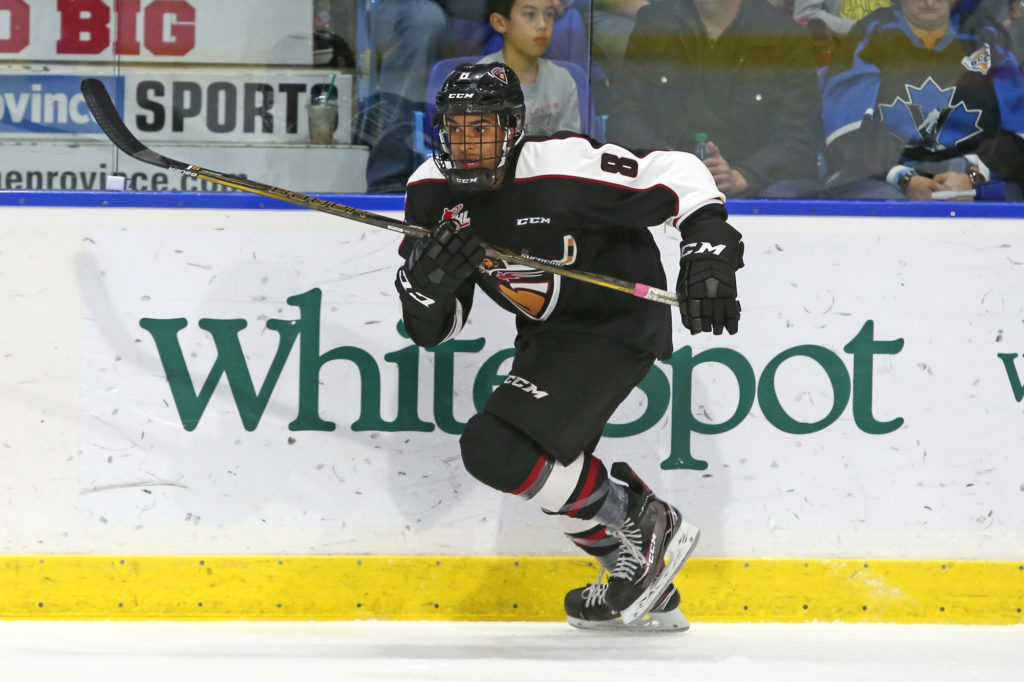 When the Vancouver Giants stepped up to the podium at the 2017 WHL Bantam Draft to select Surrey, B.C. native Justin Sourdif with the third overall pick, they couldn’t announce the pick fast enough. Immediately it felt like the right fit for both sides. The Giants management wanted to add a skilled forward to a compliment a young mix that already included defenceman Bowen Byram (selected third overall, 2016), goaltender Trent Miner (selected 20th overall, 2016) and rangy forward Tyler Popowich (selected third overall, 2015) while the 15-year-old Sourdif was ecstatic to join the WHL team that he grew up cheering for.

“I’ll never forget that day ever. It’s a one-in-a-lifetime moment,” said Sourdif earlier this week as he reflected on his WHL Bantam Draft Day experience. “I was nervous waking up that day. My parents made me go to school though and I remember riding on the bus to school as the draft was happening. When I saw my name beside the Vancouver Giants I got chills.”

Sourdif adds, “Being drafted by Vancouver was a dream come true. I wanted to be drafted by them from the get-go and I couldn’t think of any better organization to be a part of. Looking back on that day, it was a day I’ll never forget.”

May 4th, 2017 would be a memorable day for Sourdif along with eight other players who were selected that day by the Vancouver Giants. Little did Sourdif (and the Giants for that matter) know that it was only the beginning of what would end up being a truly memorable calendar year.

Less than three weeks after the draft, Sourdif became the first Giant from the 2017 draft class to sign a Standard WHL Player Agreement with the team. Since then, four others have joined him.

The next big decision for Sourdif was: Stay in the CSSHL with the Delta Academy? Or join the BC Major Midget League’s Valley West Hawks – A stacked team already that had championship aspirations. Sourdif chose the BC Major Midget League and ended up setting a new Valley West Hawks single season scoring record. That decision and the season itself proved anything but easy for the first-year forward.

“It was a struggle at first,” comments Sourdif on the transition to the BCMML. “But when we went to the Mach’s Tournament at Christmas things took a turn for the better for me. I ended up having a really good season and I couldn’t have it without my teammates.”

Sourdif finished his rookie season in the BCMML with 20 goals and 53 assists for 73 points in 35 games to lead the Valley West Hawks and the entire BCMML in scoring. He accomplished this while also appearing in four games as an under-ager with the Giants over the course of the regular season. Sourdif made his WHL debut with the Giants on November 18th, 2017 during a 6-1 home-ice victory against the Kelowna Rockets.

When the Valley West Hawks season ended abruptly during the BCMML playoffs, the silver-lining for Sourdif was that he’d join the Vancouver Giants for their playoff series with the Victoria Royals. He ended up playing in all seven of the games against the Victoria Royals and played a regular shift and made a positive impact at both ends of the ice.

“Playoff hockey in the WHL is different than the regular season. Getting to play in all seven games was a challenge, and probably the most difficult games I’ve played in my life, but I was ready for it and I’m glad I got that experience, especially heading into next year where I think we’re going to very far as a team,” said Sourdif.

A day removed from the end of the Vancouver Giants season ending, Sourdif was named a BCMML all-star and a day later was awarded the BMML Player of the Year honor.

Now everything has come full-circle and later this week on Thursday Justin Sourdif can take a much more relaxed approach to the 2018 WHL Bantam Draft.

Sourdif adds, “It’ll be a nerve-wracking day for the ’03 group, but I’ll be watching. I’m very interested in that stuff.”

Next season, Sourdif looks to join the Vancouver Giants full-time and he’ll be doing so with a lot of confidence and excitement based on the busy year and all of the successes and life lessons that came with it.

“Playoff hockey in the WHL is different than the regular season. Getting to play in all seven games was a challenge, and probably the most difficult games I’ve played in my life, but I was ready for it and I’m glad I got that experience.” – Justin Sourdif reflects on his experience in the WHL Playoffs.

November 18, 2017 – Makes his WHL debut with the Vanouver Giants at home against Kelowna.

Forward @justinsourdif makes his @TheWHL debut tonight for the G-Men when they battle the @Kelowna_Rockets tonight at the @LangleyEvents! Sourdif is currently fifth in BCMML scoring. He was selected third overall in the 2017 Draft.

March 23, 2018 – Makes his WHL playoff debut. He suited up in all seven playoff games for the G-Men.