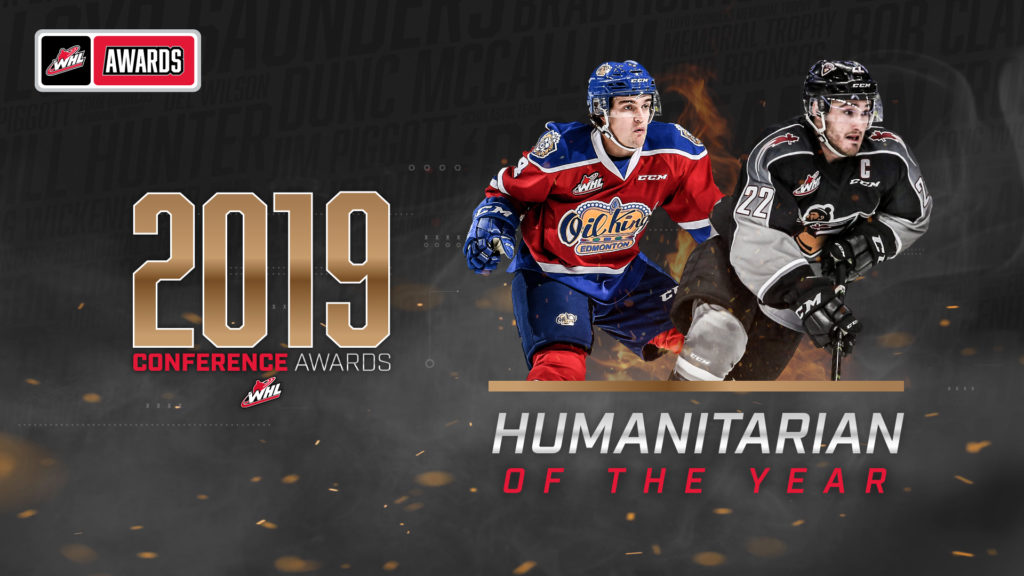 The Doug Wickenheiser Memorial Trophy will be presented at the 2019 WHL Awards on Wednesday, May 1, in Red Deer, Alta. It is awarded annually to the WHL’s Humanitarian of the Year and recognizes a player who has helped enhance the community he plays in.

In May 2001, the Humanitarian of the Year Trophy was named in honour of Doug Wickenheiser, a former Regina Pat, for his contributions on and off the ice.

Eastern Conference – Will Warm (Edmonton Oil Kings)
In his third WHL campaign, Will Warm dressed in just 33 regular season games as he dealt with a knee injury. With a burning desire to continue contributing as a member of the Edmonton Oil Kings, Warm decided to make his impact off the ice while recovering from his knee injury, spending time giving back to countless others through an initiative that was eventually coined Will Warms the Community.

The biggest benefactor of Warm’s efforts has been the Ronald McDonald House Charities (RMHC). After visiting Ronald McDonald House as part of a team appearance in October, Warm developed an affinity for it and arranged to have six tickets donated to RMHC children and their families for each Oil Kings home game. Regardless of the outcome of the game, he hosted a post-game meet-and-greet with the families and provided autographed items as a token of his appreciation.

Approaching the holiday season, Warm requested the Oil Kings visit Ronald McDonald House as a part of full team hospital visits. He led the players and was excited to introduce his RMHC friends to his teammates. Just prior to Christmas, Warm was invited to hit the switch with Santa, illuminating Ronald McDonald House in lights. That same night, he played games and ate cookies with children at Ronald McDonald House, missing out on part of a team dinner. Additionally, RMHC hosts weekly craft nights for two hours every Thursday – Warm attended eight times.

At a team visit to the Glenrose Rehabilitation Hospital prior to Christmas, Warm met a young boy named Carter who had spent a number of months in the hospital. After enduring three spinal surgeries, Carter was being discharged two weeks before Christmas. While the Oil Kings were on the road, Warm surprised Carter at his discharge party where they had treats and built Lego together. A few weeks later, Carter and his family attended an Oil Kings home game using Warm’s seats.

During another hospital visit, Warm met a young man named Peyton who has survived three brain surgeries and spent significant time at the Stollery Children’s Hospital. Peyton introduced Warm to an initiative called Peyton’s Project, which builds chairs using broken hockey sticks and donates all proceeds to the Stollery Children’s Hospital. Warm immediately went about collecting broken sticks from the Oil Kings and hand delivered them to Peyton’s workshop. Since then, Peyton has celebrated one year of being cancer free and attended an Oil Kings game with Warm’s help.

Following the Oil Kings’ annual Teddy Bear Toss game, Warm spent a morning packaging bears for delivery to local families and on another occasion, he spent personal time with an international Oil Kings fan from Scotland who was smitten by mascot Louie the Lion. In the wake of hearing that a family member of an Oil Kings staff was involved in a life-threatening accident, Warm organized a team trip to Canadian Blood Services.

Warm’s generosity knows no bounds. After recovering from his knee injury, he continued delivering Will Warms the Community.

Western Conference – Jared Dmytriw (Vancouver Giants)
From the moment he arrived in Vancouver, Jared Dmytriw has been an integral contributor to the on- and off-ice success of the Giants.

The native of Craven, Sask., took it upon himself to lead the Giants in all aspects of their operation. After the unveiling of the “Be A Giant” initiative this season, Dmytriw was the first player to volunteer his time to visit schools throughout the Lower Mainland to encourage local youth to be Giants in their schools, homes, communities, and for their own personal health. His kindness, compassion, easy-going demeanour and his genuine desire to be a positive role model made him an ideal spokesperson for the Giants.

In November, Dmytriw took it upon himself to organize and create the Vancouver Giants Movember team. In total, the team raised $2,620 towards men’s health initiatives, with $1,560 coming from the fundraising efforts of Dmytriw.

In February, Dmytriw took the lead as the Giants visited Fleetwood Arena in Surrey, B.C., to cheer on an 11-year-old Giants fan named Amelia. Dmytriw sparked the creation of a number of signs the Giants brought along to cheer Amelia on with. Following an extended stay after a road game in Kamloops, Dmytriw and the Giants arrived back in the Lower Mainland a few hours before Amelia’s game and attended with great enthusiasm.

The impact on Amelia was incredible. Selectively mute, Amelia has been attending Giants games and encouraging her favourite players with signs for years. Her connection with the Giants has helped her to overcome many challenges, and having Dmytriw and his Giants teammates visit her own hockey practice meant the world to her.

There is no task too big for Dmytriw. He has shown during his time with the Giants that he is selfless and sincere. His leadership on the ice is matched by his passion for the community off the ice.