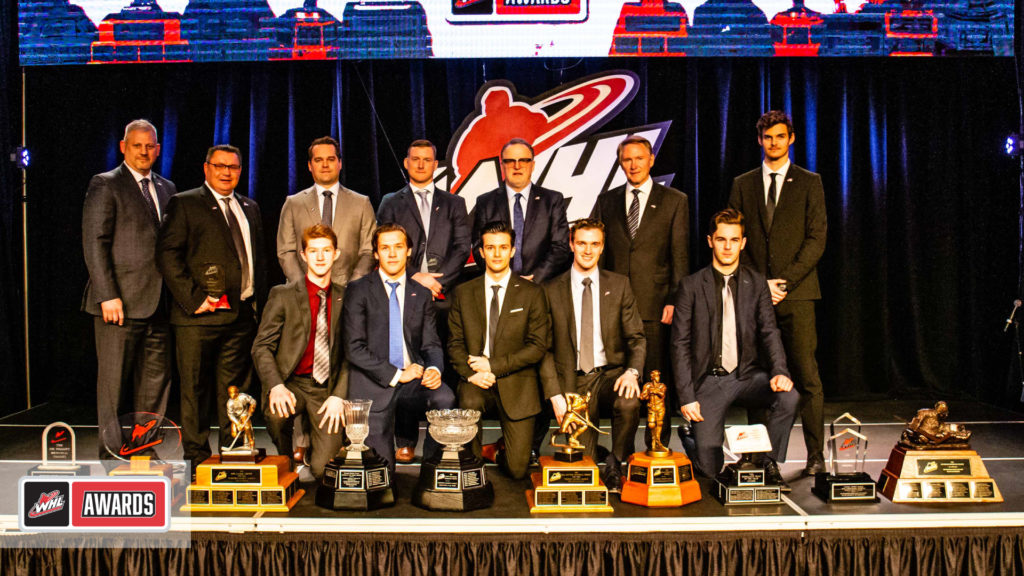 WHL Player of the Year – Four Broncos Memorial Trophy
WINNER: Joachim Blichfeld – Portland Winterhawks
The import forward from Frederikshavn, Denmark, returned to the WHL for his overage season in 2018-19 and had a season to remember. A prospect of the San Jose Sharks, Blichfeld registered career highs in all major offensive categories, including goals (53), assists (61) and points (114). The 6-foot-1, 188-pound forward claimed the Bob Clarke Trophy as the WHL’s Top Scorer with 114 points and his 53 goals were tied for first in the WHL as well. Blichfeld is the second Danish-born Winterhawk to win the WHL scoring title, following in the footsteps of Oliver Bjorkstrand (118 points, 2014-15).

WHL Goaltender of the Year – Del Wilson Memorial Trophy
WINNER: Ian Scott – Prince Albert Raiders
In his fourth season with the Raiders, the Toronto Maple Leafs prospect enjoyed a season of career bests in 2018-19. His 38 wins, 1.83 goals-against average, .932 save percentage, and eight shutouts were all personal bests for the Calgary, Alta. product. The 6-foot-3, 183-pound goaltender finished first in the WHL for shutouts while placing second in wins, GAA, and save percentage.

WHL Defenceman of the Year – Bill Hunter Memorial Trophy
WINNER: Ty Smith – Spokane Chiefs
After the New Jersey Devils made Smith the highest WHL player selected at the 2018 NHL Draft, the Lloydminster, Alta. product put forth a strong effort in his third full season with the Chiefs. Smith amassed 69 points (7G-62A) in 57 games, nearly matching his career-best total from the 2017-18 WHL Regular Season in 12 fewer games. At the 2018 WHL Awards, Smith was the recipient of the Daryl K. (Doc) Seaman Award as the WHL Scholastic Player of the Year.

WHL Scholastic Player of the Year – Daryl K. (Doc) Seaman Memorial Trophy
WINNER: Dustin Wolf – Everett Silvertips
The product of Tustin, Calif., put forth a strong season academically, maintaining a 100 percent average for the current academic year, as well as an overall average of 98.8 percent for his high school years. In Grade 12 courses, Wolf achieved perfect grades in English 12, Statistics, Economics, and American Government. In his second season in the WHL, Wolf enjoyed a career year, registering a record of 41-15-2-2 with a 1.69 goals-against average, .936 save percentage and seven shutouts in a career-high 61 appearances.

WHL Rookie of the Year – Jim Piggott Memorial Trophy
WINNER: Brayden Tracey – Moose Jaw Warriors
The 17-year-old Calgary, Alta. product made a strong impact in his first full season with the Warriors. In 66 games, Tracey recorded 81 points (36G-45A), leading all rookies and finished tied for 13th in WHL scoring. Selected in the first round, 21st overall, of the 2016 WHL Bantam Draft, the 6-foot-0, 174-pound Tracey has quickly caught the attention of NHL Central Scouting, ranked 21st among North American skaters in their final rankings ahead of the 2019 NHL Draft.

WHL Most Sportsmanlike Player of the Year – Brad Hornung Trophy
WINNER: Justin Almeida – Moose Jaw Warriors
The Pittsburgh Penguins prospect put together a near-immaculate season with the Warriors. Almeida’s 111 points (33G-78A) ranked third in the league while his 14 penalty minutes were the fewest incurred of any player in the top-15 scorers from the 2018-19 WHL Regular Season. The Kitimat, B.C. product recorded a career-high 78 assists, leading all players throughout the regular season. The Penguins selected Almeida in the fifth round, 129th overall, of the 2018 NHL Draft.

WHL Humanitarian of the Year – Doug Wickenheiser Memorial Trophy
WINNER: Will Warm – Edmonton Oil Kings
In his third WHL campaign, Will Warm dressed in just 33 regular season games as he dealt with a knee injury. With a burning desire to continue contributing as a member of the Edmonton Oil Kings, Warm decided to make his impact off the ice while recovering from his knee injury, spending time giving back to countless others through an initiative that was eventually coined Will Warms the Community.

The biggest benefactor of Warm’s efforts has been the Ronald McDonald House Charities (RMHC). After visiting Ronald McDonald House as part of a team appearance in October, Warm developed an affinity for it and arranged to have six tickets donated to RMHC children and their families for each Oil Kings home game. Regardless of the outcome of the game, he hosted a post-game meet-and-greet with the families and provided autographed items as a token of his appreciation.

Approaching the holiday season, Warm requested the Oil Kings visit Ronald McDonald House as a part of full team hospital visits. He led the players and was excited to introduce his RMHC friends to his teammates. Just prior to Christmas, Warm was invited to hit the switch with Santa, illuminating Ronald McDonald House in lights. That same night, he played games and ate cookies with children at Ronald McDonald House, missing out on part of a team dinner. Additionally, RMHC hosts weekly craft nights for two hours every Thursday – Warm attended eight times.

At a team visit to the Glenrose Rehabilitation Hospital prior to Christmas, Warm met a young boy named Carter who had spent a number of months in the hospital. After enduring three spinal surgeries, Carter was being discharged two weeks before Christmas. While the Oil Kings were on the road, Warm surprised Carter at his discharge party where they had treats and built Lego together. A few weeks later, Carter and his family attended an Oil Kings home game using Warm’s seats.

During another hospital visit, Warm met a young man named Peyton who has survived three brain surgeries and spent significant time at the Stollery Children’s Hospital. Peyton introduced Warm to an initiative called Peyton’s Project, which builds chairs using broken hockey sticks and donates all proceeds to the Stollery Children’s Hospital. Warm immediately went about collecting broken sticks from the Oil Kings and hand delivered them to Peyton’s workshop. Since then, Peyton has celebrated one year of being cancer free and attended an Oil Kings game with Warm’s help.

Following the Oil Kings’ annual Teddy Bear Toss game, Warm spent a morning packaging bears for delivery to local families and on another occasion, he spent personal time with an international Oil Kings fan from Scotland who was smitten by mascot Louie the Lion. In the wake of hearing that a family member of an Oil Kings staff was involved in a life-threatening accident, Warm organized a team trip to Canadian Blood Services.

Warm’s generosity knows no bounds. After recovering from his knee injury, he continued delivering Will Warms the Community

WHL Executive of the Year – Lloyd Saunders Memorial Trophy
WINNER: Curtis Hunt – Prince Albert Raiders
In his fourth season as a WHL General Manager, Curtis Hunt built a Prince Albert Raiders squad that cruised to a WHL-best record of 54-10-2-2, capturing the Scotty Munro Memorial Trophy as WHL Regular Season Champions for 2018-19. Over the course of the campaign, the 52-year-old native of North Battleford, Sask., executed a number of key transactions to bolster his roster, including the acquisition of impact forwards Dante Hannoun and Noah Gregor. Prior to 2018-19, Hunt built the Raiders through trade and the WHL Bantam Draft, acquiring the likes of Brett Leason, Brayden Pachal, Max Martin and Sergei Sapego, as well as drafting impact players such as Jakob Brook, Ozzy Wiesblatt, Aliaksei Protas, and Kaiden Guhle.

Strong communication and engagement has helped to spark further interest in the Silvertips and the WHL in the Everett area. With a robust data collection program, email has become an effective means of communication for the Silvertips to engage with fans and share news such as statistics, ticket promotions, and more.

The Club takes pride in being an innovator when it comes to game-night promotions and community involvement. Silvertips players visited 32 local schools to speak on anti-bullying, health and fitness, and the importance of staying in school. Players also made two trips to the Providence Regional Medical Centre – one to visit cancer patients and providers ahead of the Club’s “Pink the Rink Night,” and a second visit to deliver teddy bears to the Pavilion for Women & Children after the Silvertips successful teddy bear toss night.

In 2018-19, the Silvertips have helped to contribute nearly $130,000 towards local fundraisers and charitable organizations, including the Snohomish County Law Enforcement Memorial Fund and the Medic One Foundation. The Silvertips’ “Pink the Rink Night” raised $94,000 to help fund free mammograms and cancer care for women in Snohomish County.

The Portland Winterhawks education program excelled once again during the 2018-19 season. The Winterhawks organization fully complies with, supports and champions the WHL mandate that all players be encouraged and engaged with academic opportunities and success. Every Winterhawks player attends school. Following high school graduation, players take at least two post-secondary courses each season, and are encouraged to complete additional courses online. The overall grade-point average for all eight Winterhawks players in high school was 90 per cent, while another 16 Winterhawks completed a minimum of six post-secondary credits during the 2018-19 season. A key contributor to the Winterhawks’ academic success is Education Sue Johnson, who was a recipient of the WHL Distinguished Service Award for her outstanding contributions in 2018. Johnson has established a philosophy of nurturing, supporting and encouraging each player to reach their full potential, be it on the ice or in the classroom.

For the third consecutive season, Brett Iverson is the WHL’s Top Official. The product of Richmond, B.C., was recently named to the officiating team for the 2019 IIHF Men’s World Championship for the fourth consecutive season. Iverson has enjoyed a remarkable set of assignments, including skating at the 2018 Winter Olympics in South Korea, the gold medal game at the 2016 World Junior Championship, multiple CHL Top Prospects and CIBC Canada-Russia Series games, as well as multiple Memorial Cup games, including the final in 2015. In addition to his work in the WHL and on the international stage, Iverson is an active official in the American Hockey League.

For only the second time in franchise history, the Prince Albert Raiders claimed the Scotty Munro Memorial Trophy as WHL Regular Season Champions for the 2018-19 season. Their record of 54-10-2-2 (112 points) represents the second-highest point totals in franchise history and the fourth time the Club has surpassed the 50-win plateau. The Raiders’ 54 wins also represented the most wins by a WHL team in a 68-game season. The Raiders were guided by talent at all positions with forwards Brett Leason, Noah Gregor, Dante Hannoun, Parker Kelly, defencemen Brayden Pachal, and goaltender Ian Scott.

WHL Top Scorer – Bob Clarke Trophy
WINNER: Joachim Blichfeld – Portland Winterhawks
For the second time in five years, the Bob Clarke Trophy for the WHL’s Top Scorer belongs to a member of the Portland Winterhawks. The 20-year-old Blichfeld recorded a league-leading 53 goals and 114 points, becoming the first player in the WHL to reach the 50-goal and 100-point mark in the 2018-19 season. A product of Frederikshavn, Denmark, Blichfeld followed in the footsteps of Danish product Oliver Bjorkstrand, who won the award in the 2014-15 WHL Regular Season. Blichfeld was one of five WHL skaters to score record triple-digit points in 2018-19.

The 2019 Rogers #WHLChampionship Series will begin Friday, May 3 at 7 p.m. MT as the Prince Albert Raiders play host to the Vancouver Giants. Every game of the series will be available on WHL Live. Playoff packages are available here.