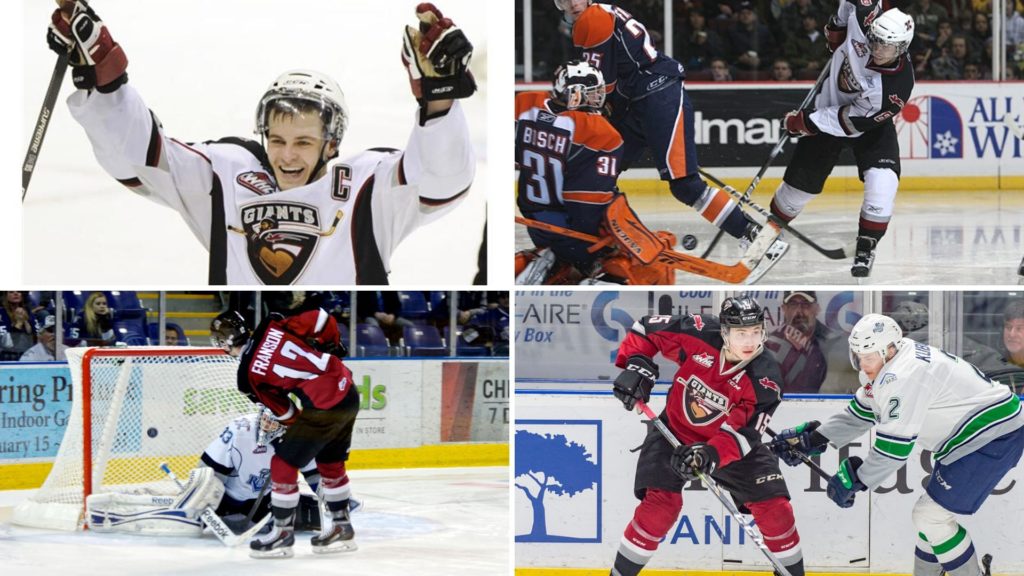 On Wednesday, April 22nd the Vancouver Giants will be participating in the WHL Bantam Draft for the 20th time in their franchise’s rich history. The Bantam Draft is wide regarded as the “lifeblood” of any WHL team and it’s no secret that strong drafting generally leads to strong results on the ice. Today we recap some of the notable selections that the Giants have made in Rounds 2 and 3.

In 2002 the the Vancouver Giants selected Wakaw, SK’s Shaun Vey with the 20th overall pick. Vey’s WHL career lasted 241 career regular season games, but only 41 of those came with the Giants. In 2004-05 Vey was traded to Tri-City along with Mike McDonald in exchange for Ryan Costanzo and Brett Festerling. Festerling would go on to captain the Vancouver Giants to their Memorial Cup championship in 2007. The trade worked well for Vey as well. He posted 73 points in 70 games with the Tri-City Americans during his over-age season.

The forward from Fort Saskatchewan, AB played 198 career games with the Vancouver Giants, and supplied strong depth during their league championship in 2006 and their Memorial Cup championship in 2007. The final 55 games of his WHL career were spent with the Regina Pats. In his three seasons with the Giants he scored 16 goals along with 40 assists for 56 points.

The product of Provost, AB suited up in 230 career regular season games with the Giants and added 65 playoff appearances, 22 of which came in his rookie season when the Giants won the Memorial Cup. He’s a former captain and a third round draft pick of the Calgary Flames from the 2008 NHL Draft. Bouma’s NHL career so far has included 357 games with Calgary and Chicago. Last season Bouma played in the AHL with the Ontario Reign.

The Nanaimo, B.C. native joined the Giants full-time in 2007-08 and remained a stalwart on the Giants blueline for the next five seasons. Manning’s 310 career games in a Giants uniform ranks him first all-time. During that span he scored 45 goals and added 138 assists for 183 points. Following his WHL career Manning played four seasons with the UBC Thunderbirds before beginning a pro hockey career that has taken him Switzerland, Germany and France along with the AHL and ECHL.

The younger of the two Franson brothers was drafted to the Giants in 2008 in Round 3. He joined the Giants full-time as a 17-year-old in 2010-11 and proceeded to score 89 career goals along with 92 assists for 181 points in 246 games with the G-Men. Franson then used his WHL Scholarship to attend of the University of Calgary where he played five seasons with the Dinos. Last season Franson played professionally in France.

The North Vancouver native joined the Giants in 2011-12 and went on to play 268 career games with the G-Men. His 91 goals and 107 assists for 198 points rank him eighth all-time in franchise scoring. Houck finished his WHL career with the Calgary Hitmen following a trade during his over-age season. Houck was a fourth-round pick of the Edmonton Oilers in the 2013 NHL Draft and since leaving the WHL has played some pro in both the AHL and ECHL.

140 of Payton Lee’s 222 career WHL appearances came with the Vancouver Giants who selected him in Round 2 of the 2011 WHL Bantam Draft. The pride of Cranbrook, B.C. won 52 games for the Giants during that span. His WHL career also included stops in Kootenay and Edmonton. He currently ranks third all-time in games played for a Giants goaltender trailing only Tyson Sexsmith and David Tendeck.

Surrey’s jakob Stukel was drafted by the G-Men in Round 2 of the 2012 Draft. He played 62 games with the Giants over the course of three seasons before he was traded to the Calgary Hitmen in a package that eventually brought Chase Lang and Ben Thomas to Vancouver. Stukel would end up being drafted by the Vancouver Canucks in the 2016 NHL Draft in Round 6. Last season he played in the AHL with the Bakersfield Condors.

St. Andrew, MB native Ryan Kubic played in 109 career games with the Vancouver Giants, largely over a span of two seasons between 2015-2017. He holds the franchise record for longest string of shutout hockey which he in 2015 by going 207 consecutive minutes without surrendering a goal. His 141 game WHL career also included stops in Saskatoon and Regina.

All three of these second round selections would prove fruitful for the Vancouver Giants in 2014.

Dylan Plouffe (Sherwood Park, AB) appeared in 272 career games with the Vancouver Giants (the eighth most in franchise history, and second most of any defenceman behind Neil Manning). For his career he scored 28 goals along with 95 assists for 123 career points. He added 17 points in 29 playoff games with the G-Men. Plouffe was traded to Medicine Hat in December of 2019 in a blockbuster trade that saw the Giants acquire Tyler Preziuso and Trevor Longo. Including his stint with Medicine Hat Plouffe appeared in 307 WHL regular season games.

James Malm (Langley, B.C.)  appeared in 179 career games with the Vancouver Giants. During that span he registered 48 goals and 86 assists for 134 career points. During his 19-year-old season Malm was dealt to the Calgary Hitmen in exchange for forward Tristen Nielsen. Malm’s career spanned 251 games.

Kaleb Bulych was drafted 27th overall by the Vancouver Giants in the 2015 WHL Bantam Draft. He appeared in 172 career regular season games for the Giants where he registered four goals and 19 assists for 23 points and 124 penalty minutes. Bulych also suited up in 29 career playoff games for the Giants over the course of two seasons. In November of 2019 he was traded to Swift Current in exchange for Connor Horning.

Lukas Svekovsky (Point Roberts, WA) was drafted by the Giants in the second round (33rd overall) in the 2016 WHL Bantam Draft. In 85 career games with Vancouver, Svejkovsky scored 14 goals along with 22 assists for 36 points. He added four goals and nine assists for 13 points in 22 playoff games during the Giants run to the finals in 2018-19. Svejkovsky was  traded to the Medicine Hat Tigers alongside Dylan Plouffe in December of 2019.

All three players are coming off their rookie seasons in the WHL.

Cole Shepard scored 11 goals while adding 18 assists for 29 points in 50 games to lead all Giants rookies.

Tanner Brown dressed in 57 games and supplied a goal, an assist and 44 penalty minutes.

Krz Plummer dressed in 33 games and provided one goal and 13 penalty minutes.

Drew Sim (Tees, AB) was the second goaltender selected in the 2018 WHL Bantam Draft. Sim made his WHL debut with the Giants in March of 2020. He was nominated for CSSHL Goaltender of the Year Award after a strong showing with the NAX Xtreme program.

Justin Lies drew into 49 games with the Giants during his rookie campaign in 2019-20. The Flin Flon, MB product scored one goal and added five assists for six points while adding 14 penalty minutes.

In the second round of the 2019 Western Hockey League WHL Bantam Draft, the Vancouver Giants made two selections.

Later in Round 2 the G-Men selected forward Bowden Singleton. In 24 games with the NAX Xtreme Prep program this season, Singleton scored 20 goals along with 33 assists for 53 points.