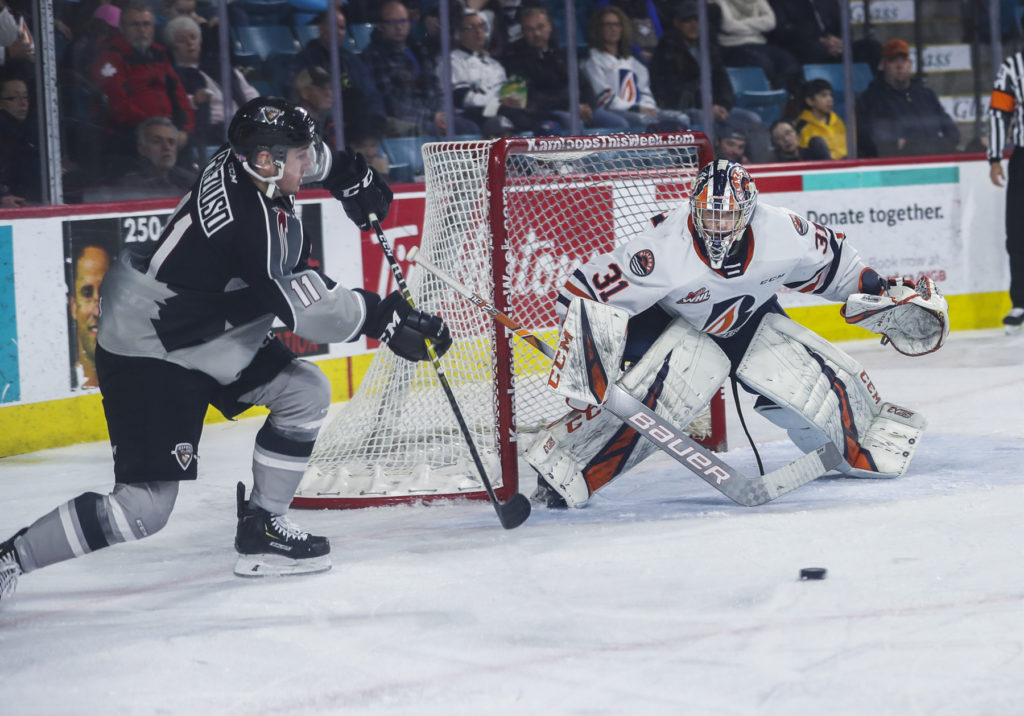 The five-game home stand continues tonight for the Vancouver Giants who put their five-game winning streak on the line against the B.C. Division leading Kamloops Blazers today at 4 PM. The Giants are coming off a 5-2 victory at home last night against Prince George Cougars while the Blazers dropped a 5-4 decision to the Victoria Royals on the road. The Blazers are looking to snap their longest winless streak of the season (four games).

Last Game: A 5-4 loss on the road last night in Victoria.

Heading into tonight’s game, Blazers forward Connor Zary is ranked fifth in league scoring with 68 points (31G, 37A). The 2001-born product of Saskatoon, SK has recorded points in each of his past five games (3G, 6A) and has found the scoresheet in 10 of his past 11 games dating back to January 4th. Now with 68 points, he’s moved a single point past his total from a season ago. Zary has scored four goals and added eight assists for 12 points in six games against the Giants so far this season. Zary is eligible for the 2020 NHL Draft and was recently ranked #12 on NHL Central Scouting’s Mid-Term Rankings List for draft eligible North American skaters. Out of all first-time NHL draft eligible players, only Portland’s Seth Jarvis (72) has more points than Zary.

The good news for Kamloops: They’re 4-1-1 on the season against Vancouver and have outscored them 24-13 in that span. The bad news: They’ve dropped their previous two meetings to the Giants. Last weekend the Blazers snagged one of a possible four points against the Giants, dropping a 5-4 overtime decision on January 31st followed by a 3-2 regulation loss at home the next night. Connor Zary (4G, 8A), Zane Franklin (5G, 3A) and Orrin Centazzo (4G, 4A) have combined for 28 points in six games against Vancouver this season.

Giants goaltender David Tendeck has accomplished plenty over the past five seasons with the Vancouver Giants. The product of North Vancouver, B.C. comes into tonight’s game against Kamloops with an overall record of 14-13-1-1. Tendeck is ranked third in the WHL with a 2.19 goals-against average and his .923 save percentage has him ranked fourth. For his career, Tendeck is 68-54-6-4 with 10 shutouts. Altogether Tendeck has appeared in 142 games with the Vancouver Giants, which ranks him second in all-time games played by a Giants goaltender behind only Tyson Sexsmith (172). He has won each of his past three starts dating back to January 26th.
UPCOMING HOME GAMES:
Following tonight’s tilt with Kamloops, the Vancouver Giants will play two more games during their five-game home stand. The G-Men return to action on Wednesday against the Red Deer Rebels at 7:00 PM and then will wrap things up on Friday against the Victoria Royals. Heading into action today the Giants trail Victoria by eight points for second place in the B.C. Division standings.
VANCOUVER NOTES:
Related Links
GET TICKETS LISTEN ON SPORTSNET 650 WATCH ON WHL LIVE
More News