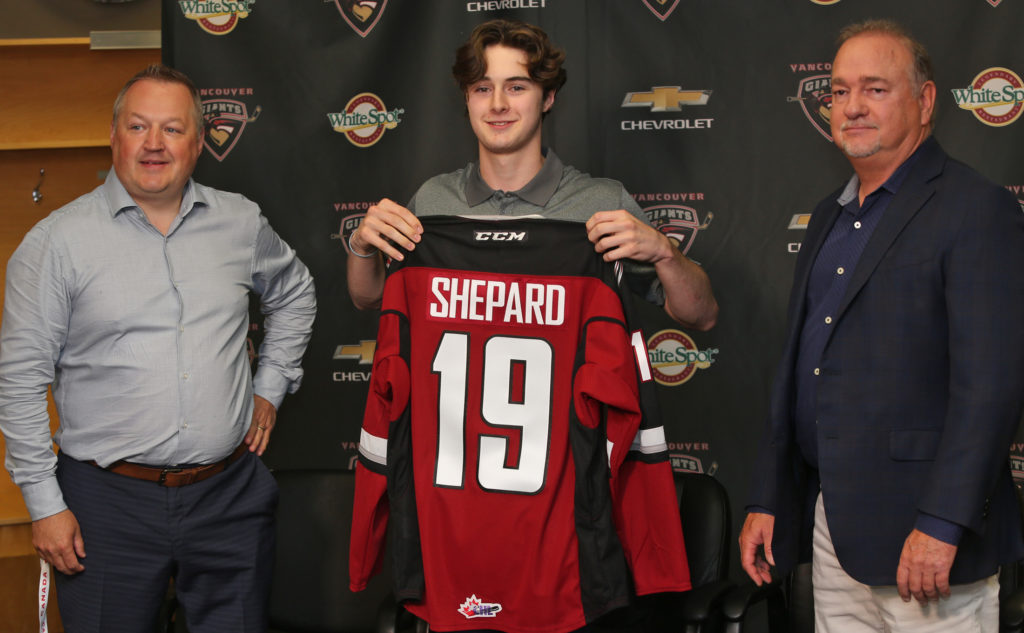 Vancouver Giants General Manager Barclay Parneta announced today that the Giants have signed 2002-born forward Cole Shepard (West Vancouver, B.C.) to a Standard WHL Player Agreement. The team made it official this morning during a media conference at the Ladner Leisure Centre.

“We are very happy to have Cole and the Shepard family committed to the Vancouver Giants,” said Barclay Parneta. “He provides a solid mix of speed and skill and can impact a game in a lot of positive ways. He’s going to be a key contributor to our success in the years to come.”

Majority owner Ron Toigo & GM Barclay Parneta welcome @ColeShepard_ and his family to the Giants, we’re happy to have you, Cole! pic.twitter.com/VhX35N2EmE

Originally selected 33rd overall by the Giants in the 2017 WHL Bantam Draft, Shepard joins the Giants after spending his 16-year-old season with the BCHL’s Penticton Vees. In 53 games the 5’10”, 152-pound forward scored seven goals and added 17 assists for 24 points. Shepard spent the two previous seasons with the Delta Hockey Academy notching 53 points in 34 games during the 2017-18 season in Midget and 47 points in 30 games in 2016-17 in Bantam. He is eligible for the 2020 NHL Draft.

Internationally, Shepard suited up for Canada Red at the 2018 World Under-17 Hockey Challenge and registered four assists in six games.

With this signing, Shepard becomes the sixth Giant from their 2017 WHL Bantam Draft class to commit to the team joining the likes of: Justin Sourdif, Tanner Brown, Krz Plummer, Braedy Euerby and Jacob Gendron. Shepard joins his older brother Jackson who was acquired by the Giants in a trade with Lethbridge on May 24, 2019.

@WHLGiants officially announce the signing of Cole Shepard…expect to see him play in Giants Top 6…he’ll also get to play with his older brother who Giants traded for last month pic.twitter.com/xTsQBXoW8J

Meet the newest member of the Vancouver Giants, Cole Shepard. He chose the Giants over Harvard where he’ll get to play with his brother next season. Call it the Bowen Bryam effect? Story tonight on @CTVVancouver pic.twitter.com/bOjJiMxOxq