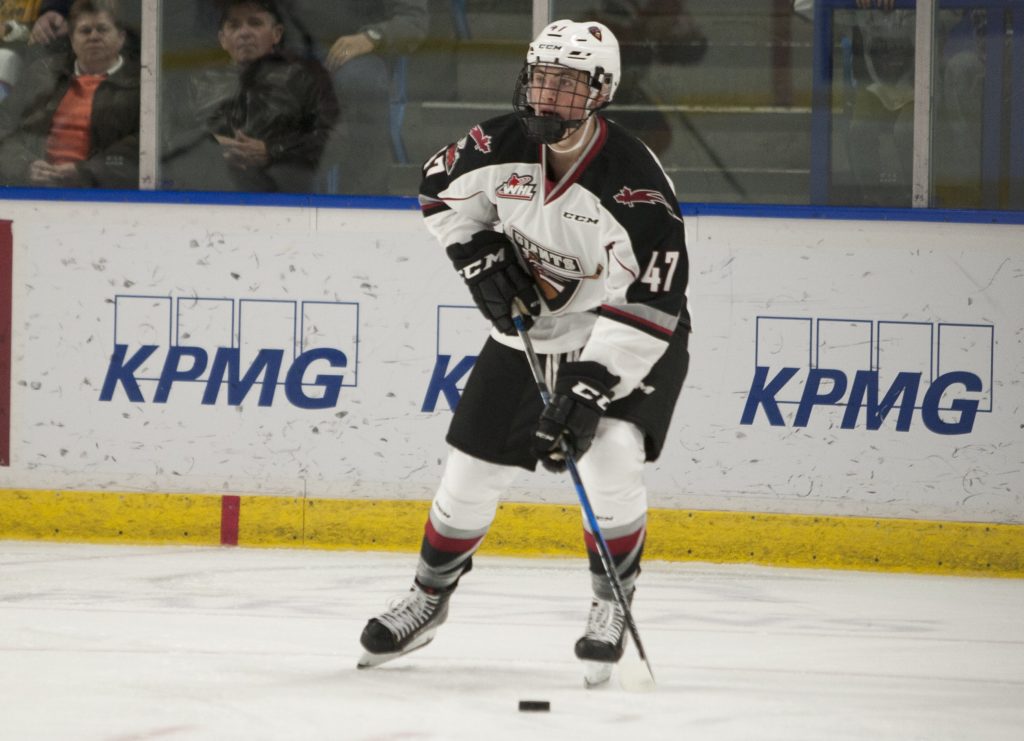 2018 has been quite a year for Giants prospect Joel Sexsmith (2002 – Edmonton, AB). The talented two-way defenceman joined the Giants organization on January 7th after a trade with the eventual champs, the Swift Current Broncos. The asking price was steep as the Giants parted ways with their 2019 first round pick in exchange for the unsigned Sexsmith. 10 days later the ninth overall pick from the 2017 WHL Draft put pen to paper and committed to the Vancouver Giants organization.

Since then Sexsmith has appeared in five games with the Giants as an under-ager and was with the team for most of their first-round playoff series with the Victoria Royals. Last week Sexsmith was among the 111 Canadian players under the age of 17 to attend Hockey Canada’s U-17 Summer Development Camp. Earlier today Sexsmith spoke with Giants broadcaster Dan O’Connor about the whirlwind year of 2018, his experience with Hockey Canada and the excitement for all that lies ahead for him as he looks to join the Giants full time in 2018-19. Here’s the latest Vancouver Giants offseason Q&A feature with Joel Sexsmith.

The Giants have signed 2002-born defenceman @JoelSexsmith to a Standard @TheWHL Player Agreement!

Welcome aboard Joel! We're thrilled to welcome you and your family to the Vancouver Giants! pic.twitter.com/phOtAHuPmS

DO: Take me back to the phone call and the moment you learned that you had been invited to attend Hockey Canada’s U-17 Summer Camp.

JS: The phone call was very emotional for me. Growing up and seeing the Juniors on TV and watching my country at the Olympics it was important for me to just soak that in and understand the gravity of how important this was. I think hockey defines us as a nation and being able to be a part of that and hopefully getting the chance to represent my country down the road was a big thing for me. After that phone call it wasn’t so much “look at how great I am” but it was more about getting to work, getting to the gym and doing whatever it took in order to be successful at the camp. That was big for me understanding that work needed to be done in order to represent my country to the best of my ability.

DO: Can you talk about the week in Calgary and what you learned not only on the ice, but off of it?

JS: One thing that Hockey Canada really stressed over the week was professionalism. The biggest takeaway for me was knowing that they are paying close attention to everything that we say and do. They don’t want us to deviate from who you are as a person because they can identify people that are pretenders. I just wanted to be myself, be professional, be a leader and be somebody that my teammates could communicate with and be comfortable with. I wanted to be inclusive, welcoming and overall just a really good leader.

The last seven months have been overwhelming at times but also reassuring. That would be a good explanation given the decision that my family and I made to join the Giants. I feel we made the right decision. It’s a decision that is going to have a huge impact on me for the next four years and hopefully for the future beyond those four years as well. We see the Vancouver Giants as an organization that can take my skill-set, my personality and who I am and elevate those things as much as possible. Whether that’s playing pro hockey and also being a good person in the world, that’s what we took out of the decision is that this is a place where I’m not only going to succeed as a player, but also as a person and as a student. I am ready to put in the work and I’m very excited for the future. – Joel Sexsmith reflecting on 2018 so far.

DO: Any surprises on the ice with the skill level around you?

JS: The days were long and hard so it was important to be efficient. Energy level was important on the ice, so maintaining a positive energy was really important for us as a team. Giving guys around you a tap on the pads or some positive reinforcement really helped us form some great chemistry. The talent and skill-set was very evident, but maintaining strong mental strength over the course of the week was a big one for me.

DO: 2018 has been a whirlwind for you, can you take me from January onwards and tell me what this journey has meant to you and your family knowing all that you know now?

JS: The last seven months have been overwhelming at times but also reassuring. That would be a good explanation given the decision that my family and I made to join the Giants. I feel we made the right decision. It’s a decision that is going to have a huge impact on me for the next four years and hopefully for the future beyond those four years as well. We see the Vancouver Giants as an organization that can take my skill-set, my personality and who I am and elevate those things as much as possible. Whether that’s playing pro hockey and also being a good person in the world, that’s what we took out of the decision is that this is a place where I’m not only going to succeed as a player, but also as a person and as a student. I am ready to put in the work and I’m very excited for the future.

DO:  How important was it for you to play some games last season and also having the chance to join the team during the playoffs?

JS: Watching some of the older players and learning from them was very important. I just tried to be a sponge and take all I could from them. It was really important as a newcomer to be welcomed how I was. Every young player entering the WHL has to take time to be thankful for that. The older players took the time to help me on top of managing their own busy schedules. My experience was amazing. It was ‘ears wide open, eyes wide open’ trying to take as much as I could away from the veterans. If they saw things that needed to be improved, they helped out. I really appreciated it and I’ll apply those things into my approach next season.

Lastly we're thrilled to recall Joel Sexsmith from @edgeschool. Huge thanks to them for lending Joel to us earlier in the season and for doing a terrific job with his development this season. Welcome back to the Giants Joel! pic.twitter.com/OnSDPLqqLx

DO: Did anybody specifically take the lead in that regard, or was it everybody?

JS: It was collective. The leadership group was great and really set the tone for the rest of the team. It really became collective not just welcoming me, but welcoming guys like Justin Sourdif, Tanner Brown, Parker Hendren, and Evan Patrician. I think that was big not just for me but for all of us seeing the leadership across the dressing room. To me that signifies a really successful team because you can have individuals lead, but if you have a team that leads together that can lead to a really good experience on the ice and off the ice as well.

DO: Has there been a summer highlight for you that has nothing to do with hockey?

JS: Honestly the summer has been pretty hectic but I did get the chance to get away for three days with my Dad on a golf retreat. For the first time ever I beat my Dad on the golf course. I wasn’t ready to beat him and nor was he ready for me to beat him haha, but that was a big highlight for me. But as I was saying to my parents and my good friend (Luke Prokop) last night – As much as we need to be teenagers and to have fun with our friends, it’s important doing it within appropriate guidelines and surrounding yourself with guys who are likeminded. Luke and I agreed that we want to really take advantage of working on our game and our strengths and who we are as people because all of the information from the U-17 Camp is so fresh in our minds. This week and the next few weeks ahead are really a time to capitalize and to get ready for all that lies ahead and making our mark with our teams. There is definitely time where you need to spend with your friends but as long as it doesn’t distract you from your end goal. That getaway with my Dad was nice, but hockey is non-stop work developing both as a player and a person. That’s my summer mindset in a nutshell.

DO: How exciting is it to be a younger player coming back to Vancouver knowing what could all potentially lie ahead for you guys?

JS: I think we’ve identified our group in Vancouver as one that’s going to be very successful for many years to come. Gelling together quickly and doing the right things to the best of our abilities is going to make for a very successful season both on and off the ice. It’s exciting for me as a rookie getting my first crack at this and taking in all I can so that I can carry it on and hopefully be a future leader. It’s going to make for a very exciting season, not just for players but for staff and fans as well. We want to be dominant and we want to give our fans a team to be proud of.