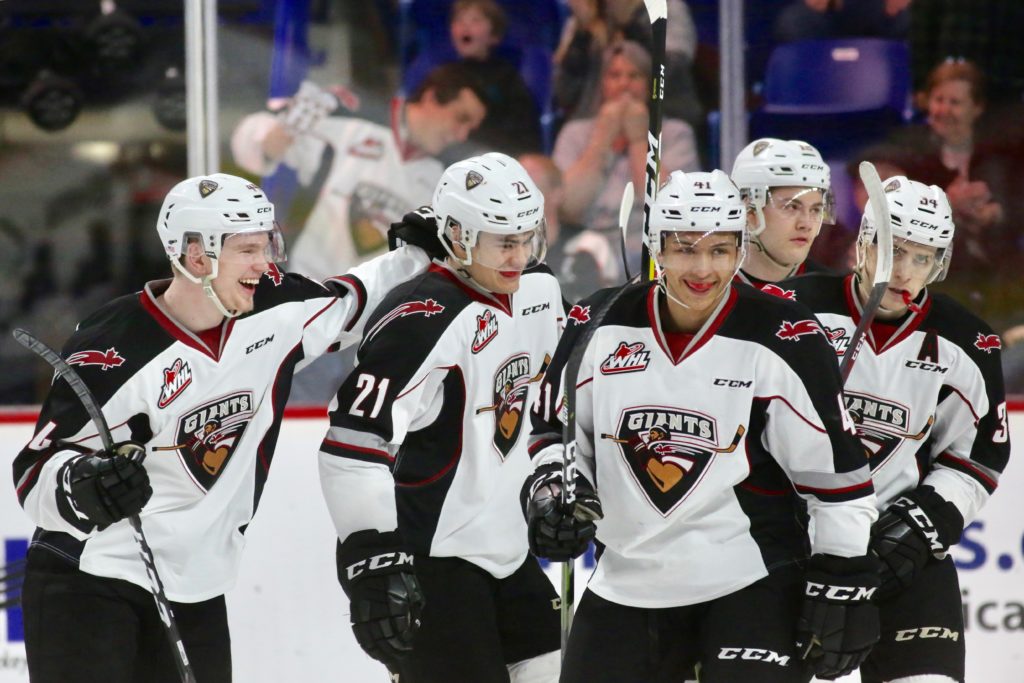 For the third time in their 18-year history, the Vancouver Giants have finished first in the Western Conference standings. Friday night in front of a crowd of 4560 at the Langley Events Centre, the Vancouver Giants (48-15-2-2) defeated the Kelowna Rockets (26-32-6-2) by a 2-1 score. Giants defenceman Dylan Plouffe broke open a 1-1 tie with a power play goal at 16:50 of the third period to help give the Giants their sixth win of the season against Kelowna and their 26th win of the season on home ice. Alex Kannok Leipert added his fifth goal in the second period for the Giants who, with the Western Conference regular season championship will now face the Seattle Thunderbirds in Round 1. The Kelowna Rockets lone goal came from Kyle Crosbie. They now head into their final regular season game tomorrow night against Vancouver tied with Kamloops with an identical record and the final available playoff spot in the Western Conference.

VAN – At 3:36 of the second period Alex Kannok Leipert (5) opened the scoring when his shot from the slot trickled ‘just’ across the line through Kelowna goaltender Roman Basran. Brayden Watts drew the lone assist.

KEL – Back came the Rockets at 11:01 when Kyle Crosbie snuck a low shot between the legs of Giants starter Trent Miner. Crosbie’s seventh was unassisted.

VAN – With 3:10 to play the Giants capitalized on their lone power play chance of the game. Davis Koch’s cross-ice pass bounced off the leg of a Rockets defender and right to Dylan Plouffe in the right-wing circle. Plouffe’s low shot snuck through a crowd and past Roman Basran to send a jubilant LEC crowd into a frenzy! Plouffe’s eighth of the season was assisted by both Koch and Bowen Byram and stood as the game (and Western Conference) winner!

Kelowna: 0/1 on the Power Play

Next Giants Game: Tomorrow night in Kelowna against the Rockets at 7:05 PM.