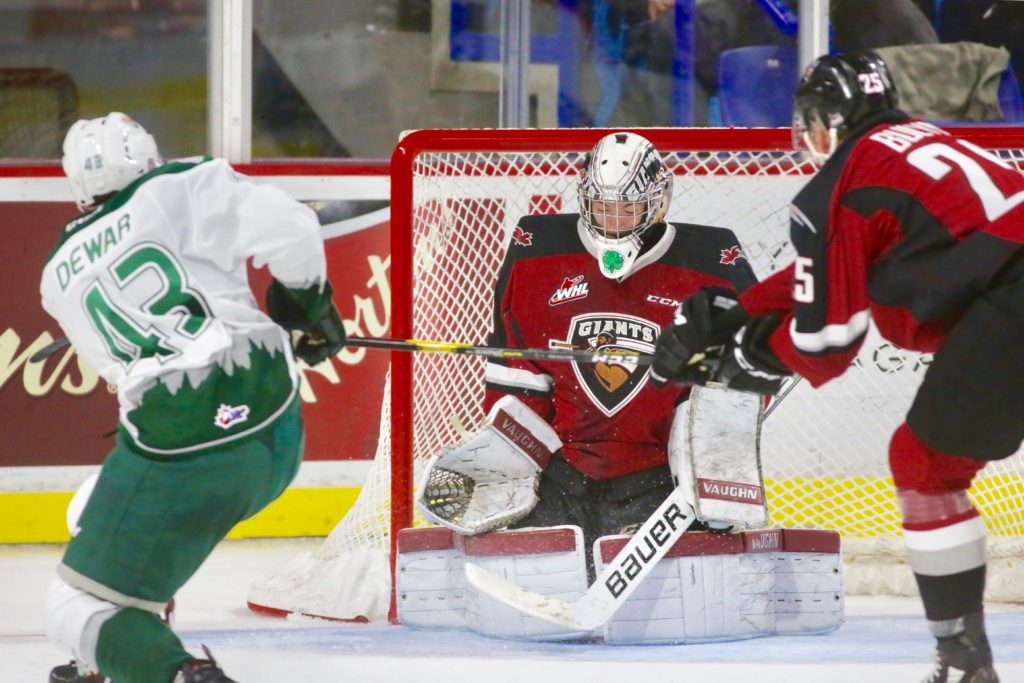 In front of 3952 strong, the Vancouver Giants earned a 3-1 victory over the Everett Silvertips Friday night at the Langley Events Centre. James Malm paced the Giants attack with two goals and David Tendeck turned aside 30 of the 31 shots fired his way. Martin Fasko-Rudas had the lone goal in response for the visitors which came late in the first period.

The opening 20 minutes saw both teams strike once. 7:52 into the first period Owen Hardy got the Giants on the board when he slipped a shot by Everett netminder Dustin Wolf. Hardy’s goal was assisted by Davis Koch.

Back came the Silvertips at 15:01 when Martin Fasko-Rudas parked himself in front of David Tendeck and tipped home a Wyatte Wylie point-shot to even the score. Shots were 13-10 for Vancouver after one.

The score remained tied until the very late stages of the second period when Giants forward James Malm restored the lead for Vancouver off the rush. Malm darted down the right wing, out-waited the defender and then blasted a quick shot past the glove of Wolf and in for his first of two goals on the night.

Big Goal late in the 2nd by @James_Malm to put the good guys up 2-1 pic.twitter.com/4x8eE4iVtz

Thanks to a heroic left pad save from David Tendeck at the buzzer, the G-Men took their 2-1 lead into the second intermission. Shots were even at 20-20 after two.

Everett outshot the Giants 11-3 in the final frame, but David Tendeck would not relent. The Arizona Coyotes prospect kept his team ahead by one and in the final minute with the Everett net empty, James Malm clinched victory for his club with an empty-net goal with 38 seconds to go.

Final shots were 31-23 for Everett who finished the night one-for-four on the power play. The Giants went zero-for-five.

These two clubs won’t have to wait long to get reacquainted as they’ll face one another tomorrow night at 7:05 PM down South in Everett, WA.