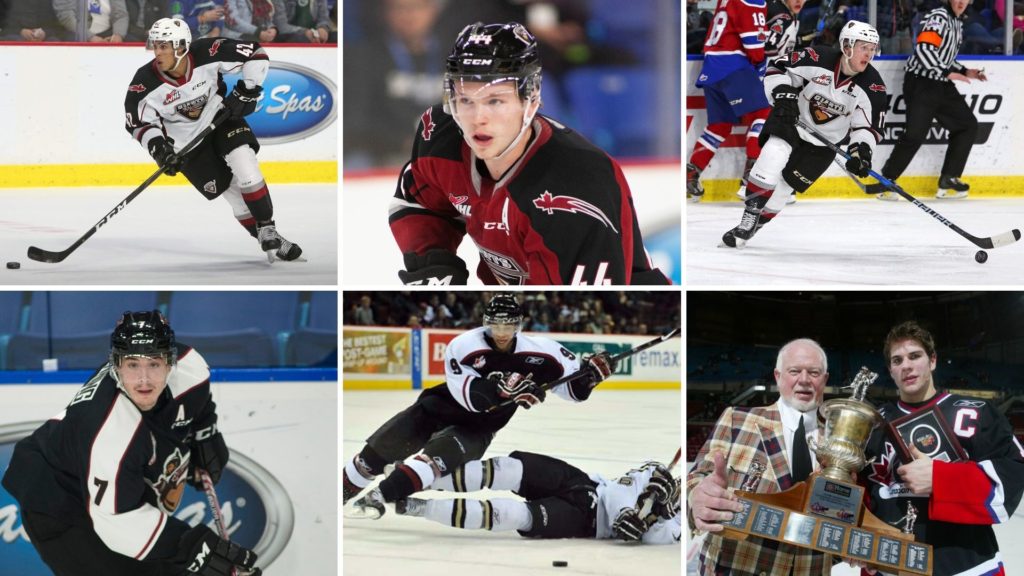 On Wednesday, April 22nd the Vancouver Giants will be participating in the WHL Bantam Draft for the 20th time in their franchise’s rich history. The Bantam Draft is wide regarded as the “lifeblood” of any WHL team and it’s no secret that strong drafting generally leads to strong results on the ice. Over the years the Vancouver Giants have made 22 first round selections. Today we’ll review those selections.

With their first ever selection the Giants drafted bruising defenceman Mark Fistric out of Edmonton, AB. Fistric would suit up in 214 career regular season games with the Giants. His best season came in 2005-06 where he scored seven goals and added 22 assists for 29 points while captaining the Giants to a WHL Championship. In 2004 the Dallas Stars drafted Fistric with the 28th overall pick, and his NHL career spanned parts of eight seasons. He appeared in 325 NHL games with Dallas, Edmonton and Anaheim.

Gilbert Brule’s three-season tenure with the Vancouver Giants remains one of the best ever. The Giants selected the North Vancouver product first overall in 2002 and from there he’d go on to play 165 career regular season games with the Giants. He finished his WHL career with 87 goals and 98 assists for 185 points. He added 44 points in 39 career playoff games, and was instrumental in helping the Giants to a 2006 WHL Championship. Brule was named the 2006 WHL Playoff MVP and also took home MVP honours at the 2005 Top Prospects Game. The Columbus Blue Jackets drafted him sixth overall in 2005. Altogether he played 299 career NHL games with Columbus, Edmonton and Arizona. He is still playing professionally in the KHL.

Daniel Bertram never committed to the Western Hockey League. After a four-year stint at Boston College he played professionally for two seasons in both the AHL and ECHL. He was a second round draft pick of the Chicago Blackhawks in 2005. He represented Canada at both the 2006 and 2007 World Juniors.

Jason Reese was a a 5’11”, 176-pound forward who the Giants selected out of the USA. He played in 179 career regular season games with the Giants and an additional 23 playoff games. He supplied eight points in 18 games during the Giants run to the 2006 WHL Championship. A season later he was traded to Moose Jaw along with a second round pick for Kenndal McArdle. Altogether Reese’s WHL career featured stops in Vancouver, Moose Jaw and Tri-City. He posted 273 points in 317 games.

Tyson Sexsmith was the first goaltender ever selected by the Giants in Round 1 of the WHL Bantam Draft. He would ultimately become the winningest goaltender in the 19-year history of the Vancouver Giants. His career record through 178 games with Vancouver was 120-35-6-15 with a 2.00 goals-against-average and .907 save percentage. His 26 career shutouts rank him tied for first in WHL history. Sexsmith led the Giants to 30 additional playoff victories in 49 appearances. He backstopped the Giants to a 2007 Memorial Cup championship. He was drafted by the San Jose Sharks in Round 3 of the 2007 NHL Draft.

With the ninth overall pick in 2005 the Giants drafted forward James Wright out of Saskatoon. The 6’3″ forward appeared in 202 career regular season games with the Giants and an additional 53 playoff games. The Giants captured the 2007 Memorial Cup during Wright’s rookie season. In 2008 Wright was drafted by the Tampa Bay Lightning in the fourth round of the NHL Draft. His NHL career lasted 146 career games with Tampa Bay and Winnipeg. His pro career has also included stops in the KHL and Sweden.

In 2006 the Giants stayed local with the selection of Vancouver product Evander Kane. As an under-ager, Kane appeared in five playoff games with the Giants in 2007 on their way the WHL final against Medicine Hat. During his two full seasons with the Giants Kane recorded 73 goals and 65 assists for 138 points in 134 games. His 48 goals during the 2008-09 season is the second highest single-season goal total ever for the Vancouver Giants. Evander Kane was drafted fourth overall by the Atlanta Thrashers in 2009 and has since played in 713 career NHL games with Atlanta, Winnipeg, Buffalo and San Jose. Internationally Kane represented Canada in the 2009 World Juniors.

Mitch Spooner’s WHL career was limited due to injury. The defenceman was drafted out of Port Moody, B.C. He appeared in just 26 career games with the Vancouver Giants and 84 games over the course of four seasons in the WHL (with stops in Regina and Seattle). In 2009 the G-Men traded Spooner to the Pats.

Defenceman Zach Hodder was drafted out of Delta B.C. in 2008. Injuries limited him to just 50 games over the course of two seasons with Giants, and in 2011 he was dealt to Saskatoon in a trade that sent over-age goaltender Adam Morrison back to the Giants. Hodder’s playing career in the WHL lasted 128 games but his history with the WHL was far from over. In 2018 Hodder joined the WHL Office as Manager, Player Development. In his new role, Hodder is responsible for leading the WHL player recruitment and development programs.

The G-Men drafted the Abbotsford-born forward with the 21st overall pick in 2009. Over the next five seasons, Sward would appear in 294 career games with the Giants where he compiled 59 goals and 57 assists for 116 points. Only Neil Manning (310) and Craig Cunningham (295) have appeared in more games for the G-Men. Following his WHL career, the former captain enrolled at the University of Lethbridge where he spent five seasons playing for the University of Lethbridge Pronghorns.

Richmond’s Anthony Ast was chosen by the G-Men with the 19th overall pick in 2010. Injuries limited Ast to 109 games  over the course of four seasons with Vancouver before being traded to Medicine Hat in 2014. He played an additional 48 games with the Tigers. He recorded 64 points in 157 career WHL games.

Thomas Foster (Slave Lake, AB) was the 20th overall pick of the Giants in 2011. His career in the WHL lasted the full five seasons and 289 games. All but 30 of those games were spent with the Giants before he was dealt to Moose Jaw in 2017 at the Trade Deadline. Through 259 games with Vancouver Foster scored 42 goals along with 84 assists for 126 points. He sits 10th on the Giants all-time games played list.

Another Ronning was about to make hockey headlines in the city of Vancouver. Ty Ronning was picked by the Giants in 2012 with the 15th overall pick and would go on to become one of the most dynamic offensive players in the history of the franchise. But it didn’t happen overnight. Ronning scored nine goals in his rookie season, and then had just one goal in an injury-shortened 2014-15 season. In 2015-16 he scored 31 goals, played in the CHL/NHL Top Prospects Game was drafted by the New York Rangers in Round 7 of the 2016 NHL Draft. As an over-ager, Ty Ronning scored 61 goals during the 2017-18 season and was named a WHL second-team all-star. For his efforts he earned an NHL contract with the New York Rangers and is currently playing in their system. Ronning remains the only Giant to ever surpass 50 goals in a single season.

Tyler Benson’s well-documented WHL journey featured several extreme highs and lows along the way, but it was ultimately a happy ending for the second ever player selected first overall by the Giants. Because of some unfortunate injury luck, Benson’s WHL career spanned just 190 regular season games. But the eventual  Giants captain managed 184 points in 190 career games, and during the 2017-18 season he helped lead the Giants back to the playoffs after a three-year absence. Benson was drafted his hometown Edmonton Oilers in Round 2 of the 2016 NHL Draft and in February of 2020 he made his NHL debut with Edmonton.

Matt Barberis was a smooth-skating defenceman drafted out of Surrey B.C. and he would go on to play 168 career games on the Giants blueline over the course of five seasons. His best season came in 2017-18 when he scored three goals and added 27 assists for 30 points while helping guide the Giants back to the playoffs. In his final season in the WHL, Barberis played nine games with the Giants before finishing his career with the Kelowna Rockets.

The G-Men drafted Dawson Holt out of Saskatoon with the eighth overall pick in the 2014 WHL Bantam Draft. Holt would go on to play 200 career games with the Giants over five seasons where he 25 goals and added 51 assists for 76 points. Holt had a knack for the playoffs though. In 29 carer playoff games with Vancouver Holt supplied nine goals and 15 assists for 24 points including 16 points in 22 games last season with the Giants on their road to Game 7 of the WHL final. Holt’s WHL career ended this season with the Regina Pats.

Brendan Semchuk was drafted out of Kamloops with the 10th overall pick that year. He played in 127 career games with the Giants where he tallied 17 times along with 24 assists for 41 points. In January 2018 Semchuk was dealt to the Edmonton Oil Kings as part of a package that landed the Giants David Koch. Semchuk’s 158 game WHL career also included a brief stop with the Kootenay ICE.

In 2015 the Giants stayed local with the selection of Surrey’s Tyler Popowich. The 6’4″ forward appeared in 123 career games with the Giants over the course of two full seasons. He recorded 15 goals along with eight assists for 23 points in that span. Popowich retired from hockey prior to the 2018-19 season.

With the third overall pick in the 2016 WHL Bantam Draft the G-Men went to Cranbrook, B.C. to select defenceman Bowen Byram. His hockey resume up to this point includes the following accomplishment. He was the WHL Western Conference Rookie of the Year in 2017-18. He led all WHL defencemen with 26 goals in 2018-19. He set a new single-season WHL record with six overtime goals in 2018-19. He then led the WHL playoffs with 26 points in 2018-19 making him the first defenceman ever to do so. Ahead of the 2019 NHL Draft he  was named the 2019 CHL Top Prospect. He’s a two-time WHL all-star. He was drafted fourth overall by the Colorado Avalanche in the 2019 NHL Draft and he captured a gold medal during the 2020 World Juniors. In 188 career regular season games with the Giants he has managed 46 goals and 104 assists for 150 points.

Trent Miner was just the second ever goaltender selected by the Vancouver Giants in Round 1 of the WHL Bantam Draft. The Brandon, MB native has appeared in 69 career regular season games with the Giants and has accumulated 41 wins along with four shutouts, a 2.56 goals-against average and a .909 save percentage. He went 4-2 last season in six playoff appearances. Miner’s strong 2018-19 season helped him get drafted by the Colorado Avalanche in Round 7 of the 2019 NHL Draft.

Fresh off his second season with the Giants, Justin Sourdif (Surrey, BC) finished the 2019-20 season with a new career high in both goals (26) and points (54). His +30 rating was tops on the team as were his six game-winning goals. His 26 goals ranked him second on the team and his 54 points had him ranked third. In 125 career regular season games with the Giants, Sourdif has registered 49 goals and 51 assists for 100 points. In January of this year, Sourdif represented the Giants and the WHL in the Kubota CHL/NHL Top Prospects Game. Internationally he helped Canada capture a silver medal at the 2019 Hlinka Gretzky Cup. In 2018 he represented Canada at the World Under-17 Hockey Challenge. He is considered a top prospect for the 2020 NHL Draft.

Two years ago, the G-Men selected forward Zack Ostapchuk (St. Albert, AB). He suited up in six regular season games for the Giants during the 2018-19 regular season, and then dressed in two playoff games during their run to the Rogers WHL Championship final. He then joined the Giants full time in 2019-20 where he scored five goals along with three assists for eight points in 44 games. Unfortunately his rookie season was cut short in late January due to a lower body injury, but a full recovery is expected and Ostapchuk is looking to play a big part in the Giants success moving forward. Yesterday Ostapchuk spoke about his tenure with the Giants up to this point.

*Tomorrow we’ll be profiling some of the significant players to play for the Giants that were selected in both the second and third rounds.