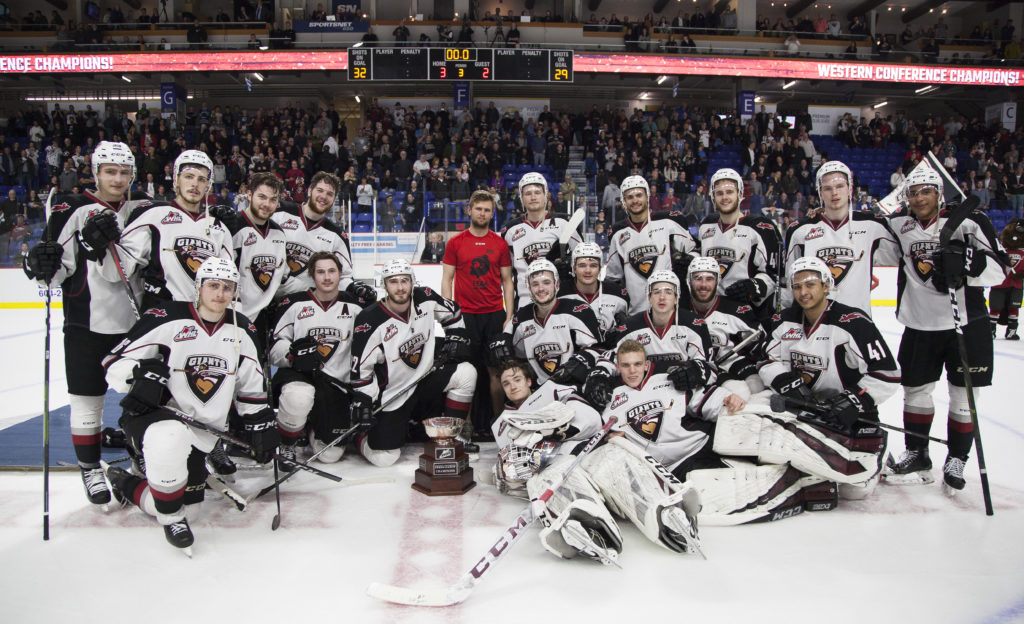 For the third time in the 18-year history of the franchise, the Vancouver Giants have advanced to the Western Hockey League Finals! Friday night at the Langley Events Centre in front of 4886 strong, the Giants earned a 3-2 victory over the Spokane Chiefs. Justin Sourdif and Bowen Byram each had a goal and an assist for the Giants while goaltender David Tendeck finished with 27 saves on 29 shots faced in goal. Jaret Anderson-Dolan and Ethan McIndoe had the goals in response for the Chiefs. The Giants will now await their championship opponent as the Prince Albert Raiders currently lead the Edmonton Oil Kings 3-2 in their Eastern Conference Championship series.

VAN – Bowen Byram (7) got the Giants on the board at 16:42 with an unassisted, shorthanded tally. Byram skated the puck up ice, faked wide to the right before cutting to the middle and wiring a low shot past Bailey Brkin and home to move the G-Men ahead 1-0.

VAN – Two minutes and 40 seconds later on a power play the Giants increased their lead when Dylan Plouffe’s rebound off a shot from the right-wing point bounced off Justin Sourdif (2) and past Bailey Brkin to make it a 2-0 game.

SPO – At 4:22 of the final period the Chiefs got on the board when Jarret Anderson-Dolan’s shot from the right-wing circle snuck through traffic and past David Tendeck to make it a 2-1 game.

VAN – 21 seconds later the home side responded when Brayden Watts knocked home an Alex Kannok Leipert rebound to move the Giants ahead by two once again.

SPO – With just under two minutes remaining in the third, the Chiefs (with their net empty) moved back within one when Ethan McIndoe parked himself in front of the Giants net and lifted a high shot over David Tendeck’s shoulder off a feed from behind the net. That’s as close as the Chiefs would come though as the Giants were able to shut the door from then on out.

Spokane:1/4 on the Power Play

TICKETS FOR THE GIANTS FIRST TWO HOME GAMES OF THE ROGERS WHL CHAMPIONSHIP SERIES ARE ON SALE HERE!