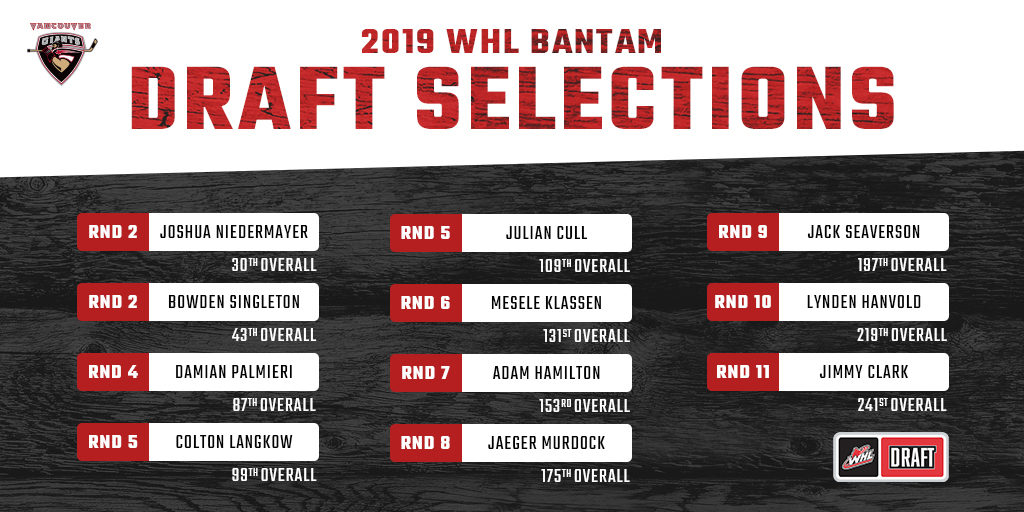 The 2019 WHL Bantam Draft is complete and the Vancouver Giants are thrilled to welcome 11 new 2004-born players to their organization. 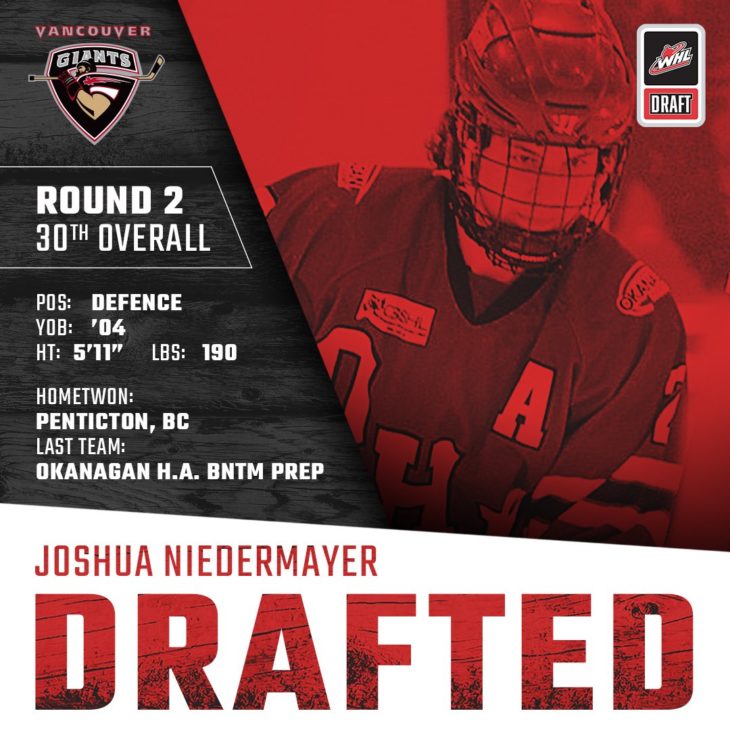 In 27 games this season with OHA, Niedermayer registered 10 goals and 12 assists for 22 points to go along with 26 penalty minutes. In three playoff games, Niedermayer added one goal and one assist for two points.

Niedermayer, a dual-citizen, checks in at 5’11”, 190 pounds and is a left-handed shot. His father is NHL Hall of Fame defenceman Scott Niedermayer. 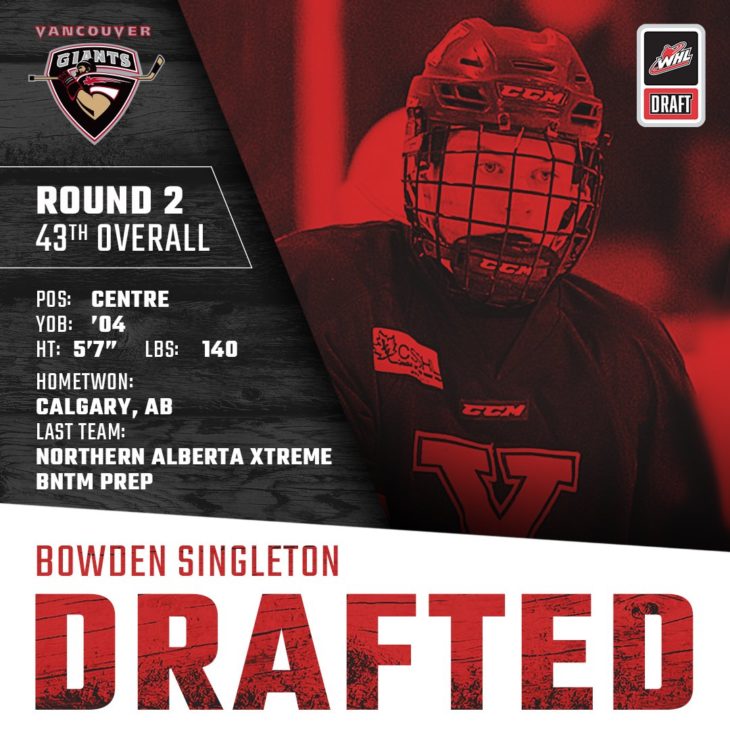 In 29 games with NAX, Singleton registered 42 goals and 24 assists for 66 points along with 40 penalty minutes. Singleton is a left-handed shot who checks in at 5’7” and 140 pounds. During the 2019 Alberta Cup, he notched eight goals and eight assists for 16 points in fives games with Team Alberta Green. 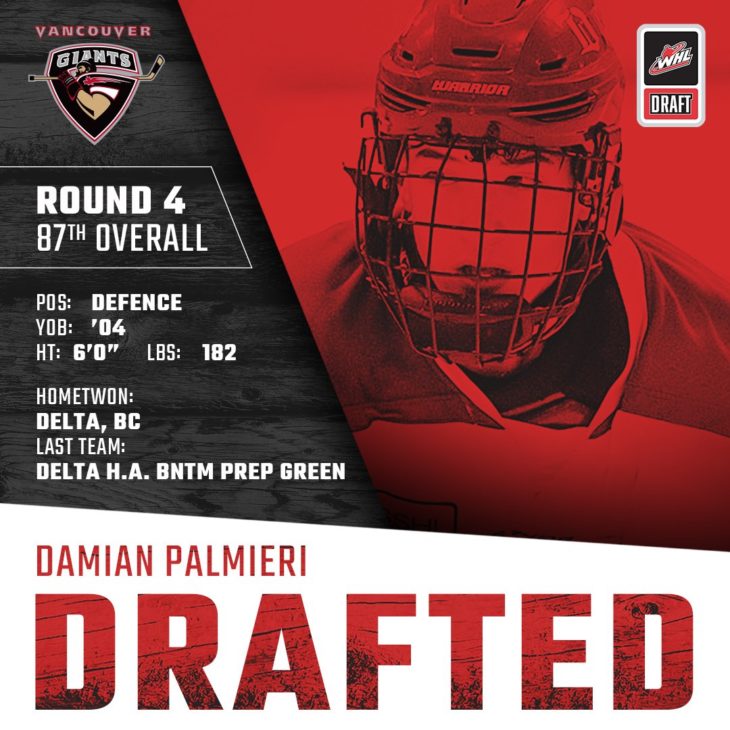 With their lone fourth round selection, the Giants selected Delta, B.C. native Damian Palmieri from the Delta Hockey Academy.

Palmieri is 6’0”, 182 pounds and a left-handed shot. He scored seven goals and added 15 assists for 22 points in 29 games with Delta and added a goal in three playoff games. Palmieri was the second defenceman selected on Thursday by the Giants. 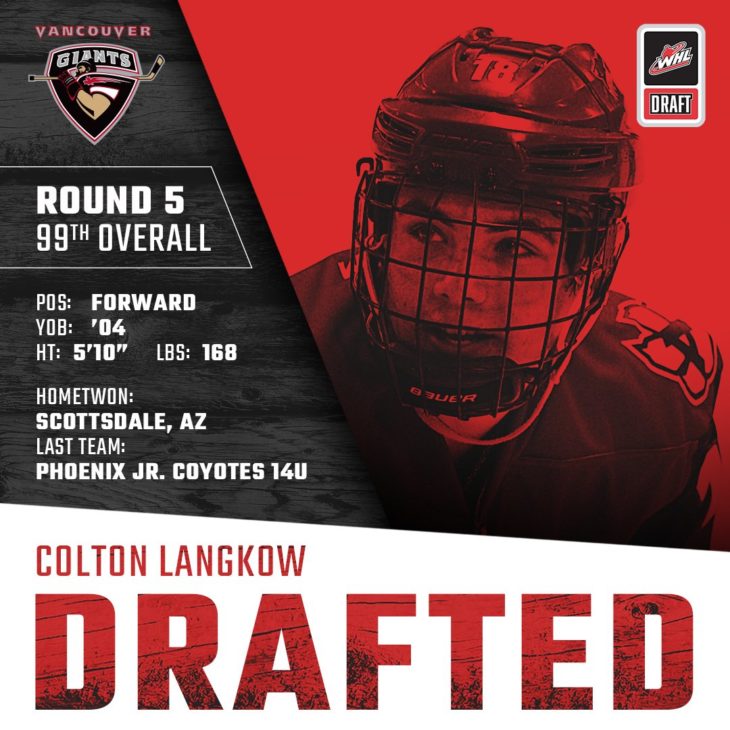 With their first of two fifth round picks the Giants went South to Arizona to select forward Colton Langkow from the Phoenix Jr. Coyotes.

The 5’10”, 168-pound forward is a right-handed shot and scored 10 goals along with five assists for 15 points in 22 games split with the Phoenix Jr. Coyotes Bantam Minor and Bantam AAA teams. He is the son of former NHL’er Daymond Langkow and was the second American player (Joshua Niedermayer has dual-citizenship) selected by the Giants on Thursday. 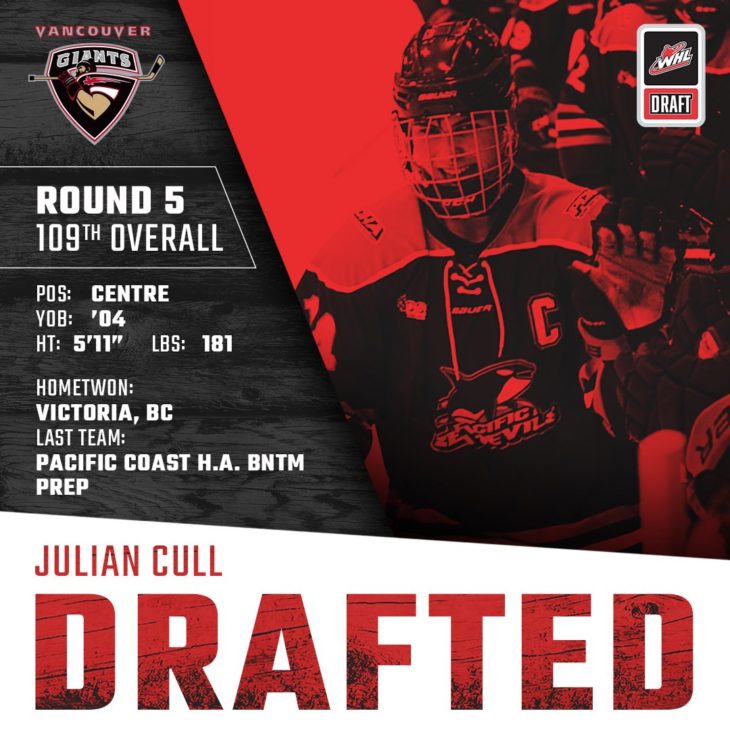 The Giants went back to B.C. with their next fifth-round selection. With the 109th overall selection the Giants selected forward Julian Cull from the Pacific Coast Hockey Academy.

Cull, a right-handed shot, checks in at 5’11” and 181 pounds. In 29 games he scored 22 goals along with 14 assists for 36 points and 16 penalty minutes. He was captain of his team. He was the third forward and third B.C.-born player selected by the Giants. 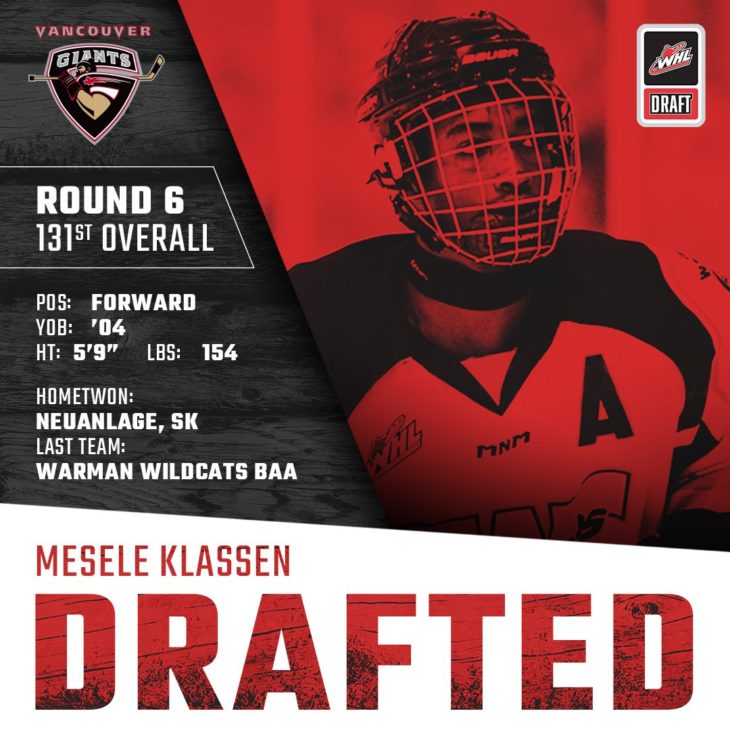 Klassen is a left-handed shot, 5’9” and 154 pounds. He was the fourth forward and the first (and only) Saskatchewan-born player selected by the Giants on Thursday morning. 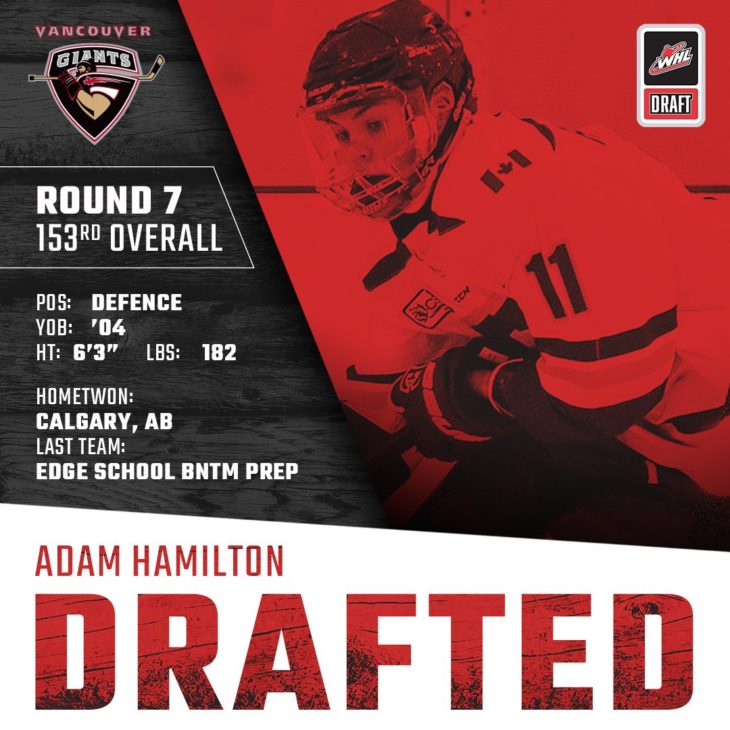 In Round 7 the G-Men went back to Alberta to select defenceman Adam Hamilton from the Edge School Bantam Prep program.

At 6’3” and 182 pounds, the right-shot defenceman recorded four goals and four assists for eight points in 20 games. He added 72 penalty minutes. In five games with Alberta Red at the Alberta Cup he added an additional eight penalty minutes. He was the third defenceman and the second Alberta-born player drafted by the Giants on Thursday. 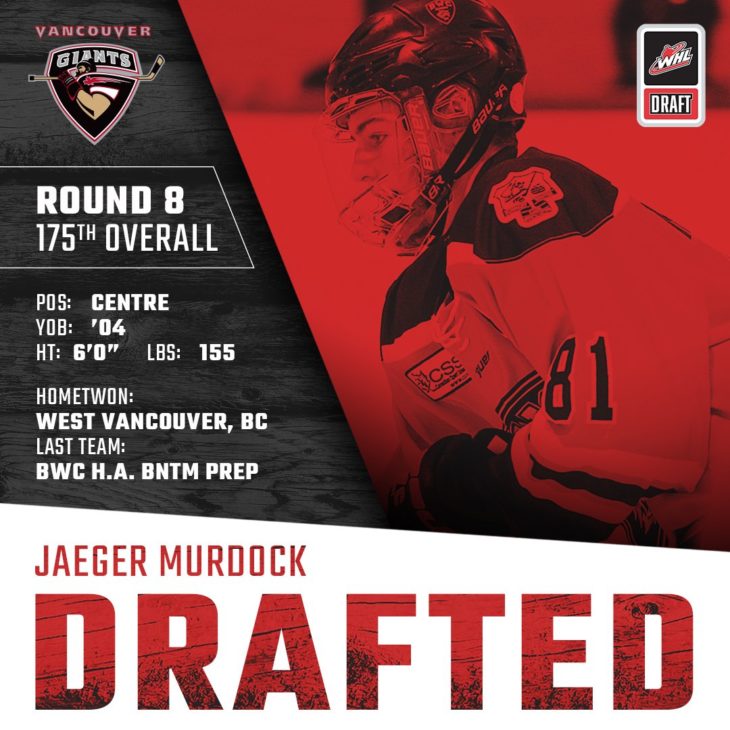 Murdock is 5’11”, 161 pounds and a right-handed shot. He scored 21 goals along with 22 assists for 43 points in 30 with the Burnaby Winter Club Bantam Prep program. He was an alternate captain. He was the fifth forward and the fourth BC-born player drafted by the Giants on Thursday. 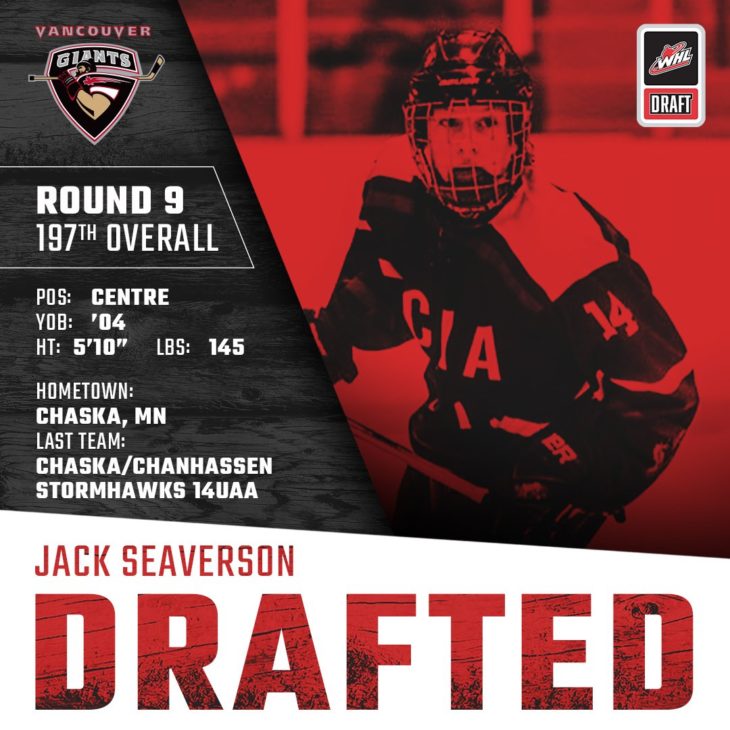 The Giants went to Minnesota in Round 9 to select forward Jack Seaverson (Chaska, MN) from the Chaska/Chanhassen Stormhawks.

Seaverson is 5’10”, 141 pounds and a left-handed shot. He played last season with the Chaska/Chanhassen Stormhawks 14UAA program and the MNBEL Penguins. In 14 games with the Penguins, Seaverson recorded three goals and three assists for six points. He was the sixth forward and third American player selected by the Giants in 2019. 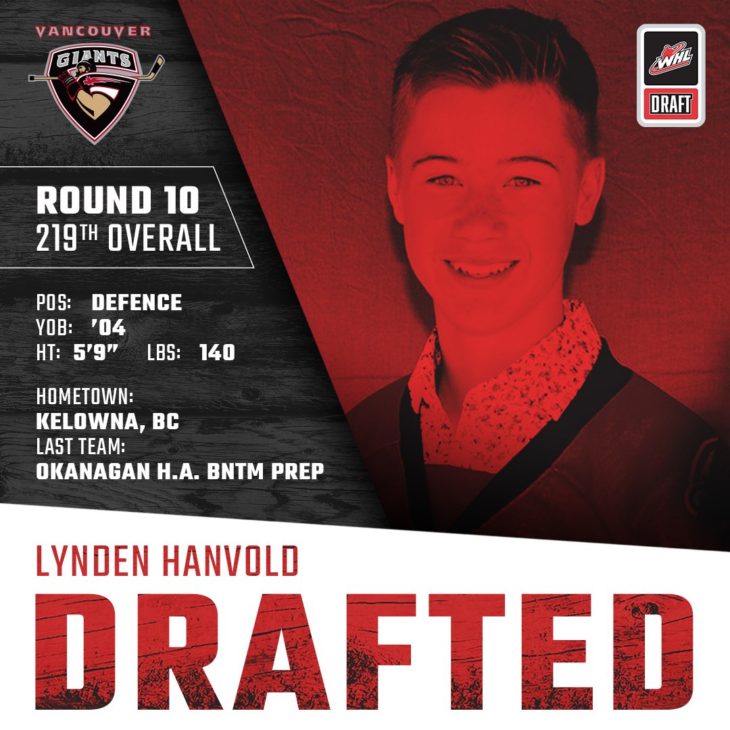 Lynden Hanvold (Kelowna, BC) was the final defenceman selected by the Vancouver Giants in the 2019 WHL Bantam Draft. He was selected in the 10th round, 219th overall.

He was the fourth defenceman and the fifth BC-born player drafted by the Giants in 2019. 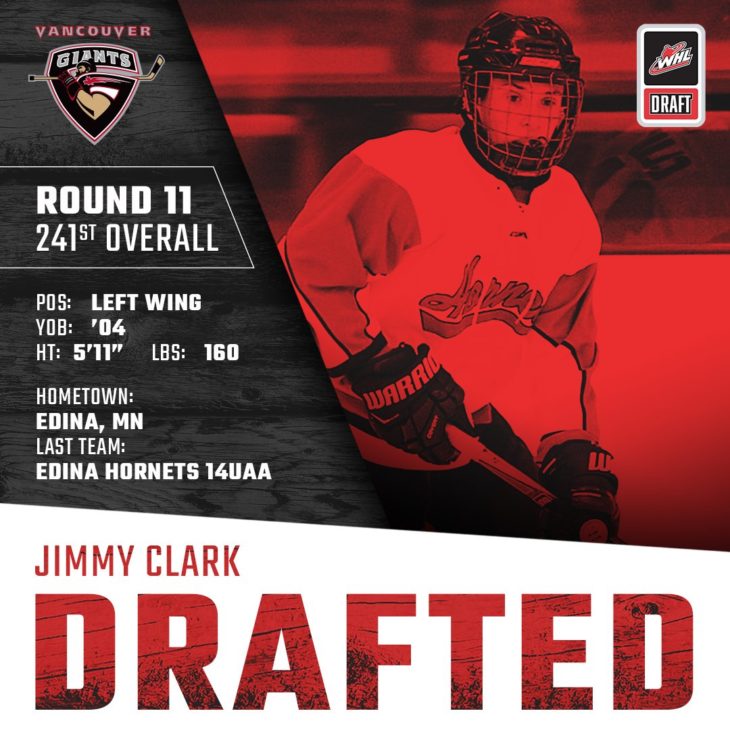 With their final selection in the 2019 WHL Bantam Draft, the Vancouver Giants went down South again to select forward Jimmy Clark (Edina, MN) from the Edina Hornets.

The 5’11”, 160-pounder is a left-handed shot and struck for 17 goals and 20 assists for 37 points in 23 games with Great Plains in the Minnesota Bantam Elite League. He was the seventh forward and the fourth American-born player drafted by the Vancouver Giants in 2019.

Here is a breakdown of the Giants draft picks by region and by position: