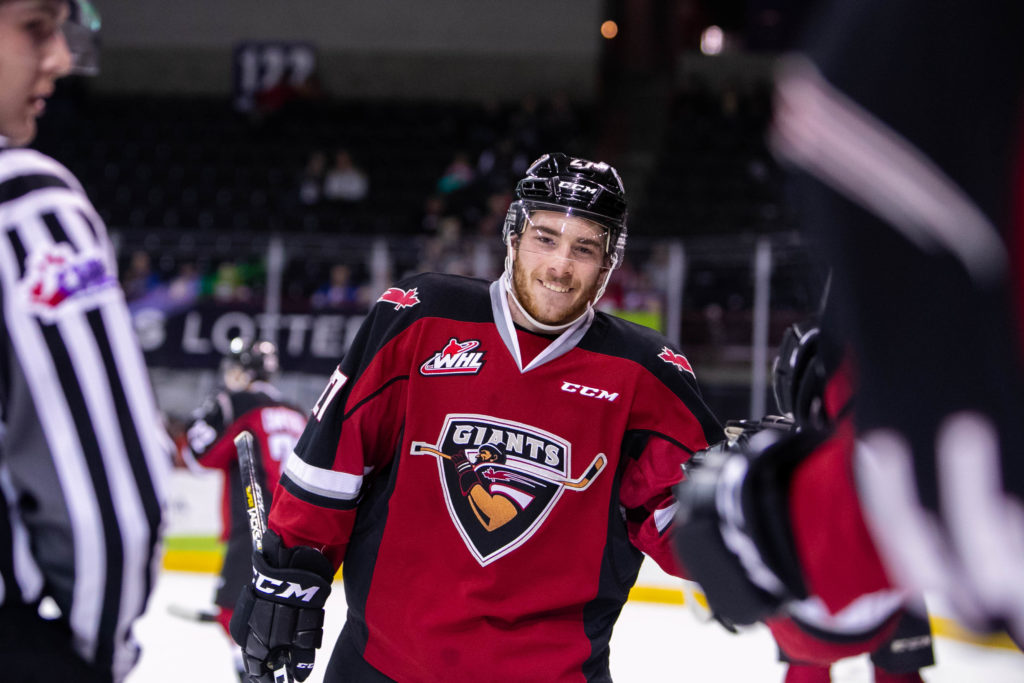 When Seth Bafaro’s phone rang on January 2, 2019 he was caught off guard. A day earlier Bafaro’s team, the Saskatoon Blades, had made a trade for right-handed defenceman Reece Harsch, and due to a numbers game, Bafaro was traded for the second time in less than two years. Only this time he was heading home(ish). Bafaro, a product of Revelstoke, B.C. would get the chance to play in his home province for a Giants team that had high playoff aspirations.

That, coupled with a familiarity with Giants General Manager Barclay Parneta helped pave the way for Seth Bafaro’s best stretch of WHL hockey so far. He logged mega minutes for the Giants mostly paired alongside Dylan Plouffe. In 28 regular season games with the Giants, Bafaro scored twice and added three assists, and then added eight assists and a +4 rating in 22 playoff games. Not bad for a player who was acquired for a fifth-round draft pick in the 2021 WHL Bantam Draft.

Earlier this week, Giants broadcaster Dan O’Connor spoke with Seth Bafaro about a number of different topics. Here is the first 2019 Vancouver Giants offseason Q and A of the summer, with 2000-born defenceman Seth Bafaro.

SETH BAFARO OFFSEASON Q AND A:

SB: Haha. Well yeah. I definitely think about it. I don’t know how often, but it’s definitely in the back of my mind, especially if I’m doing anything hockey related. That was one of the worst feelings I’ve had in my life and I want to do anything I can not to feel like that ever again.

DO: Have you talked to other guys about it? Does the conversation still revolve around last season or has the attention started to shift towards next season?

DO: Take me back to early January. Your phone rings and you are told that you are being traded to the Giants. Was this a surprise? When you learned it was the Giants did it make it any easier?

SB: The night before we traded for a right handed defenceman (Reece Harsch). I didn’t have any idea though that I was going to be traded. But I got a call from the GM and I was told that I was traded. When I knew it was Vancouver I was pretty happy for sure. I was moving closer to home and I had always heard good things about Vancouver and they’ve always had a winning culture. I was really nervous but all in all it was a really good move for me and I’ve excelled since I’ve gotten there. So in a lot of ways it was a happy day looking back.

DO: It wasn’t the first time you had been traded. Was it any easier the second time around?

SB: It was definitely easier the second time. I was a year older and a little more comfortable. It sucks having to leave your team and your friends but I was excited that the Giants wanted me and I was excited to get things going.

DO: The final connection with the trade was the fact that you had a previous rapport with Giants GM Barclay Parneta. He scouted you and then drafted you to the Tri-City Americans. Was there a comfort there with Barclay when you got that phone call from him?

SB: For sure. I talked to Barclay a lot when I was in Bantam and we had a positive relationship already. When he called me he told me that he knew what I was capable of and how I played. It was comforting to hear that from him and it really helped my confidence making that transition to the Giants.

DO: The hockey you played with the Giants from January on. Is that the best hockey you’ve played so far in the WHL?

SB: I definitely think it was the best hockey I’ve played so far. I think a lot of it goes back to what Barclay had said to me when he traded for me. He knew the type of player I am, he knew what I could do and he told me to go out there and not overthink what I’m doing. Mainly it was a confidence thing and it really helped.

DO: Was there a moment, or a game, during the run to the playoffs where you stopped and thought: “I know that this team has a chance to do what they ended up doing?”

SB: It was pretty soon honestly. I got traded towards the end of their Central swing and it wasn’t going too well. But I remember the feeling around the dressing room was still positive. The guys were sticking together, nobody was yelling at each other, and we slowly worked our way out of it. After we got home we went on a pretty big winning streak and kept it rolling. As soon as I got there I knew that this was a close group of guys and I had a good feeling right off the bat.

DO: What worked so well for you and Dylan Plouffe as a defensive pairing?

SB: I pride myself in playing a solid defensive game, and Dylan does too. But he’s a little more offensive than I am. But when he jumped up in the play offensively it allowed me to stay back and stay solid. When I saw an opportunity to go, I would too, but he mainly led the offensive charge and it didn’t take long for us to gel together.

DO: Are you ready for the pressure and increased responsibility of next season?

SB: For sure I am. I’m focusing right now on getting into better shape which hopefully allows me to take on an even bigger role with the team. I’d also like to play a bigger role with leadership both on and off the ice. I want to help the younger players as much as possible and help show them the way.

DO: Who were some of the older guys early on in your career that helped you?

SB: I’d say the captain Tyler Sandhu. Whenever you needed help he was always there. Dylan Coghlan was another guy who was always there to answer questions. Those two guys definitely helped me out the most.

DO: Who is the toughest Vancouver Giant to practice against?

SB: That’s a good question. I’ll give you a couple: Justin Sourdif and Lukas Svejkovsky are both really shifty. I’d also say Owen Hardy because he’s so strong and really hard to knock off the puck.

DO: With your summer training, is there one area that you are really trying to focus on?

SB: It’s been a little bit of everything, but the main thing is improving my cardio.

DO: How do you un-plug from hockey?

SB: Training is the top priority in the off-season for sure. But once that’s done for the day I like to relax and un-plug. One of my friends here has a boat so we’ve gone onto the Shuswap a few times. I’ve also golfed a few times, but my golf  game definitely needs some work, haha.

DO: Expectations for next season are understandably high. Does that change how you approach next season at all?

SB: If anything it makes you want to work harder. All of the teams are going to be gunning for us. So we have to keep working hard and not take anything for granted. It’s fun knowing that we should have a good team as long as we can all come together.

DO: Lastly, how much fun was it to play in front of the great fans during the playoffs?

SB: Our fan support has been phenomenal. It’s one of the best rinks to play in. Even my buddies from other teams have made comments to me about how much fun it is to play at the LEC. We are so thankful to our fans. Be ready for next year guys because it’s going to be a lot of fun.

“If anything it makes you want to work harder. All of the teams are going to be gunning for us. So we have to keep working hard and not take anything for granted. It’s fun knowing that we should have a good team as long as we can all come together.” – Seth Bafaro on the pressure and expectations of next season.