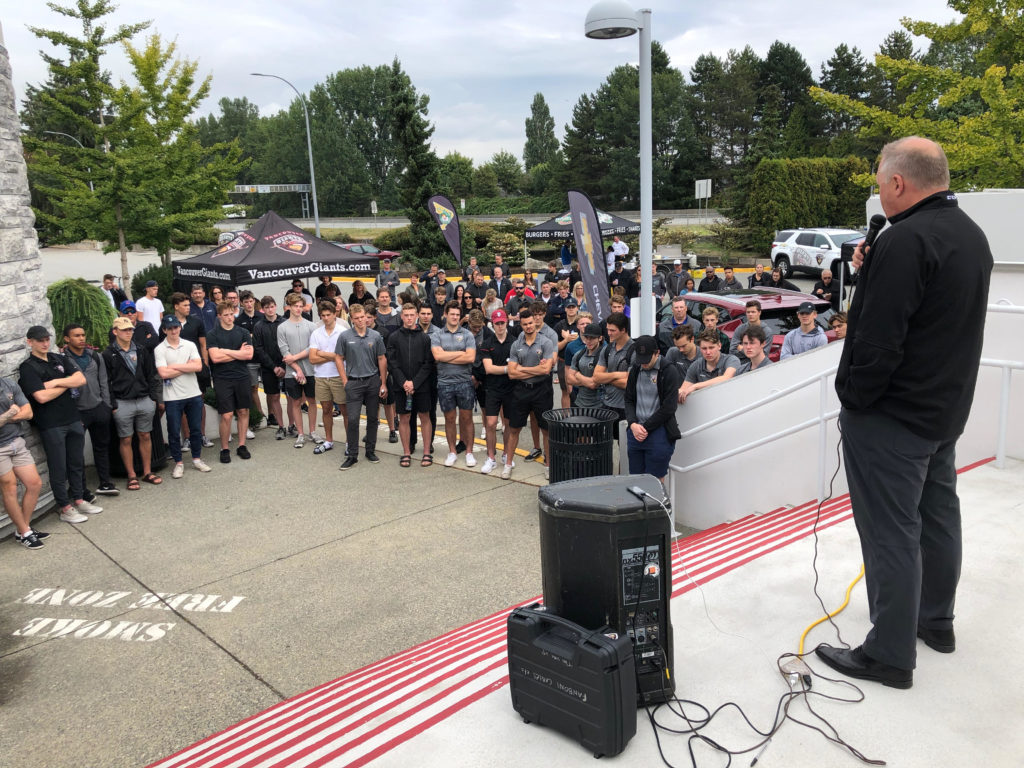 The 2019 Vancouver Giants hopefuls took the ice Friday for a full day of practices, games and fitness tests at Training Camp. Check out a full recap of the day’s events below:

“This time around, I have to be a leader..” – @SourdifJustin

Fresh off a summer trip to Europe with @HockeyCanada – Justin Sourdif is getting himself ready for a big second season in @TheWHL. #2020NHLDraft pic.twitter.com/s43f6hTkOS

Heading into Training Camp, Justin Sourdif is saying the right things. After posting 23 goals and 23 assists during his rookie season, he’s primed for bigger things in 2019-20. Sourdif is eligible for the 2020 NHL Draft. He scored twice on Friday and added an assist through two games.

After spending some time with the team last year as an under-ager, goaltender @Drew31Sim is back in town for his second @chevrolet Training Camp. Hear about his summer stint with @HockeyCanada and more right here! pic.twitter.com/5MqFJA2Wzm

Drew Sim was the second goaltender selected in the 2018 WHL Bantam Draft. He’s back in town for his second Training Camp with the Giants. Last season, Sim spent a fair amount of time with the Giants, practicing and familiarizing himself with the day-to-day routine. Plus, he’s coming off a U-17 Summer Development Camp with Hockey Canada that further helped his confidence and development.

OWEN HARDY IS SOAKING IT ALL IN

When you’ve attended Vancouver Giants Training Camp for six straight years you learn a thing or two. Owen Hardy talked about some of his early memories from his younger years and much more in a conversation with Dan O’Connor after his morning practice.

NIELSEN THRIVES AFTER A GREAT SUMMER OF LOCAL TRAINING

After a great summer of training locally in Delta, @tristen_080 is poised for a big season.

Today in scrimmages he had a goal, two assists and he hit A LOT of posts.

A great first full day for Nieler! Hear from him below… pic.twitter.com/x5ocxTDITE

Tristen Nielsen was hard to miss on Friday. In his first game with Team Kane he scored once and added two assists. He didn’t score in Game 2 against Team Lucic, but he hit three posts and came close on a number of other occasions. He trained locally this summer with Jordan Mackenzie and Ian Gallagher in Delta, and it has made a world of difference.

Real talk. @jacksonshepard9 is PUMPED to be a Vancouver Giant. Today he scored twice and added an assist through two games. Hear from one of the newest Giants below as Day 2 of @chevrolet Training Camp comes to a close. pic.twitter.com/yKZUGR7PvN

There’s no place like home. Jackson Shepard made a solid first impression on Friday. He scored twice and added one assist which tied him for the scoring lead on Day 2 of Chevrolet Training Camp.

KANE – Nearly 10 minutes into the first period Alex Kannok Leipert pounces on a turnover and rips it home.

GALLAGHER – Dylan Plouffe converts from the left point on a power play. Assists to Owen Hardy and Brayden Watts.

KANE – Kyle Bochek finishes off a give-and-go with Tristen Nielsen to restore the lead for KANE.

GALLAGHER – Justin Sourdif notches his first goal of camp after pouncing on a loose puck in the slot.

KANE – Tristen Nielsen converts in alone on a shorthanded, unassisted goal with under a minute remaining.

LUCIC – Early on Jackson Shepard wires home his first of camp in close off the rush.

LUCIC – With eight minutes to go in the first, John Little goes upstairs from the left-wing off the rush. Evan Patrician gets the helper.

*David Tendeck and Drew Sim combine for a clean 25 minutes to start the game.

LUCIC – Persistence pays off for Zack Ostapchuk who wins a battle beside the Kane goal and tucks a backhand home. His goal was unassisted.

LUCIC – Jackson Shepard strikes again. This time off the rush from the left-wing. Evan Patrician with his second assist of the game.

GALLAGHER – Colton Langkow finishes off a nifty three-way passing play at the left side of the goal. Owen Hardy and Justin Sourdif each draw assists. Just over six minutes remaining in the first half.

LUCIC – Back comes Lucic with under four minutes remaining. Evan Patrician converts in close off a Jadon Joseph pass. Jackson Shepard earns an assist as well.

GALLAGHER – Nolan Larson strikes for a second time. This time off a side-door setup from Justin Lies.

GALLAGHER – With just under three minutes to go, Nic Draffin solves David Tendeck to make it a 5-2 game.