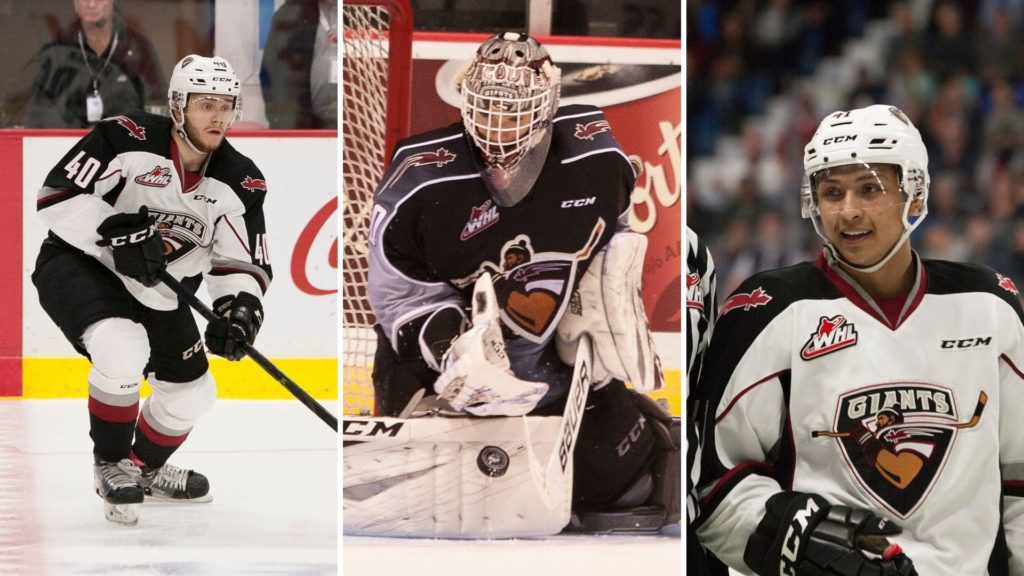 Just over one year ago, the Vancouver Giants were bracing themselves for a busy 2018 NHL Draft weekend. There had been plenty of build up to the draft with forward Milos Roman receiving a majority of the press. But fresh off a return to the WHL playoffs, and a season filled with breakout performances, the Giants organization was extremely confident that others would receive that life-changing phone call from an NHL organization.

Prior to 2018, the Vancouver Giants had seen 27 players drafted to the NHL from their program and since 2002 the Giants had at least one player selected in 14 of the 17 NHL drafts since their inception to the WHL. That number is now at an even 30 due to the fact that Milos Roman (Round 4 – Calgary), David Tendeck (Round 6 – Arizona) and Alex Kannok Leipert (Round 6 – Washington) were all selected in the 2018 NHL Draft. That number is guaranteed to grow even higher following the 2019 NHL Draft that’s taking place in Vancouver on Friday and Saturday this weekend. Before the focus completely shifts to 2019, here are some 2018 NHL Draft Reflections courtesy of Milos Roman, David Tendeck and Alex Kannok Leipert.

“I had spoken with the Calgary Flames at the NHL Combine and had a great interview with them,” said Milos Roman on the day he was drafted to the NHL. At the time, Roman was ecstatic that he was drafted to a city that was close in proximity to Vancouver and within the country of Canada. The Calgary Flames clearly prioritized Milos Roman as they ended up trading up in the draft to select him 122nd overall in Round 4. Had Roman not had to deal with a lengthy injury during his first full season with the Giants, it’s practically a certainty that he would have been selected even higher. To this day, the Calgary Flames likely feel that they got one of the biggest “steals” of the 2018 NHL Draft.

“It was a huge day for my entire family. They have supported me my whole life and to be able to watch the draft with them was a dream come true.” – Milos Roman on the day he was drafted to the NHL by the Calgary Flames.

Milos Roman followed up his rookie season with a wonderful second season in the WHL. In 59 regular season games with the G-Men, Roman set new season highs in goals (27), points (60) and led all Giants with 17 power play goals. He represented Slovakia at the World Juniors for the third time in three years and helped guide the Giants all the way to Game 7 of the WHL Finals against the Prince Albert Raiders. Roman scored twice for Vancouver in Game 7. The Calgary Flames have until June 1st, 2020 to sign him to an entry-level contract.

“I was on my deck at home when my phone started ringing and a representative from the Coyotes called. It feels like such a long time ago,” recounts David Tendeck as he reflects on all that has transpired in his life over the course of the past year.

David Tendeck came into the 2017-18 season as a bit of an unknown, but when all was said and done he was easily one of the biggest ‘feel good stories’ for both the Vancouver Giants and the Western Hockey League. After becoming the defacto number one goaltender for the Giants one week before the start of the regular season, Tendeck caught fire in late November and never looked back. He finished his sophomore WHL campaign with a record of 25-15-3-2, three shutouts, and a .912 save percentage. For his efforts he was named a second-team Western Conference all-star.

Heading into the draft, he knew the odds were good that he’d be picked. But you never really know until you know.

Tendeck adds, “I started to get a lot of my friends texting me and calling me and congratulating me. Then I put my phone down for 10 minutes to celebrate with my parents and family. The whole day was definitely a whirlwind.”

Did he expect the Coyotes to pick him?

He laughs, “The Coyotes were not on my radar at all. I didn’t speak with them much. But I couldn’t be happier that things worked out the way that they did. I guess it’s usually the team that doesn’t talk to you that picks you.”

When it comes to his second NHL Summer Development camp and all that lies ahead, David Tendeck’s perspective is as mature as you’d expect:

“Your first experience at an NHL camp is one that you just have to take in, keep your ears open and watch and learn how the older guys go about their business. I feel a lot more prepared and I’m ready to take it by storm.” – David Tendeck speaking on what lies ahead for him this summer.

As for the 2019 NHL Draft, Tendeck will be at Rogers Arena cheering on his teammate and friend Trent Miner who is hoping to hear his name called in the early rounds.

Tendeck said, “I’ve been talking with Trent quite a bit. I’m going go sit with him in Vancouver and support him throughout the draft. It’ll be awesome to see him and talk to him.”

The final Giant selected on June 23, 2018 was defenceman Alex Kannok Leipert. The Regina, SK native was literally getting ready to graduate high school and admitted that he was feeling a wave of uncertainty heading into NHL Draft Day.

“I had been talking to them (Washington) leading up to the draft, but I wasn’t sure because I hadn’t really heard anything from my agent or them in awhile,” said Alex Kannok Leipert in an interview from his Regina home earlier this week. I was hoping for the best, but I was going to be okay with whatever happened. I was pleasantly surprised and shocked by it all when I got that phone call.”

An hour before before he had to get in his car and head to his graduation ceremony, he got the call.

He adds, “It was all just kind of a blur. It happened very quick. I was getting ready for graduation then my agent called and told me the news. Then I’m getting messages all over the place. I hung up with my agent, and my next phone call was from Bowen (Byram) who was screaming in my ear. It was pretty awesome.”

The turnaround was a quick one for Kannok Leipert who less than 12 hours later was in Washington, DC getting ready to take the ice for Capitals Summer Development Camp. Looking ahead to this season, the defenceman has a much clearer idea of what to expect.

“I have to take more responsibility now. I know what to expect. I have to be at my peak performance and take in all of the information that they have for me. I’m ready to get it started.” – Alex Kannok Leipert looks ahead to his next NHL camp opportunity.

Alex Kannok Leipert joins the 2018 Stanley Cup champions as he goes to the Caps in the sixth round (161st overall). Congrats Alex! What an amazing day this must be!