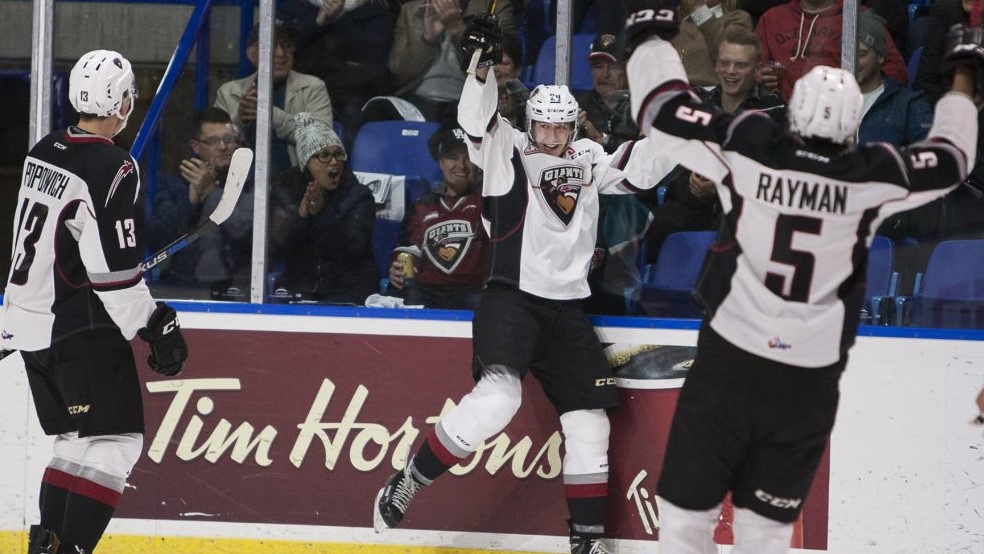 The line of James Malm, Ty Ronning and Brayden Watts combined for eight points to lead the Vancouver Giants to an exciting 5-4 victory over the Kelowna Rockets on Friday night at the Langley Events Centre. Ronning had two goals, Malm and Watts had one each, and Tristyn DeRoose scored his first career WHL goal in the win. Ryan Kubic made 32 saves on 36 shots for Vancouver.

DeRoose opened the scoring at 9:23 of the first period, scoring from in tight after a pretty setup by 16-year-old Tyler Popowich. Watts made it 2-0 on a power play later in the frame when he wired a slap shot past Kelowna goalie Brodan Salmond from the left circle. Calvin Thurkauf put the Rockets on the board late in the stanza.

Malm got credit for a strange goal early in the second period when the Rockets scored in their own net during a delayed Vancouver penalty. Ronning tallied his first of the evening just after the midway mark of the game, finding the net from the left wing after Malm fed him the puck. Cal Foote scored shorthanded for Kelowna, and Kyle Topping added an even strength marker just 1:05 later to pull the Rockets back to within one goal before the end of the period.

Rodney Southam bagged a third period power play goal on a scramble in front of Kubic’s net to tie the game, but Ronning got the eventual game winner with under four minutes to go, beating Salmond from the front of the net after Watts found him with a pretty pass from below the goal line.

Ronning’s game winner was the Insurance Goal of the Game.

Kelowna out shot Vancouver 36-25. Vancouver went 1-for-6 on the power play.

The Giants will visit the Seattle Thunderbirds on Saturday night at 7:05pm.

Vancouver’s next home game is on Monday evening against the Prince George Cougars at the Langley Events Centre. Puck drop is set for 7:00pm. For tickets, click here or call 604.4.GIANTS (604.444.2687).