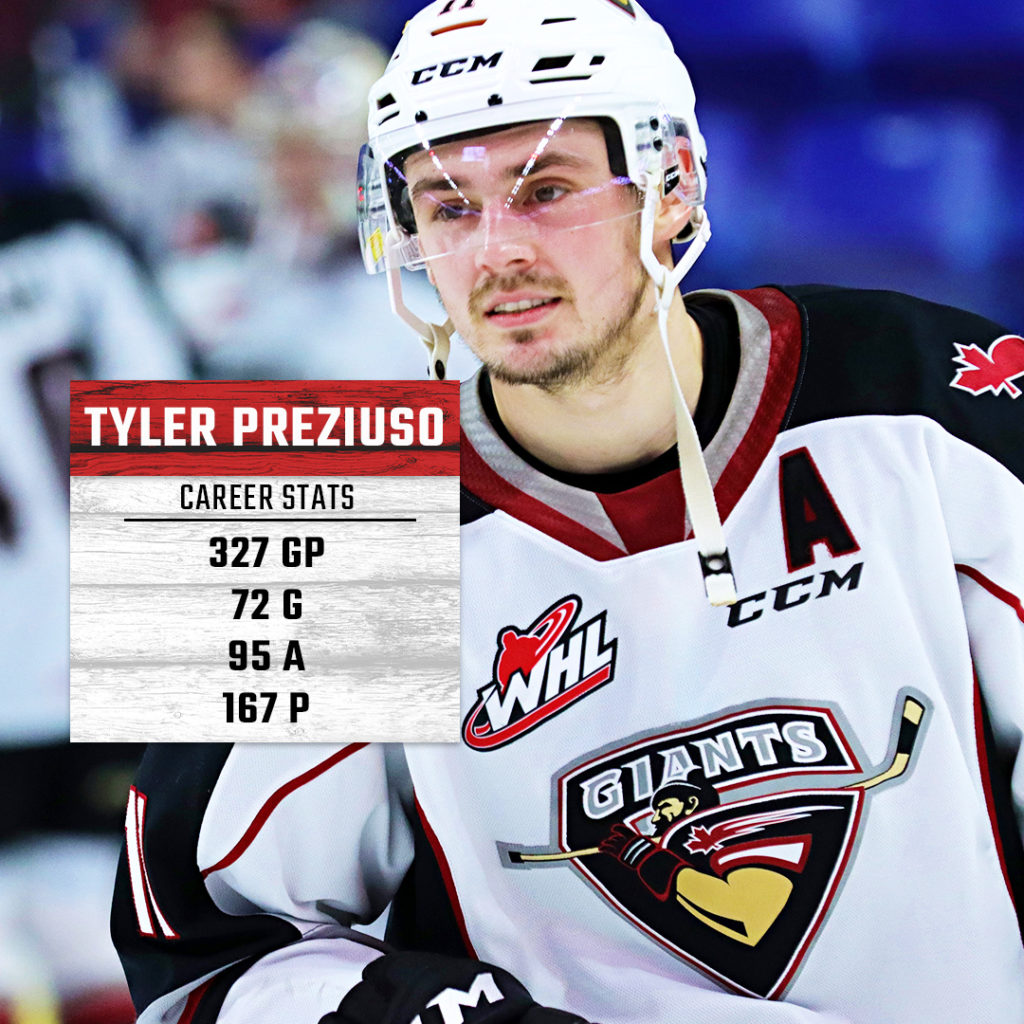 In early December the Vancouver Giants made a blockbuster trade with the Medicine Hat Tigers which shifted the course of their 2019-20 season. The Giants dealt veteran d-man Dylan Plouffe along with skilled forward Lukas Svejkovsky to the Tigers in exchange for veteran forward Tyler Preziuso and steady defenceman Trevor Longo.

TRADE 🔁: The Vancouver Giants have acquired forward Tyler Preziuso, defenceman Trevor Longo, a 2020 first-round pick, and a conditional fifth-round pick in 2021 in a blockbuster trade with the @tigershockey.

At the time of the trade, Preziuso had nine goals along with 13 assists for 22 points in 28 games with the Tigers. He was an alternate captain and was the active leader in career WHL games played. He made an immediate impact with the Giants, scoring twice in his Teddy Bear Toss debut on December 8th against Tri-City and was named the game’s first star:

Tyler Preziuso gets a good bounce for his 17th of the year, also on the power play, to give the @WHLGiants a quick 2-1 lead. Giants PP is 2/4 tonight. #WHL pic.twitter.com/7Ufsdpnli7

Vancouver Giants head coach Michael Dyck speaks about his acquisition and how he fit in with his new team:

“We knew that he was a guy that brought a lot of speed, energy, tenacity and the ability to finish around the net. We figured he’d fit in with our identity. We also heard a lot of good things about him as a person, so we knew that he was integral part of their (Medicine Hat’s) room and a good teammate. He certainly lived up to the billing and was a big part of a really good second half for us. He became a big part of our room and earned himself a ‘letter’ along the way. He was also a really popular guy in the room. He played key minutes for us in all situations and was just really reliable.”

Dyck on what lies ahead for him:

“I know he has a lot of CIS schools that are very interested in having him come and play for them. But I wouldn’t rule out pro hockey from his realm of possibilities. Whether it’s in the sort-term or down the road.”

Michael Dyck on Tyler Preziuso’s impact with the Vancouver Giants:

“I have a lot of appreciation for him for making the impact that he did with our group. He was such a positive presence. He helped us turn things around. We made a big turnaround in the second half and he was a big part of that. He was a really good guy to deal with and it was always nice to have a guy like that for the coaches to talk to and lean on. He was a really pleasant guy, always great to talk to and a very mature person.

The entire Vancouver Giants organization would like to extend a heartfelt thank you to Tyler Preziuso for the positive impact and legacy that he leaves behind. Good luck in both hockey and in life, and please don’t be a stranger!