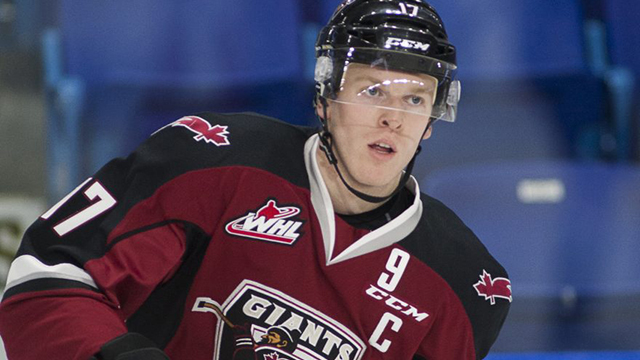 The Vancouver Giants are pleased to announce that 1998-born forward Tyler Benson has been returned to the team by the Edmonton Oilers and will take the ice for practice tomorrow afternoon at the Ladner Leisure Centre.

Benson last played a game with the Giants on January 2nd in Calgary where he posted a goal and an assist in a 5-4 Giants victory. He missed the remainder of the 2016-17 season due to injury. Prior to his injury, Benson managed 11 goals and 31 assists for 42 points in 33 games. During the offseason, Benson underwent sports hernia surgery and has been recovering and training under the watchful eye of the Edmonton Oilers medical staff since. His exact return to game action has yet to be finalized.

Originally selected by the Giants with the first overall pick in the 2013 WHL Bantam Draft, Benson has registered 34 goals and 81 assists for 115 points in 132 career WHL games. He was named captain of the Giants in September 2015 and In June 2016 he was selected 32nd overall by the Oilers in the NHL Draft. He signed a three-year entry level contract with Edmonton in December that year.

Internationally Benson twice represented Canada at the World Under-17’s and also donned the Maple Leaf with Team Canada at the 2015 World Under-18’s and the 2015 Ivan Hlinka Memorial Tournament. Last week he was named to Team WHL’s roster for the 2017 CIBC Canada Russia Series marking the second straight season that he’s represented the Giants and the WHL at that event.