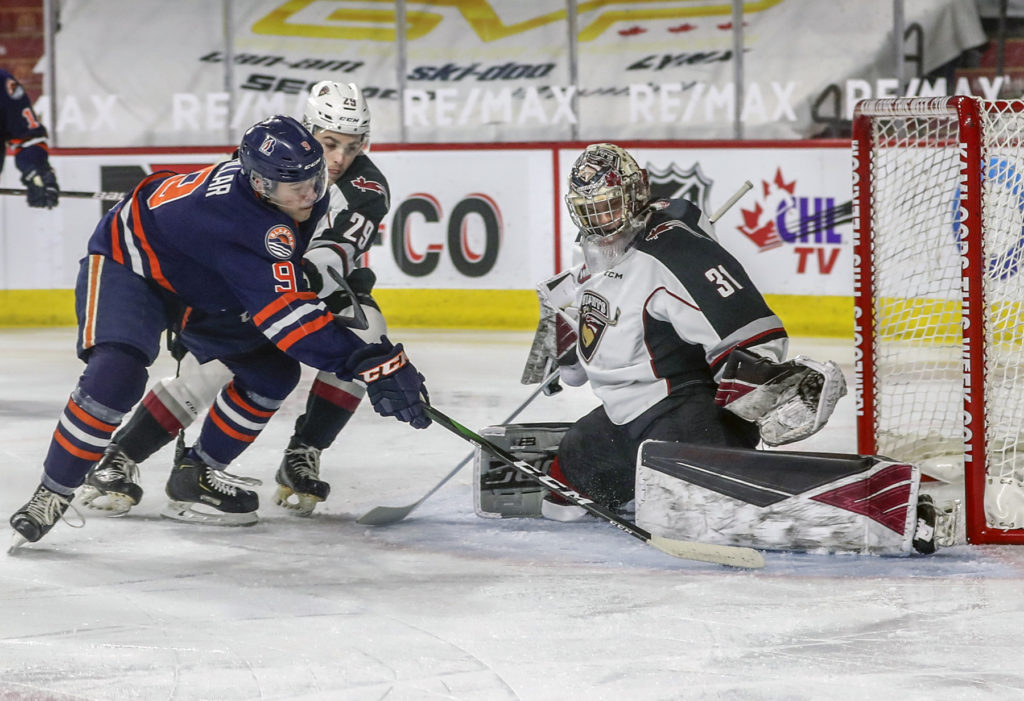 Make it nine periods and counting for Trent Miner without surrendering a goal against for the Vancouver Giants. Monday evening in Kamloops, Trent Miner turned aside all 30 shots he faced to secure his third straight shutout as the Vancouver Giants (4-1) defeated the Kamloops Blazers 4-0. Justin Sourdif (1G, 1A) and Tristen Nielsen (2A) each had two points for Vancouver while Zack Ostapchuk, Justin Lies and Adam Hall also supplied goals. For Kamloops it marked their first loss of the season.

VAN – 10:14 into the game, 2021 NHL Draft hopeful Zack Ostapchuk forced a turnover at the Kamloops blueline, raced wide on the Kamloops defender on the right-wing and wired a low shot through the legs of Dylan Garand in close to stake the G-Men to a 1-0 lead.

VAN – Justin Sourdif recorded his 50th career WHL goal off a turnover near the Kamloops goal. Rookie defenceman Nicco Camazzola pushed a puck free to Justin Sourdif in the slot, and from there the Florida Panthers draft pick did the rest, tucking a backhand deke home to give Vancouver a 2-0 lead.

VAN – With 1:55 left in the period, Justin Lies (1) pounced on a loose puck off a Kadyn Chabot faceoff victory and he wired home a high shot from the slot to make it a 3-0 lead for the Giants.

*2:18 into the third period, Giants forward Justin Lies was assessed a five-minute major penalty for checking-from-behind. Kamloops forward Peyton McKenzie did not return to the game after the collision.

VAN – Adam Hall knocked home the game’s final goal off a redirect in front of the Kamloops goal. Justin Sourdif and Tristen Nielsen both earned assists on Hall’s fourth goal of the season.

Next Giants Game: Wednesday evening at 7:05 PM against the Victoria Royals in Kelowna.

“The score didn’t reflect how close the game was. We battled right to the end. Our team was rock solid all the way through.” – Goaltender Trent Miner after his third consecutive shutout.

“We didn’t have any weak links on our team tonight. We played our best hockey and that’s what it’s going to take to beat Kamloops. Everybody played as well as they could tonight and that’s why we won.” – Justin Sourdif after posting a goal and an assist.