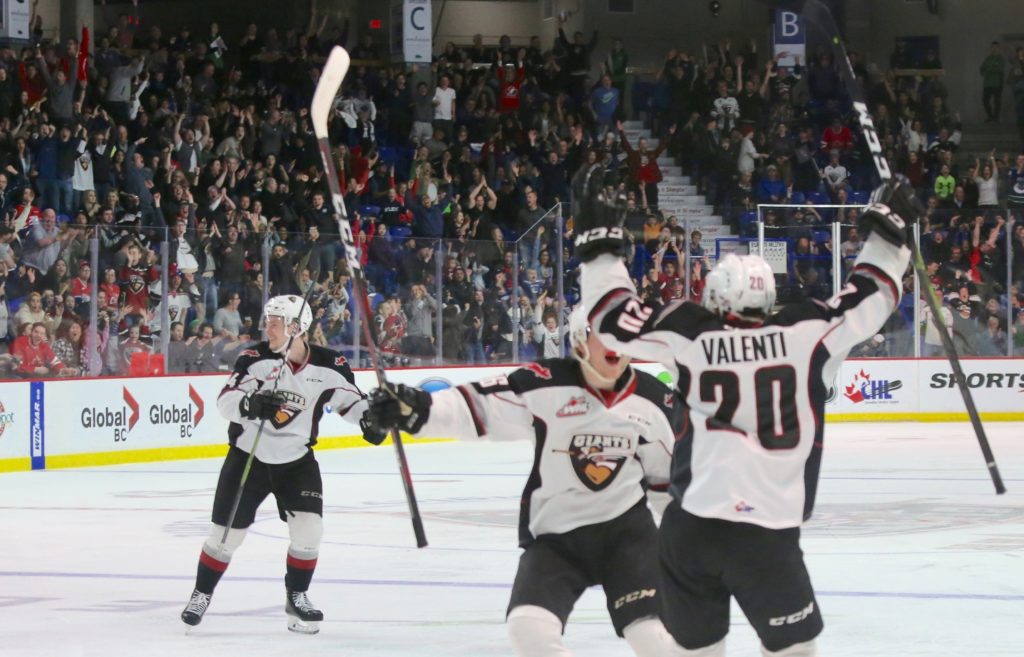 A span of three minutes and 21 seconds changed ‘everything’ for the Vancouver Giants on Saturday night on home ice. Despite trailing 2-0 going into the third period the Giants rattled off four goals in a span of three minutes and 21 seconds en route to a 4-2 victory over the Spokane Chiefs in Game 2 of the WHL’s Western Conference Championship series. Giants captain Jared Dmytriw scored twice in a 22-second span while Dawson Holt and Yannik Valenti added goals for the Giants who played in front of a jubilant crowd of 4746 at the Langley Events Centre. Jaret Anderson-Dolan and Noah King had the goals in response for Spokane. In goal David Tendeck earned the victory for the Giants stopping 24 of Spokane’s 26 shots while Bailey Brkin made 40 saves on 44 shots faced for the Chiefs. The Giants now take a 2-0 series lead to Spokane next week.

SPO – With 19 seconds remaining in the first period, Noah King’s shot from the left-wing point found its way through traffic and by David Tendeck for his first goal of the post-season marking the first lead of the series for Spokane.

SPO – 19 seconds into the middle-frame Jaret Anderson-Dolan potted his first goal of the series and his fourth of the playoffs when he pounced on a Jake McGrew rebound and stuffed it across the line. Ethan McIndoe added the second helper.

VAN – 5:15 into the third period the Giants caught a break when Alex Kannok Leipert’s shoot-in from the neutral-zone took a favourable kick off the right-wing glass and right onto the stick of Dawson Holt who was skating down the left-wing. Holt quickly zapped a shot past  Bailey Brkin to put the Giants on the board.

VAN – Just under two minutes later the Giants tied the game when captain Jared Dmytriw (5) stuffed a Justin Sourdif rebound past Bailey Brkin to send the LEC crowd into a frenzy. The Giants weren’t finished yet.

VAN – 22 seconds later Jared Dmytriw (6) struck again. This time off a quick shot from the left-wing circle off a Dawson Holt feed. Seth Bafaro added the second assist on what proved to be the eventual game-winner.

VAN – The Giants got some insurance at 8:36 in the form of a Yannik Valenti (1) rocket from the left-wing circle on a power play. Valenti’s one-timer was set up by Davis Koch and Dylan Plouffe. It was his first goal since November 16th, 2018.

Spokane: 0/2 on the Power Play

Next Game: Tuesday night in Spokane at 7:05 PM.