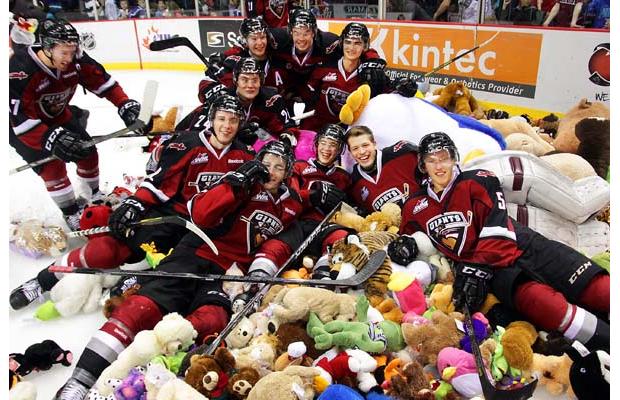 The Vancouver Giants are excited to remind you that everyone’s favourite holiday hockey tradition – the Teddy Bear Toss – is coming up fast!

Join us Friday, December 18 at 7:30pm as we take on the Everett Silvertips for Teddy Bear Toss, presented by TELUS!

Fans are encouraged to bring a new stuffed toy to the game, or you can buy one on the concourse with proceeds benefitting The Province Empty Stocking Fund and the CKNW Orphans’ Fund.

Then . . . when the Giants score their first goal . . . THROW THEM ON THE ICE!!! We’ll then collect all the bears and the good folks at the Lower Mainland Christmas Bureau with make sure they find a warm, loving home in time for the holidays.

And while we’re on the subject, let’s take a look back at Teddy Bear Goals from years past! Click the year to WATCH:

WHO WILL SCORE THIS YEAR’S TEDDY TALLY? Tell us your pick on Twitter or Facebook for a chance to WIN tickets to an upcoming game.