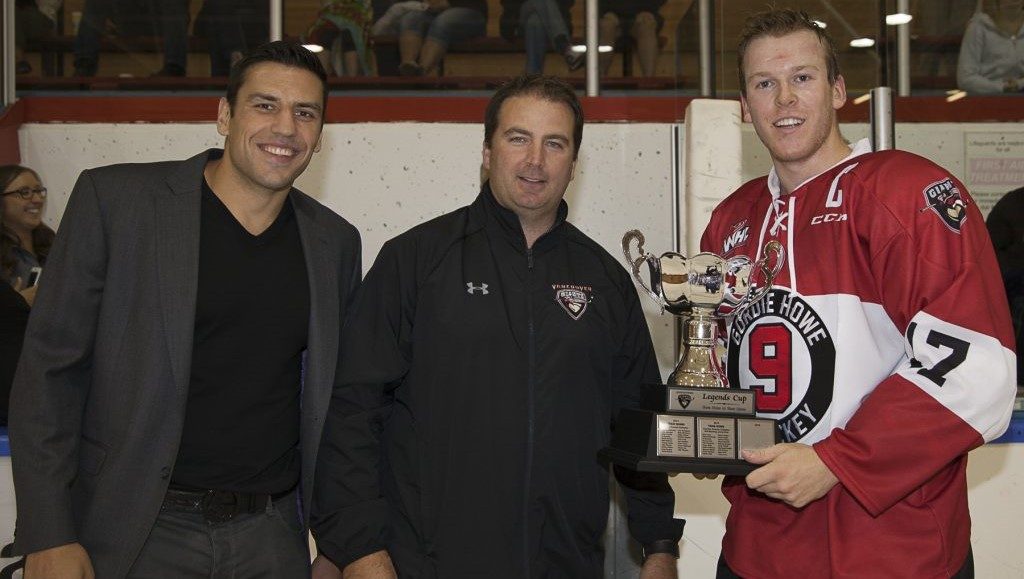 James Malm netted a goal and two assists to lead Team Howe to a 4-1 victory over Team Quinn in the annual Alumni Challenge Intrasquad Game on Tuesday night at the Ladner Leisure Centre. Former Giant, and current Edmonton Oiler, Milan Lucic coached the winning team while Andrew DeSousa, who was a part of the original Giants team in 2001, was behind the bench for Team Quinn.

Malm opened the scoring in the first period, knocking a rebound past Jake Morrissey on a man advantage. Later in the stanza, Johnny Wesley added to Team Howe’s lead with another goal from in close.

Team Howe held the two-goal lead until the opening minute of the third period when Owen Hardy put Team Quinn on the board, scoring on the power play with a beautiful wrist shot that beat Team Howe goaltender Trent Miner on the short side. Team Quinn looked to have an opportunity to tie the game on a power play just a few minutes later, but youngster Max Bulawka scored a shorthanded marker for Team Howe to make it 3-1. Rookie Lukas Konashuk added another goal later in the period for Team Howe.

Ryan Kubic and Trent Miner combined to help Team Howe to the victory. Kubic stopped all 10 shots he faced in the first half of the game while Miner allowed one goal on 16 shots.

The Alumni Challenge brings an end to 2016 Vancouver Giants Training Camp, presented by Hyundai. The G-Men will open the pre-season on Friday afternoon when they face the Spokane Chiefs at the Everett Silvertips’ Annual Pre-Season Tournament at the XFINITY Arena. Puck drop is slated for 3:00pm.